Yesterday was the big day.  Jay, his mom, my mom, and I loaded up and headed down to Canon City.  Jay had a list of horses he wanted to look at, thanks to Amanda who runs the Canon City Mustangs page.

Jay's list was just a starting point; he wasn't absolutely in love with any of the horses, but thought he could start looking with the list and go from there.  We learned from our first trip to the prison that their inventory list had notes on each of the horses, so with a list of numbers, the guide could look up which pens the horses were in.  It turned out that the numbers really just guided us to the pens, and while we looked for the listed number, only one of the listed horses made the finals.

Pretty quickly, Jay found a dark bay 3 year old with the cutest "poofy" forelock.  He was darling and really, really liked Jay.  Definitely a consideration.  The drawback was that he was 3 and still had some growing to do.

A few pens later, another dark bay with a wide heart-shaped blaze picked him out.  He wasn't overly friendly with Jay, but showed interest and kept his eye on Jay the whole time we were in the pen.  Contestant number two happened to be one of the numbers we had listed.

In the 5 year old pen, Jay was immediately picked by a flea-bitten grey gelding who was sweet as pie.  So very sweet, but severely cow-hocked and unable to do what we want to do with him.  Someone needs to go adopt that boy and make him a grandkids horse.  He has the perfect temperament for a kids horse (or a very small adult) and it broke my heart to leave him behind.  Truly, if we had space and time for a third ungentled horse, we would have adopted him in a heartbeat for all the nieces and nephews.

There was another couple with us who had their own list, so we took turns going to the pens we each wanted to take a peek in.  It was in one of "their" pens that Jay's horse found him.

We walked into the pen and a big sorrel looked up from across the pen, ears up, and started walking toward us.  I hoped he had chosen Jay, but Jay was walking right next to the male from the other couple and I couldn't immediately tell which one the horse had chosen.  I hadn't realized I was holding my breath until the other guy walked right past the sorrel and I could breathe again.

The big sorrel stopped and let Jay walk right up to him and pet him, but then two dark blue roans introduced themselves to Jay, taking his attention away from the sorrel.

The "test" that any horse that Jay chose had to pass was that other people had to be able to go up and touch/pet it.  Jay's mom and I walked up to the roans and loved on them for a bit.  The darkest of the blue roans was definitely a front runner, but he was a bit pushy and did not make the best impression on me when he pawed me with his hoof.  We already have one paw-er, we do not need a second one, but if it was the horse that chose Jay, we'd just work on it.

Jay stepped away from the sorrel, who just stood like a statue and looked at him, while I approached.  The sorrel allowed me to touch him all over and stood like a rock star.  After making sure other people would be allowed into the horse's space, Jay came back to join us.  Mom, Jay's mom, and I stepped back and let the roans re-join the little love-fest Jay had going on with the horses.

Jay was still loving on the sorrel, with the roan right next to him when he said, "I like this one."  Mom asked him, "compared to the 3 year old, who do you choose?".  Without hesitation, Jay answered, "this one".  Same answer when Mom asked him about the second horse on his list, again without hesitation.

When asked to chose between the roan and the sorrel, the answer was the same, "this one."

Jay's heart horse had found him. 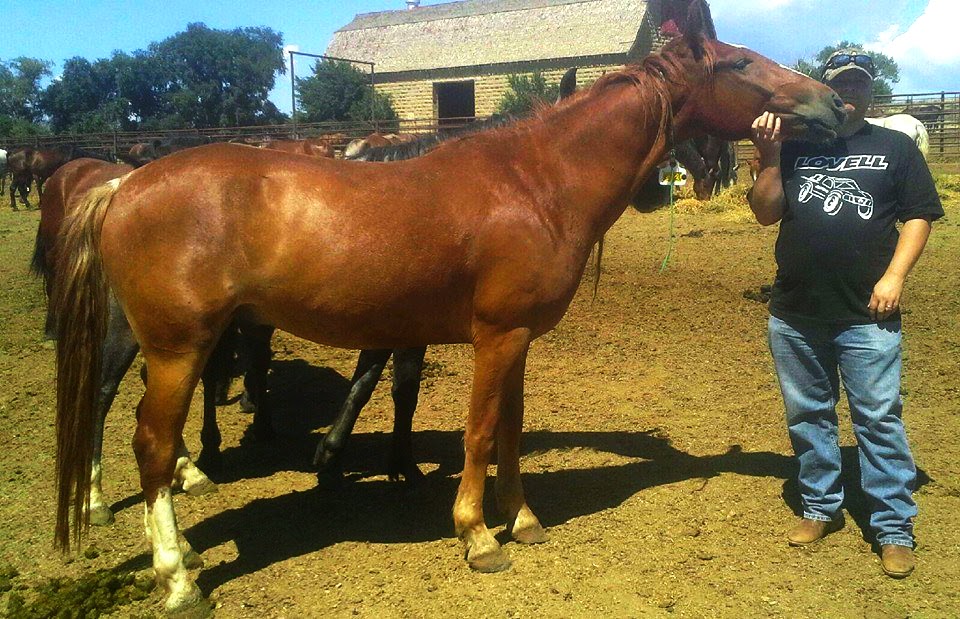 Is he handsome, or what?

Cannot tell you how happy this post made me! Those pictures! What a gorgeous boy! Look at all that chrome :)

I am so glad the horse picked him and it was so clear for Jay. He sounds like a great boy and I can't wait to read your training adventures!

So happy for Jay and his new friend.

It will be interesting to see how Copper deals with Jay's customizing tendencies.

Frostig is from Adobe Town...! In no time Copper will be Jay's Accountant, Time manager and best bud - seriously, they are VERY smart horses and learn quick !

Yay! Can't wait til you get to bring him home! He is very handsome, too. So happy for both of you :)

Congrats to Jay and his new buddy. Copper is a beautiful horse and appropriately named.

Now, I think Daddy Hawk may have an idea there.

Maybe some diamonds in his "grill"...

Bill, I can't wait to see the look on Copper's face when Jay tries to install a "fart can" muffler.