What a whirlwind today has been!

Jay was up bright and early this morning, but I wanted to stay in bed.  My logic was the later we slept, the less time we'd have to wait, but in the end, he won.  We got up, did some lawn stuff and I prepped Estes' pen for Skeeter.

I moved her purple blanket, Barney, to the gate in Estes' pen so she'd have her lovey with her and filled her kiddie pool with water in anticipation of her move.  The plan was for Copper to arrive between twelve and one p.m., so Bill was going to head out of the lodge as soon as he finished his chores.


With our preparation done by nine-thirty, Jay and I sat down to watch a movie.  I called Mom at eleven to see if Bill had left the lodge and to let her know that Copper left Canon City at nine-fifteen.  We settled back in to watch the movie, and right as it was getting good, Jay glanced out of the window, "is that my horse?  Oh shit!  My horse is here!".

He was right.  His horse was here.  An hour earlier than we had planned.  Jay flew out the door to get the panel to build the chute and I quickly changed out of my shorts into jeans and boots to grab Skeeter.

Skeeter was amazing!  She's never been a problem to halter, so I threw her rope halter on and marched her out of the pen to Estes' pen. There was none of that Tomfoolery from earlier in the week.  She walked right alongside me like she was ten years broke already.  I met L.E. on the way and she asked if we needed help.  I pointed her to the pen and told her the driver was early and to help Jay.

The only issue Skeeter had was at the gate to Estes' pen, but when I pointed her to Barney on the gate, she sniffed and stepped right into the pen.  I pulled the gate closed behind us and let her hand graze.  She was amazing, but I missed seeing Copper get unloaded.

It seemed like no time at all when L.E. came back to the pen and said it was okay to bring Skeeter back.  Skeeter again acted like a pro.  We stopped to graze and talk to the driver, who was the same one who delivered Skeeter three months ago.  I beamed with pride when he told me she looked good and was coming along well.  I like to think so, but it's nice to hear from someone who hadn't seen her since she was dropped off.

Skeeter didn't realize that anything unusual was going on until she was almost in the pen, then she saw Copper.


Once it was obvious there weren't going to be any fireworks, I turned Skeeter loose to properly meet her brother. 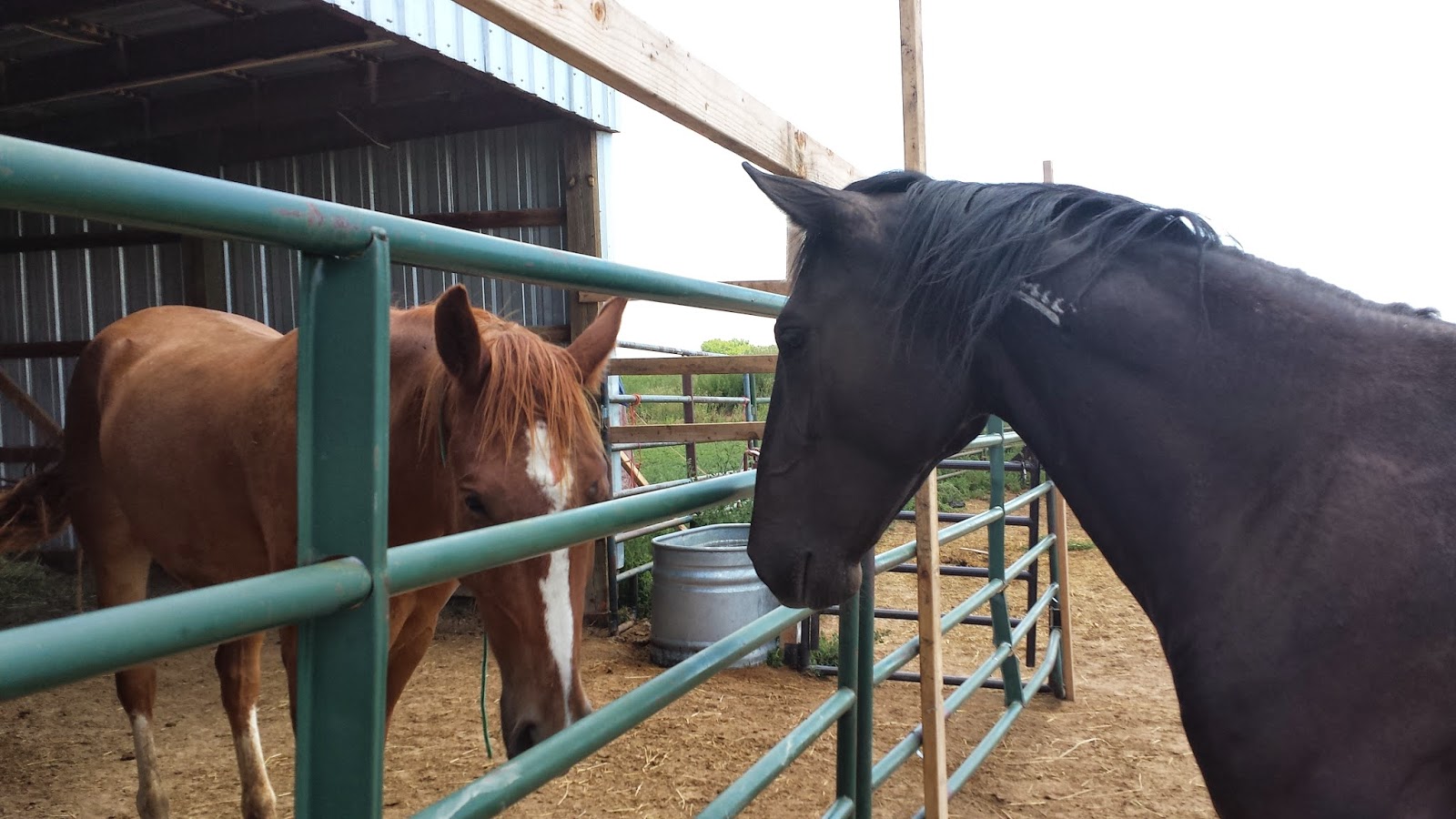 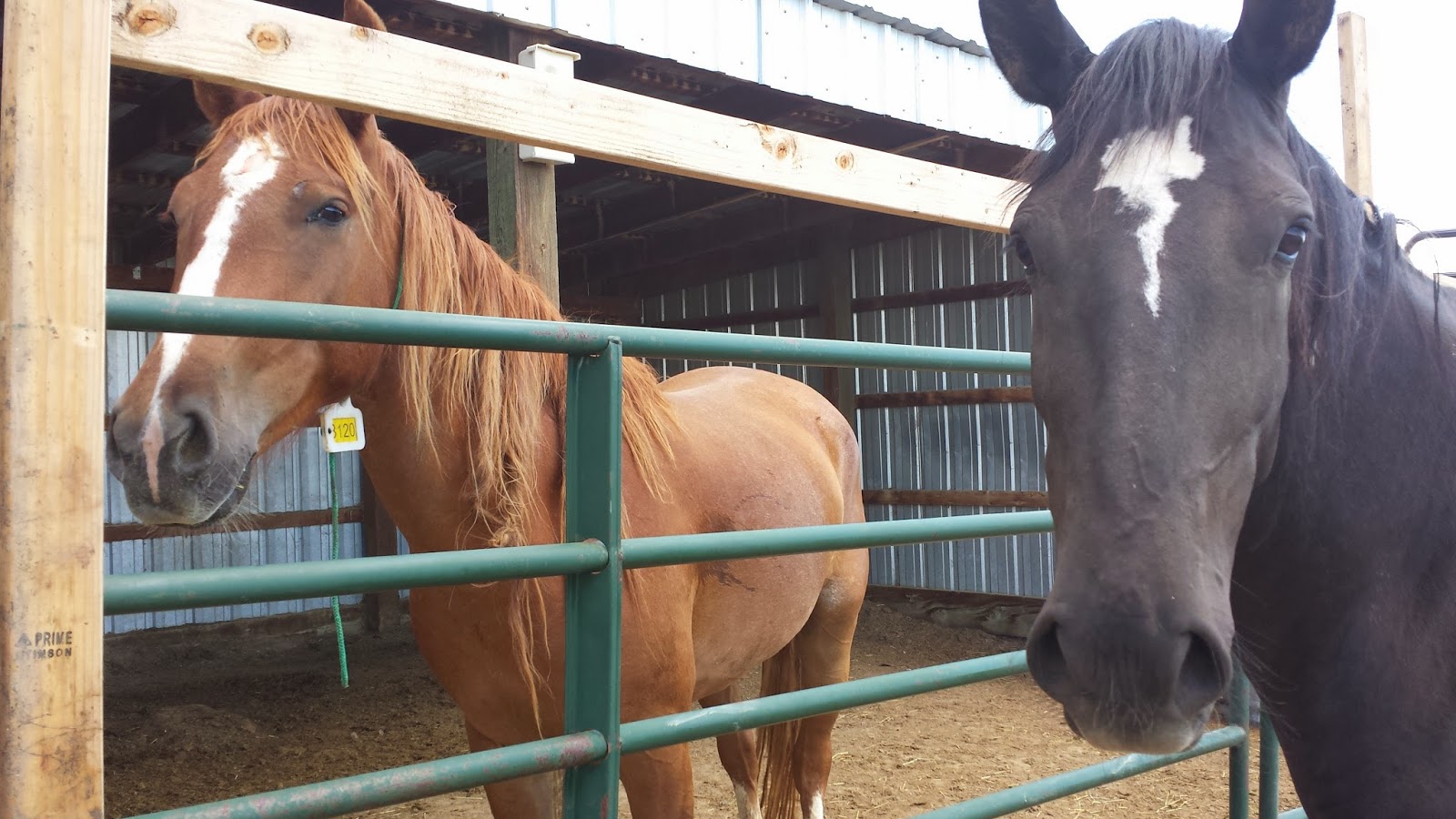 Turns out, Copper does a great giraffe imitation.  I actually was worried that the six foot fence wasn't tall enough when I saw his whole head clear the top rail. 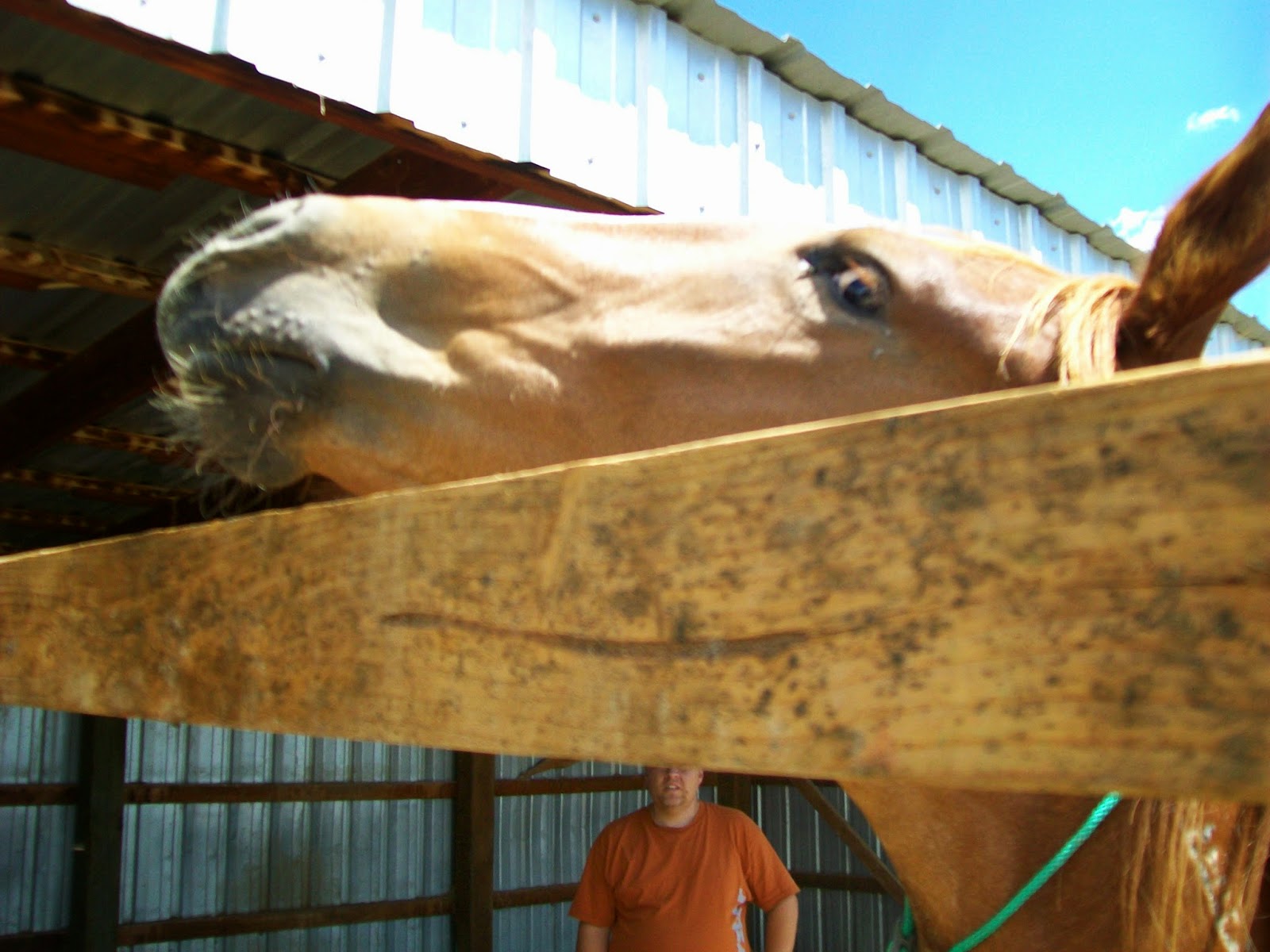 He's learned so much today. He didn't really want anyone touching him, but finally allowed Jay a touch through the fence. 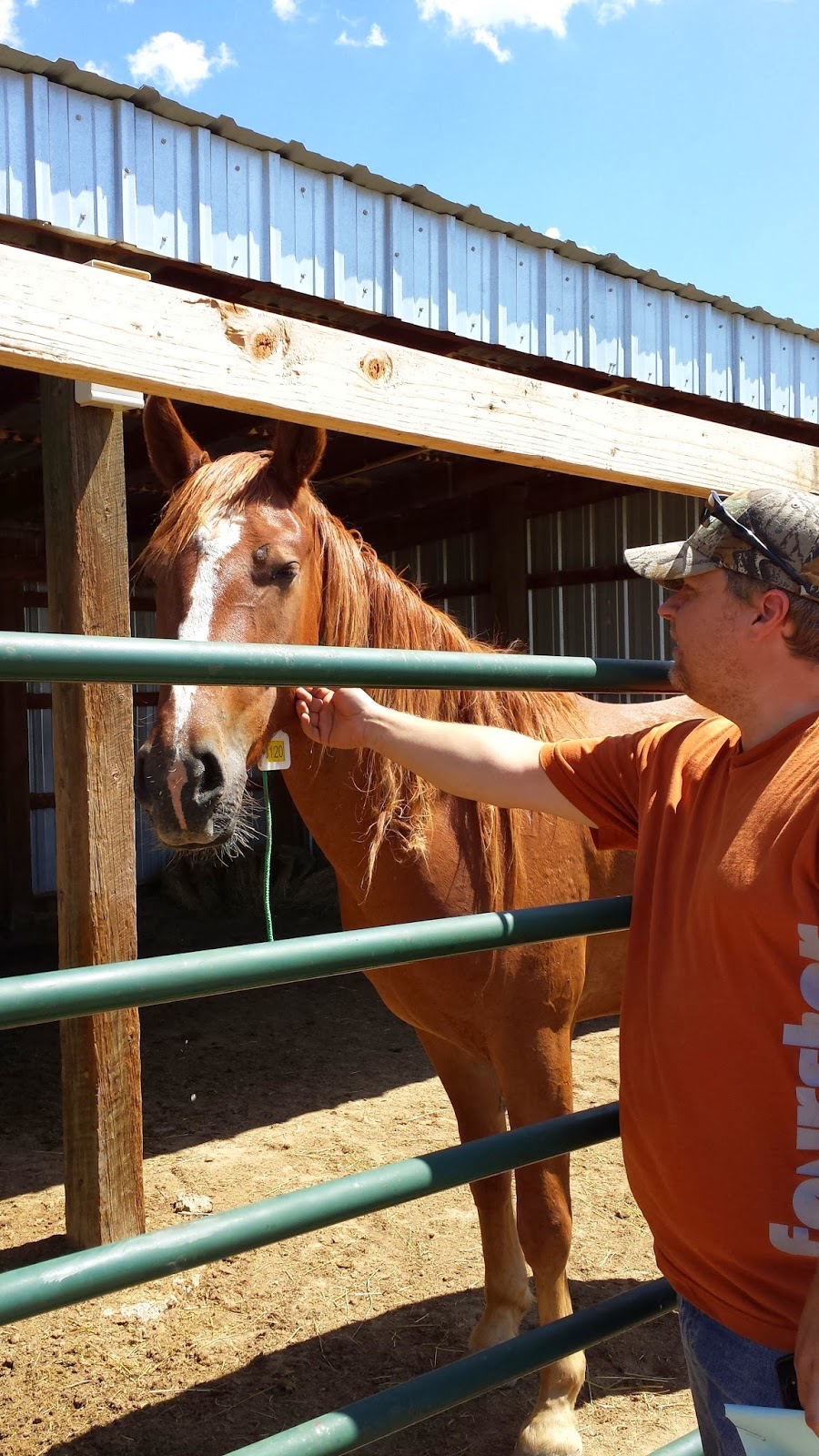 
Jay's got a good sense of timing and kept the sessions short.  Once he got to rub Copper, he left the pen so Copper could think about it.

When he went back in, he was able to take Copper's neck tag off without any drama. 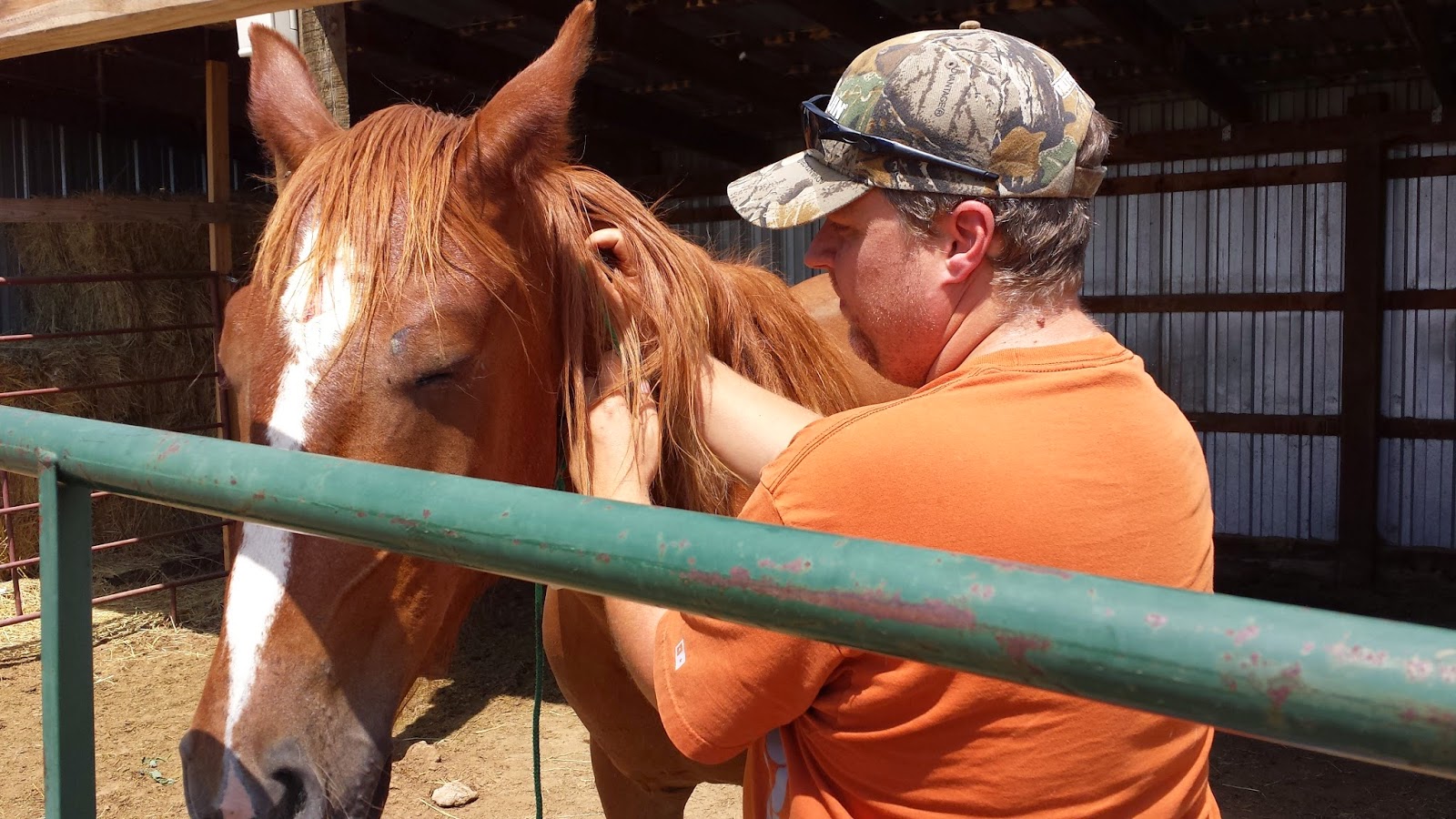 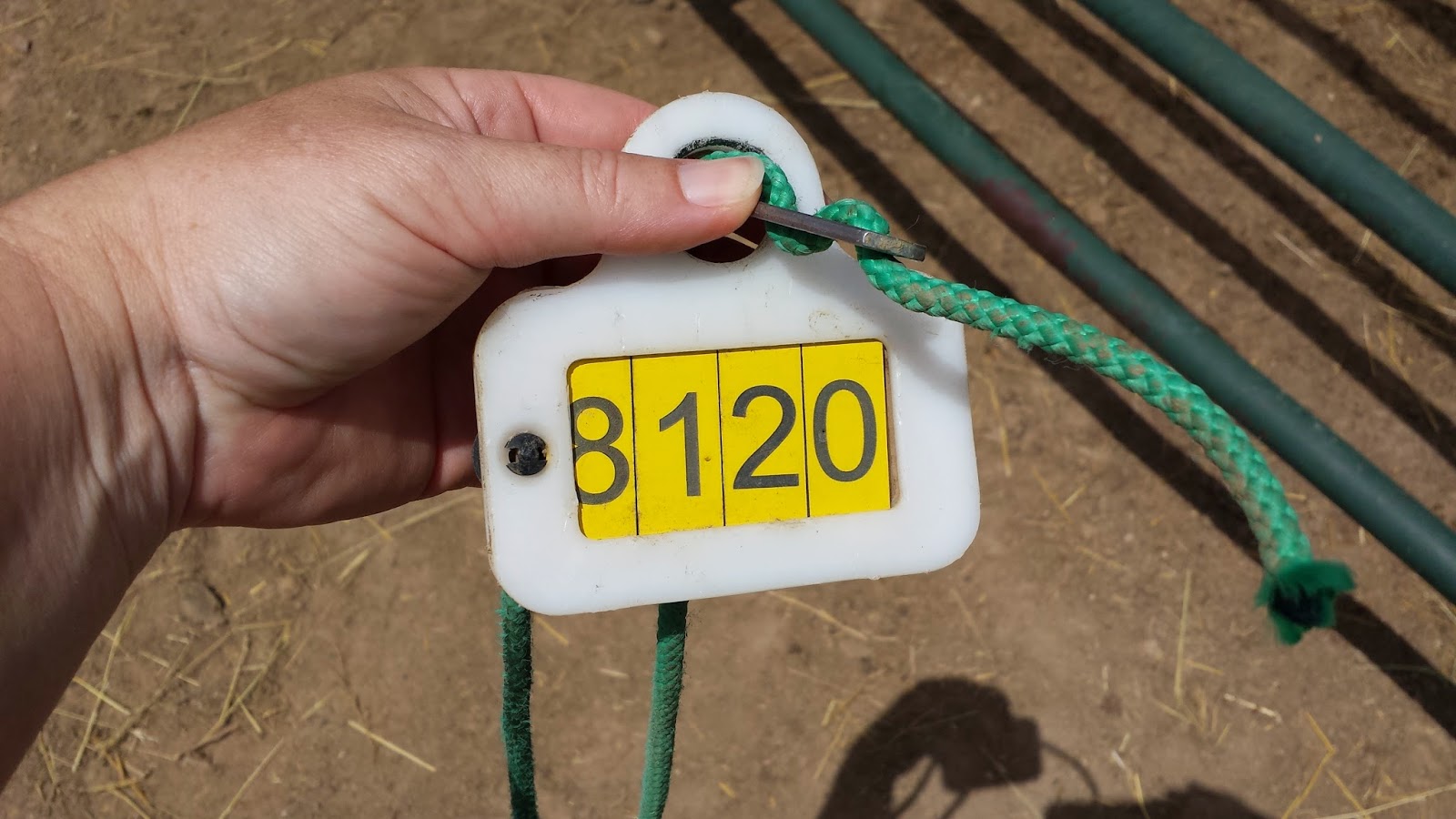 Copper was so happy, he immediately laid down to roll with Jay in the pen.  Guess he feels safe here already.

The third time Jay went into the pen, Copper decided that his human was useful and not only allowed Jay to rub on him, but run the brush along his sides. 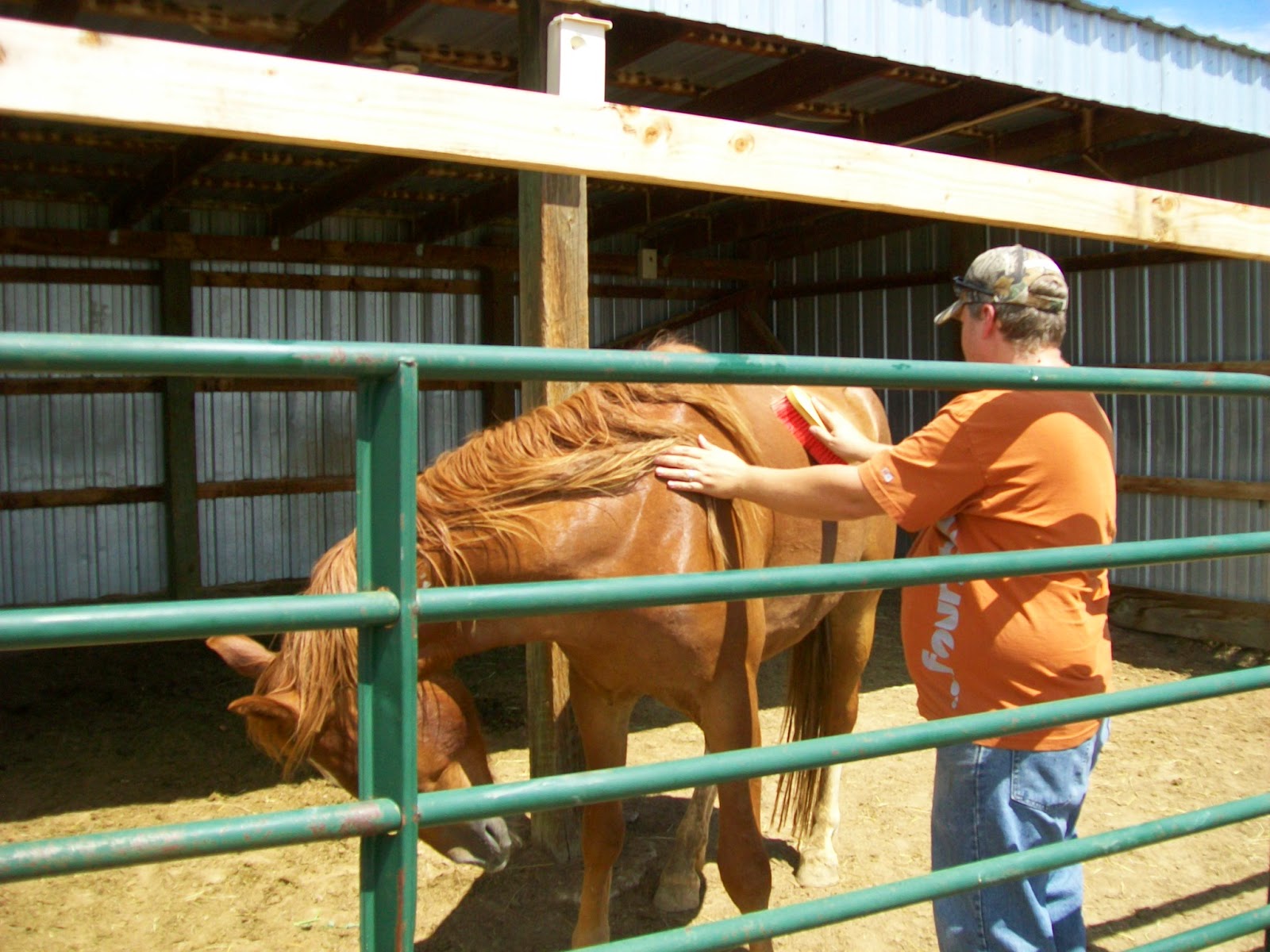 Copper enjoyed it so much that when Jay was done, he hooked on and followed him around like a puppy for a couple of figure eights.  Only when he realized the brush wasn't coming back, did he allow himself to be distracted by the hay in the corner.


About four-thirty Jay's family started showing up and by that time Copper had had enough time to think it over and decided that humans weren't too bad.  Every single one of Jay's family was able to pet Copper through the fence.

It was quite a difference from just six hours earlier when he didn't want anything to do with the human he picked out last week.

Tomorrow, Jay is going to introduce the halter and see if he can get a start on brushing out those dang dreadlocks.  Tonight, though, I bet Copper sleeps hard - he learned a lot in a very short period of time.
Posted by GunDiva at 9:50 PM

So cool; Jay's gonna be a natural. Those two horses make quite a pair.
Mom

That is awesome! I'm glad things went so smoothly Copper's first day and I look forward to reading about the progression the two of you have with Skeeter and Copper.

I've got goosebumps just watching the video! How wonderful!