Last Friday I had my first lesson with Skeeter. I anticipated doing ground work and I was not disappointed. Skeeter had only been with Jessica for about four days at that point, so I knew she wouldn't be at the riding point.

Apparently, Skeeter was not a good house guest her first two days there and ran like a mad woman. Jessica is persistent, though, and wore her down. Skeeter was just not interested in that strange woman bossing her around and chose to leave. A lot. For two days, she ran around her pen like a fool.

Eventually she realize that all that running was hard work and that standing nicely for Jessica was a whole lot easier. Of course, I didn't know all of that before I arrived for my lesson. Skeeter wasn't hard to halter (ok, with the exception of the Julie Goodnight thing), but she wasn't as good at is as when I first taught her. I take full responsibility for that. I taught her how to lower her head and she practically haltered herself at the beginning, but as she got better at it, I fell into my old livery habits and just threw the halter on her without reminding her to lower her head.

Turns out, I let a lot of my livery habits creep into training Skeeter and Jessica has had to un-do them. For one, we never circled or longed horses. Nope. We caught 'em, saddled 'em, and rode 'em. Rarely picked up (or picked out) their hooves. If they could lead and stand tied and not throw a rider they were good.

I just have to say "wow" at what Jessica has been able to do with Skeeter. We talked about what she had worked with her on. You know, after the two days of running around like a fool. As she was talking, Jessica was demonstrating and I couldn't believe what the black mare was able to do. It might not seem like a lot, but it was huge.

Jessica showed me how to have Skeeter lower her head and put her nose in the halter. I'd done that, but in a slightly different manner, but let it slip as I mentioned earlier. Then she showed me how she kept Skeets out of her space and got her circling. Skeeter wasn't the world's best circler after just a couple of sessions, but she was so light. 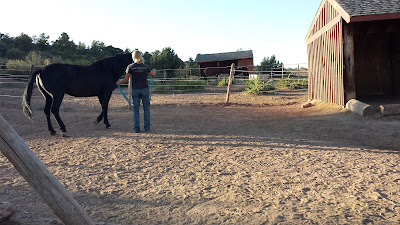 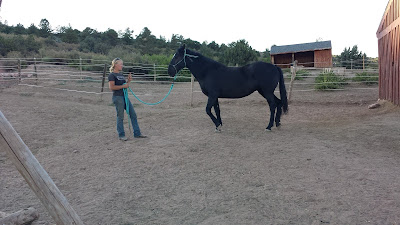 After Jessica showed me what they'd accomplished, she taught me how to do it. I have a lot of bad habits to break, but I'm so thrilled with how light and willing Skeeter is. I was happy with her before, but now I'm ecstatic. Jessica had to correct me a couple of times because I was confusing Skeeter, but by the end of the lesson I started to get it.

We talked about how much Skeeter hated fly spray. I can spray her all over with a bottle of water, but the smell of fly spray is what she takes offense to. We also talked about how she's not fond of having her feet handled. I mean, she was okay with the backs, as long as you could hold on until she settled down.

A couple of days ago a video popped up on Pony Peak's Facebook page of Skeeter not only standing to be sprayed with the stinkiest stuff around, but of politely having her back hooves picked up and set down. Jessica did say it was a "significant hurdle", which is polite trainer-talk for "dude, your mare's a bitch".

Jessica is also professional enough to tell me that Skeets isn't going to be a 30 day horse like I'd hoped. That's okay. At first I was thinking there's no way I can afford another 30 days, but I think with some careful not-spending, I can swing it. I don't want to push Copper out any more than he already has been pushed out either, so that's weighing on my mind as well.

Tomorrow is our next lesson and Jay's going with me. I want him to do some of this stuff with Skeeter so he can practice on Copper and hopefully it will decrease Jessica's work load once the big red horse arrives.
Posted by GunDiva at 8:12 PM 1 comment:

I haven't said anything about sending the horses to a trainer because I didn't want to jinx it. Jay had a trainer picked out for Copper, one who placed top ten in the Colorado Extreme Mustang Makeover (EMM) in May. The plans for Copper to go to that trainer fell through, so I was afraid to say anything about Skeeter going away until it actually happened.

I was super jealous of Jay's decision to send Copper to a trainer, and decided to re-allocate my "new gun" money to "Skeeter's Camp" money and talked to Jessica from Pony Peak Stangmanship. I met Jessica when she was a cast member on Horse Master a couple of years ago and have loved watching her work her 'stangs in the EMMs ever since. She is very zen-like in her approach to training and it shows in her horses.

Here's a video of her freestyle the year she won the Colorado EMM (2012). (You'll have to click the link, for some reason it wouldn't embed properly.)

We agreed she would take on Skeeter after she got back from the Fort Worth EMM (where she placed top ten), so on Monday I borrowed a friend's truck and trailer and hauled Skeets over. Mom came down to experience this milestone with us.

My friend's truck/goose-neck trailer combo was the biggest thing I've ever attempted. It was nerve-wracking because we had to go through miles of road construction, city traffic, and some dirt road driving.  I'm happy to say that I rocked that shit!

I had just a passing thought as to how Skeeter would do getting into a trailer that hauls cattle, but then it vanished. She started to follow me up into the trailer and the she smelled the cows. I'm not sure she's ever seen cows, much less been close enough to smell them. She backed off the trailer pretty quickly, but didn't go far, just far enough away that she could get a good sniff.

It took about ten minutes for her to decide that the trailer was an okay place, then she walked right in like she had been doing it forever. Meanwhile, though, Copper was losing his mind that I'd taken Skeeter from the pen.

I'd like to say that Skeeter behaved herself once I took off her halter and closed the partition, but that would be a lie. She and Copper started screaming back and forth and she started kicking the trailer. Mom and I loaded up her bale of hay, told her to knock it off, and headed to Jessica's.

It took almost an hour to get there, and Skeeter did really well until we got parked. Funny, when she's concentrating on staying on her feet in a big ole stock trailer, she's too busy to kick.

I continued to be nervous about getting her off the trailer once the big back gate opened, but she followed me down nicely. Her head got high and she got just a smidge charge-y, but not like when we were at Julie's. It was a vast improvement. 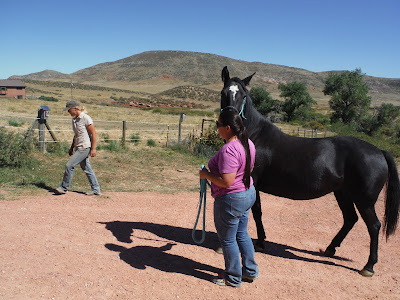 We got her settled into her temporary home and discussed the goals for the next 30 days. At the end of her 30 days, I'd like to have a walk/trot/canter with good stops and left and right turns. Very basic stuff that a green broke horse should be able to do. One of the best things about sending her to Jessica is that I'll get a weekly lesson with Skeeter so that I can learn what Jessica's doing and continue it at home. My first lesson is Friday and I'm so looking forward to it.

The trainer that Jay had asked to train Copper has been pretty incommunicado, so we asked Jessica if she could take on Copper, too. She agreed, so when Skeeter is done, we'll swap out with Copper. It means that they will be separated for about 60 days, which is perfect. It will be good for them to have to rely on themselves and a human for a couple of months.
Posted by GunDiva at 9:32 PM 1 comment: