The Worst Ride Ever

Sometimes, the guests with the most horse experience turn out to be a wrangler’s worst nightmare. Perhaps the worst ride I’ve ever taken out consisted of just two fourteen year-old girls, best friends. One of the girls lived in Colorado and the other had moved away the year before and had just returned for vacation. The father of the Colorado girl thought it would be fun for the girls to go out on a four-hour ride, since Visiting Girl was a competitive hunter/jumper and they both loved horses.


The ride started out okay; there wasn’t a whole heap of whimpering from either girl as we ascended the steep switchback to reach the trail. Visiting Girl asked once or twice if we could trot. I told her that there just weren’t a lot of places in the mountains that are safe to trot, but that we might be able to once we reached the meadow. Colorado Girl and Visiting Girl were chatting, getting caught up on their lives since Visiting Girl had moved away the year before. Their mutual gossip kept them entertained for the first hour of the ride.

At the end of hour two, going into hour three, we began to ascend the Olive Ridge route, which parallels some fairly steep drop-offs, but is a good, safe trail. I had taken literally hundreds of guests on that exact trail without a problem. In fact, the less horse experience my guests had, the more adventurous they seemed and the more they enjoyed the trail.

Colorado Girl was having a great time, enjoying the scenery and just being on top of a horse. Visiting Girl, however, the one with the most horse experience began to lose her mind. I don’t mean she was a little nervous, but that she went into a full-blown crying panic attack when she looked down off the side of the mountain. Now, the trail did run along the edge of a drop-off, but was nice and wide; there was no reason to worry that the horse would lose its footing and fall, but that’s exactly what Visiting Girl had envisioned.

There was no calming her down – she was absolutely, one hundred percent certain that her horse was going to fall off the side of the mountain and plunge her to her death.

As quickly as I could, I moved the ride off the trail and onto a nice, wide, graded fire access road, but there was still no calming her. Colorado Girl did her best, trying to talk Visiting Girl down, all to no avail. The return trip was spent assuring Visiting Girl that we were headed back to the livery and that there weren’t any places on the trail that she could fall off the mountain. We returned to the livery yard silent except for the sniffy, drippy tears of Visiting Girl and I swore I would never take out an arena rider again. Of course, I couldn’t get away with it, but that one ride distilled a deep distrust of “experienced” horse people who have never ridden outside an arena.
Posted by GunDiva at 1:26 PM 3 comments: Links to this post 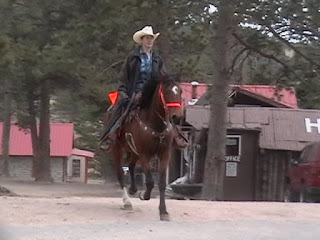 Estes is a sweet little Morgan/Quarter Horse mare. She stands 14.2 hands tall, has a white crescent between two amazingly soft eyes. When brushed out, her black mane and tail have lots of volume (that’s the nice way of saying out-of-control fluffy). It’s very difficult to tell her from her daughter, Meeker, who has a white star and three socks, rather than Estes’ two. Estes isn’t very affectionate, in fact, she’s rather stand-offish until she decides she likes you, at which time she becomes a regular snuggle bug. Well, maybe that’s not accurate. If she likes you, she might give you the time of day and not turn her back to you when you approach.


Estes is also a handful under saddle. Being a Morgan, she’s very forward motion oriented. And she’s quick. Truth be told, I was terrified of her and didn’t want to ride her. Once I was forced to ride her I learned two things very quickly: first, master the running mount or she’ll leave you behind; second, stay out of her mouth! She does not respond to mouth pressure well at all, which is what got her original wrangler in trouble.

As Estes and I got to know each other, besides falling absolutely, completely, unconditionally in love with her, I learned that she LOVED to stop traffic. There’s not a car, truck, or motorcycle that failed to stop for Estes when we were assigned traffic duty.

It didn’t matter which livery we were working with, there was always at least one road that the dude string needed to cross and Estes thrived at stopping traffic. All I would have to do was point her at a car and she did an excellent puffer fish imitation. I could feel her grow from 14.2 hands to 14.2 feet. There was not a car that was going to get past her. We’d step out into traffic and face the on-coming car. If the car didn’t begin to slow down, we’d play chicken with it. I’d put a little heel to her and hold up my right hand in the universal “stop” gesture as we would bear down on the car.

Usually, by that time the driver would be slowing to a stop. If the driver wasn’t slowing down enough, I’d pull Estes to a stop and plant her right in the driver’s way. She had an attitude about her that just said, “Try it, Buster!” I found out later that she would pull back her lips and snarl at the car.

If, even after her snarling and planting herself in the middle of the road, she didn’t bring the car to a complete stop, I’d inch her forward a touch and give a little tug on the reins. She’d go into her half-rearing War Horse prance, letting the car know that she wouldn’t think twice about planting those cute little double-ought front hooves of hers right smack-dab in the middle of their hood.