This morning we were woken up by a banging that we've never heard before.  I rolled out of bed to look out the window and saw Copper with his front leg in the rubber trough banging it around.  I climbed back in bed, looked at Jay and said, "this time it's your horse".  Usually it's Skeeter who is the trouble-maker, but Copper does have an odd sense of humor sometimes.  We eventually got out of bed and fed, but Copper was off his feed a bit.  He'd take a few bites, then go lay down and stretch out.

After a few moments, he'd get back up, paw the ground, eat a few bites, lay down and stretch out.  Lather, rinse, repeat.  I wasn't entirely sure he was colicking, but I knew he wasn't feeling well.  He had good gut sounds and wasn't kicking at his belly or even trying to roll, but he just wasn't right.

Just to be on the safe side, I wanted to give him some banamine, but couldn't find any.  What I thought was banamine was bute, so I called my neighbor to see if she had any.  Luckily, she did and was willing to give me some.

Copper was pretty good about letting me shoot it in his mouth and started feeling better pretty quickly, so I thought that if it was colic, we'd caught it pretty early. I headed into town to do some errands, and about half an hour before I was about to head home I got a text from L.E. saying that Copper was laying down, but she got him back up and moving.  That's when I decided it was time to consider a vet.

I called Mom, who called her (our) vet while I was driving home.  Because the ultimate plan is to have the horses up the hill, I hadn't gotten around to finding a new one.  Our vet doesn't practice this far north, so he gave me the name of the vet he'd done his internship with, so I called that vet when I got home.  Unfortunately, the second vet was unavailable, but was willing to refer me to a third vet.

Copper didn't look horrible when I got home, but he didn't look great either and I was wavering on whether or not to have a vet come out.  I watched him for a bit and when he started wanting to roll and kick, I decided to bite the bullet and call the third vet.

And the third vet referred me to a fourth vet, because he was off to another emergency, but told me that if the fourth vet couldn't make it out, he'd be willing to come by.  Holy cow, I was getting dizzy with the run-around.  The fourth vet was out of town, so back to the third vet.  He told me to start walking Copper and he'd be over as soon as he was done with his office emergency.

Of course, the minute I start walking Copper, he started looking better.  Jerk.  It did give us some bonding time, I suppose.  I don't handle him often, other than a few minutes here and there, so walking laps around the pen was good for both of us.

The vet wasn't exactly thrilled when he found out Copper was a mustang and (mostly) joking said that if he'd known that he wouldn't have taken the call.  You know, a mustang is just a horse.  Each horse has a different personality; some are angels, some are assholes.  Lucky for the vet, it was the angel, not the asshole, was the one who wasn't feeling well.

I wasn't sure how he'd do with being handled by someone he'd never met before, and I didn't know how he'd react to all the "stuff" that goes along with colic treatment.  He was unbelievably good.  It took some time to get the tube down his throat, but he was never mean or panicky, he just didn't get it.  Eventually, he figured out to swallow instead of cough and down the tube went.  After an initial step back or two, he stood still and let the vet pump in the water and mineral oil.  He breathed a sign of relief when the vet took the tube out, but was still pretty calm.  He took both IV injections like a pro, with just a flick of the ear.

It came time for the palpation exam and Copper said, "no thank you".  He was polite about it, but he said nope and meant it.  The vet said that he could feel some feces, but was certain that Copper would be passing it soon.  Because the vet was so uncomfortable being on the south end of Copper, and was still convinced that Copper was going to kick the tar out of him*, I didn't have him push the issue.  I told him that if he felt he didn't need to palpate, then it was no big deal to skip that part of the exam.

I couldn't be more proud of how Copper did with a stranger poking and prodding him.  He was so amazing, like a dead broke horse.  And then it was time to go back into the pen.  That was one giant NOPE.  It took us longer to convince him to go back in the pen than the whole of his treatment.  Jerk.

Jay and I just got back in from checking on him and he's looking a lot better.  He was never as sick as Estes, but I'm fairly certain I am suffering from colic PTSD thanks to her.  It's such a fine line with colic - can it be treated without the vet and resolve, or is the horse going to go south quickly?  Ugh.  I hate it.  I'm sure I made the right decision in calling the vet out and having him treat Copper, but it was a tough decision to make since he wasn't nearly as sick as Estes - there were no clear-cut signs of colic.

I don't work tomorrow, so I'll get to stay home and keep an eye on him to make sure he's out of the woods for real.

*I did tell the vet that Copper has never offered a kick; he's an evader, not a kicker.  If he doesn't want to do something, he'll just go away.  Sometimes going away involves rearing and spinning, but I was ready for that.

It's Been A Year!

I can't believe it's been a year since Skeets came home. My heart just stopped when the trailer door opened and there she stood.  It was for real - she was really mine and we were really going to start this journey.


From the minute she picked me out in the pens she was a cheater mustang.  In the pens, she allowed me to touch her all over, including her legs and belly.  I went into this partnership confident that I could handle whatever she threw at me.  She proved herself to be fairly level-headed even on the first day home when she finally calmed down enough to approach me to say, "hi, I remember you".

She even allowed me to take her tag off that day.  I know that she was busy taking everything in, and not totally focused on what I was doing, but she knew I wasn't going to hurt her and allowed me into her space long enough to cut it off. (I didn't even know until just a couple of months ago that you could un-thread the tags to get them off - I didn't look at them very carefully.) 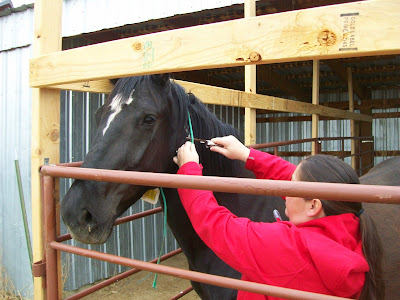 It hasn't always been smooth sailing, but it's been a lot easier than some people have with their wild ones.  We've had our big issues, but I can count them on one hand and still have fingers left over.

About a week after she was moved out of her gentling pen, she tried to pick up my camp chair and when I scolded her, she wheeled around and kicked out at me with both barrels.  It was a warning, and she had no intention of connecting, but it shook my confidence for a while.  She learned very quickly that she had to "face up" whenever I go into her pen.  We've not had an incidence since.

A few months later, just when I was starting to trust her again, she pawed at me while I was closing the gate and scraped the back of my calf.  I got after her pretty hard, and didn't turn my back on her for a very long time.  She wasn't being malicious in any way when she pawed at me; she wanted me to hurry up and she paws when she gets impatient.

And just two weeks ago, the bitch bit me (and Bill).  We got after her pretty hard, but I do have to take some responsibility for it because I'd let her manners go by the wayside.  Familiarity breeds complacency.  I got complacent and it bit me in the ass.  Okay, she bit me in the shin, not the ass, but you know what I mean.  We went back to groundwork and respecting space and you can believe that she'll not be allowed to turn her head toward anyone again.

Even with those three issues, we've had it pretty easy.  Easy enough that I probably should be full-on riding her, but I'm not really in a huge hurry.  Yes, I want to be on her riding, but I'm enjoying the easy pace we've got going.

I really wanted to get a pretty, one year "Gotcha" pictures.  Instead, thanks to Mother Nature and this very wet storm system, this is the one year picture I got: 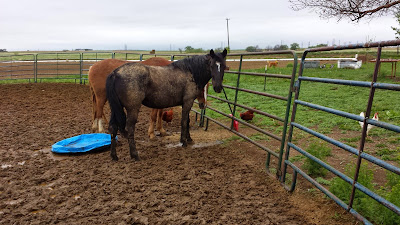