Last week, Jay and I attended a Justin Dunn demo where we were finally able to get our hands on one of his bitless bridles. We've seen Justin demo in the past, and it was good to get a refresher on how he does things. I find them remarkably similar to what Julie does with her horses - it's all about the ground work and controlling their feet. The difference is Justin calls his a "5-part series" and uses it to check in with his horses.

His 5-part series includes: back, left, right, ground-tie, come to me. Since we got to watch it over and over so many times that day, we were reasonably sure we'd be able to do it at home.

We waited a few days until we both had time to work together. We were reasonably successful. I've been struggling with Skeeter's circling work. After Julie's clinic back in May, I finally figured out how to get her to circle left, and we've been stuck there ever since.

Jay worked with Copper for a bit, but couldn't get him to circle either direction. Copper just keeps wanting to go backward and will not take a step forward. All we need is one step for him to figure it out, but he just doesn't get it.

I was working with Skeeter, still struggling with circling to the right, and getting frustrated.

Jay and I decided to switch horses. I mistakenly thought that since I could at least get Skeeter to circle left, I might be able convince Copper to go left. Yeah, I was wrong.

I had no success with Copper, but Jay did with Skeeter. Our Freaky Friday switch-a-roo worked wonders for Skeeter. I don't know what he did, or how, but now Miss Skeeter can do the entire series: back, left, right, ground-tie, come to me.


After we called it a day on trying to teach the 5-part series, it was time to fit Copper's new bridle to him. He has a huge head. Huge. But knew it, but we didn't really know it until we put that bridle on. 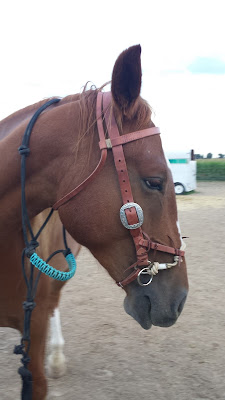 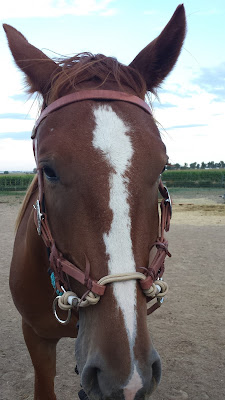 We adjusted it as big as we could, but we're still going to need to punch a few holes and order a new browband.  I think, once we get it adjusted properly, he's going to do very well in it. Copper's a sensitive boy who always wants to do right, so I think he'll do very well bitless.

And ... tomorrow's a big day for Jay and Copper! Copper's title inspection is scheduled for tomorrow evening - in two-three weeks Copper will be Jay's horse free and clear!
Posted by GunDiva at 8:22 PM 1 comment: Links to this post