...and I can't get the stench off my hands our out of my nose.

Yep, it's my old nemesis, Thrush.

Poor Estee has thrush in three of her little feetsies and Washoe the Wonder Idiot's got it in one of his feetsies.

I knew it was coming.  With all of the moisture, between the rain/snow/rain/snow, the pen hasn't had a chance to dry out.  Estee's club foot just begs for thrush to grow.  So, after a thorough cleaning, I sent Mom after the hoof knife.  Which has grown legs.

I finally decide I can take the knife to Estee and it's no where to be found.  Hopefully it will turn up before next weekend so I can clean up her feetsies.

Other than the discovery of thrush and the fact that Washoe the Wonder Idiot stepped on Mom, not once, but twice (he was kind enough to balance it out and step on each foot), it was a pretty good horse day.  Mom and I got to go out for the first time this season together.  Of course, there are no pictures of the two of us, so you'll just have to  trust me on this one.

It wasn't a terribly long ride, only about an hour, but it was beautiful.  In the thirteen years we've been riding in the forest, we've never heard the frogs singing in the meadow.  With all of the moisture we've had, the meadow has a small marshy area and the frogs have moved in.  I always feel so blessed to hear them singing - it's so rare - and to have them in the meadow is such a treat.

I may be cursing the moisture on behalf of Estee's feetsies, but I love that the froggies are happy and singing at the top of their lungs about it.
Posted by GunDiva at 10:12 PM 10 comments: Links to this post

I know several riders who use a FitBall or something similar to improve their balance during the winter when they can't ride.  I've done it in the past and was pleased with the results.

This year, Gymnastics Boy (my personal trainer), has had me doing a ton of work on a Bosu.  We started out with it platform down, so that I was standing on the squishy-ish blue ball portion.  He had me doing squats and basic balance work to keep my core working.  He then flipped it upside down, like this: 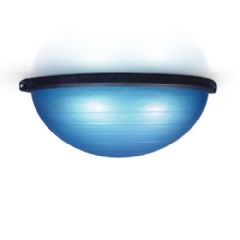 ...so that I was standing on the platform doing my squats and various other tortures that he came up with.

I have to tell you, while I was impressed with the FitBall's help with my balance, the Bosu has it beat hands-down.  I've never felt more secure riding.  I realized it on Sunday when Estes was wound up - it was a breeze to stay with her.  My confidence in my balance has skyrocketed, which directly translates to my confidence on Estes.

I can't recommend the Bosu strongly enough for all riders - not just the ones who feel like they need help with balance.  Heck, when I started working with the Bosu, I was a bit cocky because I *knew* that I had good balace from riding.  Boy, was I wrong.
Posted by GunDiva at 6:00 AM 5 comments: Links to this post

Do you see this? 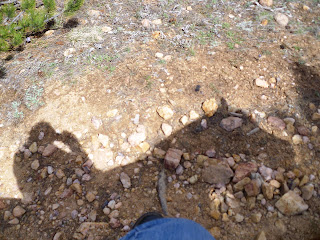 It's an actual shadow.  And what makes shadows?  THE SUN!  Hallelujah!  We got to ride in the sun.  Can't tell you how happy that makes me.

The downside of the sun? 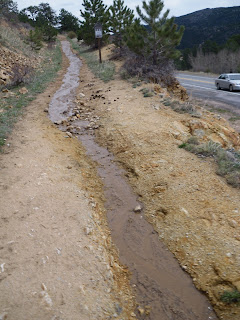 Run-off.  It's tearing up the trail.  This is the worst I've seen it on this particular portion of the trail.  The ground is absolutely saturated and there's nowhere for the water to go.

The pond is full and the frogs were singing - guess they're sick of winter, too. 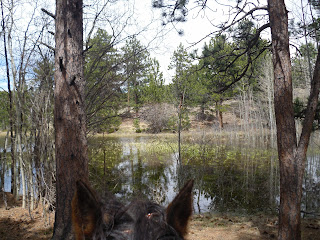 A Letter to Mother Nature

I know I asked for moisture after fire season came early, but enough already.  I'm tired of riding in the snow and cold.  It's almost the end of May, can you turn on the warm?  Pretty, pretty please?

I didn't even ride last weekend because of the cold and fog, and I love to ride.  Sometimes enough is enough.

Sincerely,
Tired of wearing eighty billion layers just to ride.
Posted by GunDiva at 12:50 PM 5 comments: Links to this post

I didn't get a chance to ride this weekend, which was an absolutely beautiful perfect-for-riding weekend.  Yes, I'm pouting about it.

I did get to ride last weekend, though, and had a great time.  What started out as a quick ride in cold, overcast weather turned out to be a beautiful, two hour ride.

The ground that wasn't snow covered was brown and dead looking, I'm hoping that once the snow melts off we'll start seeing greenery; I'm done with brown and white.  In our previous ride, I had dressed poorly and turned back because the snow was soaking throught my jeans and I was being a wuss.  For this ride, I decided to make the looooooooong trip up the ten stairs to where my duster was stored instead of taking the lazy way out and freezing my butt off.  The decision to dig out the duster was a smart one.  Wearing a duster while riding bareback is a lot like having a heater in a tent, especially since my duster covers all but my toes when I'm mounted.

Bill and I went off roading, enjoying it while we can, and busted through the crusty, wind-swept snow.  In the past, we had limited ourselves to the one-hour loop simply because our forays into the forest had been in inclement weather.  By the time we broke through the tree cover, the sun was out and we could actually see shadows - what a novel experience.

Based on the weather, we decided to continue on to the meadow.  Estes had a serious opinion about going one step farther than the one-hour loop.  This time her opinion did not include a rear.  No, this time she tried something new - speeding up in hopes that I wouldn't turn her away from the trail home.  But, you see, I know something she doesn't know.  She has to go where her nose is pointed and I had control of her nose.  I even told her, "go ahead Little Missy, speed up, we're still going where I want to go."

She tried the speed up into the turn thing at two different intersections before she gave up.  I won.  Twice.  Can't blame her for trying though, we have only done the one-hour loop since she's been home.

Bill and I rode around the brown meadow and headed toward Cody's trail (formerly known as the Trench Trail).  Knowing that the snow drifts often cover Cody's trail until mid-May, we turned away from it and cut up through the Aspen grove.  It was beautiful and by that time Estes had realized that we were out for a ride, not just a quick little jaunt around the top of the hill.

We did eventually have to turn back to home, at which time both Estes and Ranger found some energy.  Since Estes wanted to go back at a trot, I allowed her to move up into it, but didn't allow her to slow down when she wanted to.  There were a couple of times when I really had to work to keep her in the trot, but she wasn't going to get to choose when and where she wanted to trot - something she didn't really agree with, but was working too hard trotting up the hills to argue too much.  You know, a tired horse is a good horse.

I wish one of us had thought to take a camera with us, but we thought we'd be out a half hour or so in crappy weather, not two hours in beautiful weather.

Next time I'll remember a camera.
Posted by GunDiva at 7:52 PM 4 comments: Links to this post