While planting our garden, I decided to plant some carrots for the horses.  The carrots are doing lousy, by the way, but my carrot idea grew.  You see, I was telling my friend that I must be more horse crazy than I thought because I'd just planted food in my garden for my horses.  Specifically for my horses.  Yep, I'm definitely losing it.

But then I read an article that lettuce is okay for horse to have, too!  I'd already planted lettuce for me, but it wasn't going to be enough to share with the horses, so my brain made another big jump and said, "well, why don't you just plant a garden for the horses, in their pen, that they can graze on?"  And then the other half of my brain said, "That's a GREAT idea!".

So I dialed up Deejo, who provided me with the pallet collars for the human garden and told him I needed more because I was going to plant a garden for the horses.  Luckily, having the Bionic Cowgirl for a mother has rendered him immune to crazy horse ideas.  He didn't even sigh very heavily when I told him what I needed the collars for.

He turned up at the house with the most amazing planting boxes.  I thought the pallet collars were cool, but these were even better! 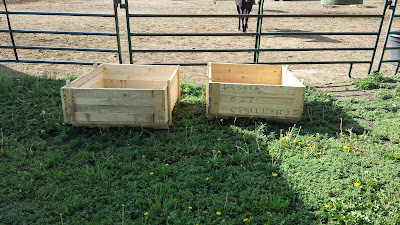 I didn't have nearly enough left over soil, so I headed to Home Depot to get more.  I picked up some sand for drainage and more soil and as I was standing there at the checkout line, there was a bag of grow anywhere grass seed!  In an instant, my whole plan changed from a lettuce bed to boxes of grass!  If I could get grass established, I wouldn't have to replant every year!  Trust me, I was feeling really brilliant at this point.

A couple of weekends ago, Jay and I had time to work on house projects and I was determined to get the horse garden in.  He set to work on making picnic benches and I started the garden.


It went pretty smoothly for the most part.  I got the boxes prepped and then had Jay help me lift them over the fence into the pen so I could start filling them.


I knew that the horses, Skeeter especially, wouldn't leave it alone, so I bought some chicken netting.  I really wanted the 1cm x 1 cm wire mesh, but couldn't find it anywhere at Home Depot - I was stuck with the chicken netting.

I used a million staples to attach the netting and chased the horses away from their garden two million times.


They finally lost interest in the garden and I breathed a sigh of relief.  But it was short-lived.  The next morning, I found they'd "helped" me by removing the netting.

I smoothed out the dirt, watered it, yelled at the horses, and then laughed at all of us.  They were having so much fun digging in their garden with their noses, I couldn't actually be mad at them for very long.  Skeeter had dirt up her nose and Copper had it in his hooves.  They were very happy with the sandbox I made for them to play in.

Each day for a week, I went out with the rake and smoothed out the soil.  I even watered it a couple of times, because I was still determined to get a damn garden for them.  Just as I was about to fall asleep one night, I thought to use my Google-fu to find the wire mesh I wanted.  Google assured me that Home Depot sold just what I was looking for, but I had been looking for it in the wrong department.

The next free day we had, Jay and I went to spend our Jax gift certificates at the farm and ranch store.  While we were there, Jay looked at me and said, "this is a farm store, I bet they have what you're looking for!"  By jove, he was right!

I was a happy, happy girl.

Last Saturday, while Jay was at work, my sister Nebalee came over to help me with the horse garden.  I could have done it alone, but it's more fun with help.  The horses had pushed a lot of the soil out of the boxes, so I picked up a couple more bags of soil and another bag of grass seed and we started again.


I was surprised to find that despite all of the horses' play time with the dirt, the seeds had sprouted!  There were tons of roots growing in the rearranged mounds of soil.  That grow anywhere stuff, really is grow anywhere!

It's not quite been a week since we put the wire mesh over the top, and we've had to add another piece of wood to help anchor the mesh, but the garden is still intact and (here's the best part!) grass is growing!!!!

It's Official! Skeeter's Mine!

Back in April, I received my title application.  I set up an appointment with a BLM volunteer (who I met at Mustang Days at the Rocky Mountain Horse Expo) to come inspect Skeeter and sign off on her paperwork.

Unfortunately, when the scheduled day arrived, the BLM volunteer was deathly sick, so we rescheduled.  The day of the inspection was cold and nasty; it had been raining for days and the temps hadn't been much above 40*.  The pen was a muddy, mucky mess and it wasn't terribly safe for a two-legged to go into it.  Feeding time was an exercise in core strength and balance just to make it the four feet from the gate to the hay storage.

Luckily, the volunteer said I didn't need to pull Skeeter, she just needed to take a look at her, make sure she was being well-cared for and ask a couple of questions.  It was very much like the home visit in January, only I had my title resting on this visit.

Skeeter came when called, allowed us to pet her all over through the fence then wandered off to eat.  Easy-peasy.  The volunteer signed the paperwork and I mailed it off on May 22, about one year and two weeks after I got Skeets. 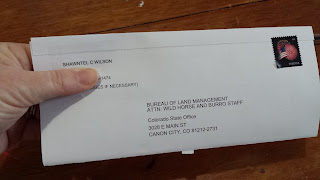 A couple of weeks later, June 5, I was crazy excited to get an envelope from the BLM, but when I opened it, it was the "unofficial" title with a letter my title would be arriving soon.  Basically, Skeeter was "unofficially" officially mine. 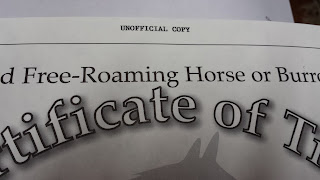 The unofficial copy was beautiful.  Printed in color on cardstock and delivered in a full-sized envelope with a letter of congratulations.  I couldn't wait until the official-official title came.  Which it did, nine days later, printed on cheap paper, folded up and crammed into a traditional envelope.  I was disappointed that the official title was much less impressive than the unofficial one, but it really doesn't matter, because it's going to get framed with her tag and go up on the wall. 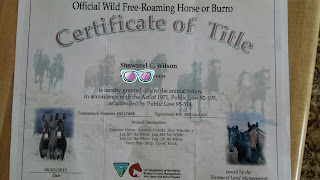 And once I get it up on the wall, I'm going to do the happy dance every time I see it, because Miss Skeeter Bang is MINE!