This was not an unintentional ride, I climbed aboard with every intention of riding.

We don't have a round pen and Skeets and I have never figured out the whole longing thing, so we're not doing this "right".  But, hell, every time I try to train "according to the rules", we don't make any progress.

We just started introducing neck reining from the ground a couple of weeks ago, and she mostly gets it.  With Bill's first ride last week, the transfer of information from the ground to her back started, plus she figured out she can go forward and carry weight.  Last week's first ride made my first ride go much more smoothly.

Skeeter Had Her First Ride

I haven't said much about it, because I wanted to have the video ready and just haven't had time to mess with it.  Finally, I was able to sit down long enough to put it together.

Last week, Mom and Bill were down again to work with the horses.  I was supposed to meet them at the house after a funeral, but the funeral/graveside service ran long and they had more time to play than I did.  While I was on my way home from the cemetery, Bill slung a leg over Skeets and she moved off.  His options were to fall or slide on over, so he slid on.  Since he hadn't planned on an actual ride, he just had the halter and lead rope on, but didn't have the lead rope tied around as reins.

Skeeter wasn't so sure what to do, so she tried backing out from under him.  She didn't panic, just tried backing up.  After a few minutes, Bill had Mom tie the lead rope around and they started working on getting her feet moving.

It was just a few minutes, but she moved with purpose, under direction, so that counts as a ride.  God willing, I'll get my first ride on her this week.
Posted by GunDiva at 11:45 AM 6 comments: Links to this post

Mom and Bill have been so good about helping us with the horses.  Our schedules pretty much suck right now and focused training time is limited, so when they had a free day, we took them up on it.  Eventually, they'll get a blog written up on the day.  Until then, here are a couple of videos that I put together of the videos they took.  (How's that for confusing?)


Today, Jay and I were able to work with our babies for a bit.  Copper worked on leading instead of dragging and Skeeter worked on wearing the saddle some more.  She was kind of scooting around when I first threw the saddle and it was all jacked up, so we had to strip the saddle and start all over again.  She stood much nicer the second time.  We don't have a hitch rack, so she has to ground tie while I'm saddling her and ground tying is not her strong suit.

She asked to go out of the pen, so we went for a walkabout, which caused Copper to lose his mind a bit.  She's better out of the pen for me, but not perfect.  I can't tell if she's crowding me because she's being a pushy bitch or because she's looking for reassurance.  Next time we're out of the pen, I'll have someone video tape it.
Posted by GunDiva at 7:16 PM 2 comments: Links to this post

On September 6th, Copper graduated out of the gentling pen.  It went beautifully.  Jay worked with him in the pen for a bit while I worked with Skeeter, then we just opened the gate and watched to see what would happen.

It was absolutely anti-climactic.  Skeeter took a few minutes to realize that Copper was really out of the pen and then they spent some time running about.  All in all, it was a pretty boring release day.  In fact, when my girls came to visit, Skeets and Copper acted like they'd been together forever. 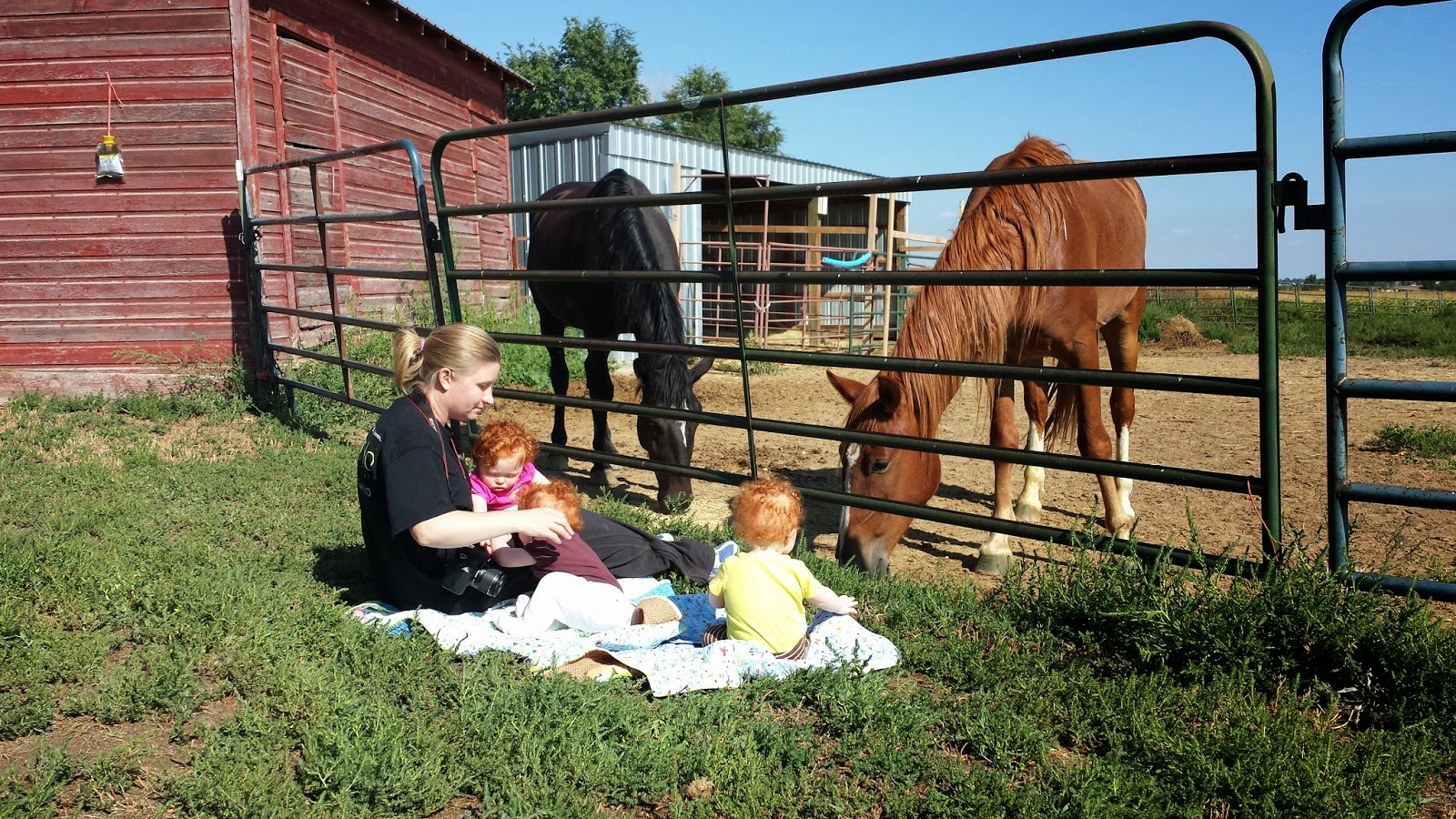 Posted by GunDiva at 10:02 PM 4 comments: Links to this post

I know it doesn't seem like that big a deal to some people, but it's huge to me.

From her back is a totally different story.  I know that good ground manners translate to riding.  I know that, but it was still a huge deal to climb up on her back today.  I had to trust that she trusted both Bill and me enough to let me climb up on her.  I had to trust that I've instilled enough ground manners that if Bill told her to whoa and stand she would do it.  And I desperately don't want to screw her up and have bigger problems in the future.

It took about ten minutes for me to actually make it onto the back of my horse, but it felt much longer.  It seemed like I did the pressure/release thing forever before finally sliding up.  We started with leaning over her, which Bill has done lots of.  It's not a big deal.  Then I kicked her back, hip, flank and leaned some weight on her.  When she shifted, though, I removed all the pressure by standing back up on my "mounting block".  We did this several times until she didn't care that I had one leg dangling over the other side and she was bearing more than 50% of my weight (not that she cared a lot to begin with, but I had to be sure she'd stand stock still).  She moved off a little bit when she realized I wasn't going to relieve the pressure by stepping off, but didn't bolt.  She took a step or two and then froze.  She's young yet and has never had to balance an extra chunk of weight on her back.  She eventually figured to tighten her stomach to help balance the weight and was able to move a step or two before I slid off.

All of the time Bill has spent playing Dead Indian with her has paid off.  She doesn't care about someone laying across her back and sliding down.  My knees are far too old and abused to be just popping down off a horse.  I need as soft a landing on my feet, and therefore my knees, as possible.

Bill scrambled up on her after I got off and she was just as good.  I lead her a step or two and we called it good.  I removed the halter and just let her be.  As we wandered over to fill the water, I realized I had a halter in my hands and I could just sneak into Copper's pen and quick put it on him for a minute, so I did.

Copper did really, really well. He's still figuring out the leading thing, and asks that I remember to lead him properly instead of dragging him by his face.  He very much prefers to be lead with the person just forward of his shoulder (you know, where you belong) instead of out in front of him.

After Copper got "worked" for all of about three minutes, it was back to Miss Skeeter Bang.  On went the halter and back to the mounting block.  She really balked at it and didn't want to play, so I changed the rules and had Bill lead her up so I could mount from the off-side.  I don't think it occurred to her that I would change the rules and she'd have to learn from both sides.  Ha!

She didn't make it easy on herself by parking out a bit from the block.  I was able to get my leg over, but then had to leap from the block onto her back.  In the video, you can tell that she wasn't exactly thrilled with my weight landing on her back.  You can almost hear her go "ooof".  I started sliding and grabbed onto her with my left leg to try to get centered again. In the video, that's when she started turning into Bill.  It took me a second to realize I was causing the turn by grabbing on with my leg (good for her, moving away from pressure) and as soon as I relaxed, she straightened out and relaxed.

When Bill hopped up on her, she was pretty much over the whole day and pranced a bit.  I made her stand and relax before he got down and we called it a day.

I actually am just making it up as we go at this point.  I know there are great training videos on how to start horses, but I'm just kind of letting her (and Mom and Bill) tell me what she's ready for next.  It's worked so far, let's hope it continues to work.

Posted by GunDiva at 8:35 PM 8 comments: Links to this post