It's been almost a month since Estes colicked ... she's still pretty weak and not putting on any weight.  She's still pooping sand and uncomfortable off and on during the day.

She's been on beet pulp all summer, Mom has added senior feed to the aminos that she was already feeding and the horses are now on free-feed hay.  I'm taking Estes out for short rides only once a week (when I'm up there).  The vet told us it could take a month for all of the sand to clear, but I think it's going to take a little longer.  The psyllium seems to make her more comfortable, but she doesn't pass much sand with it.  The sand moves better when she's not on the psyllium, but she's more uncomfortable.

So...I know she was on death's door, but does anyone have any idea how long it will take her to start feeling more like herself?  Any suggestions?
Posted by GunDiva at 10:59 PM 7 comments: Links to this post

Ride 1
Queen Estes still isn't feeling the best, but after a couple of weeks of lounging around the pen, she had to get out.  She was not at all up to doing the ride we had planned, but I had to take her out for a short ride.  I decided I'd just take her around the Ski Road loop, about two miles, at a walk to just stretch her legs out.  Maybe walk off some of the soreness from standing around eating for two weeks.

It wasn't very long, maybe only a quarter of mile, and she was really building a good head of steam before I started to bring her back down to a walk.  After being stagnant for so long, the last thing I wanted to do was lame her up.

The ride was fabulous, even if it only lasted fifteen minutes.

Ride 2
I invited The Little Bastard El Poquito Diablo and his girlfriend up for a ride.  I figure it's only fair that I get to torture him, after months of him kicking my ass in the gym.  I was determined to make him hurt, I'll admit it.  I stuck him up on a big ole horse, Gem, and planned to take him on a couple of tough trails.  The Bionic Cowgirl actually expressed concern that I might be leading El Poquito Diablo and his girlfriend through some trails that weren't appropriate for beginner riders.  She was so right.  I counted on the fact that if El Poquito Diablo could compete as a National Gymnast for most of his life, he could stay on top of a horse for two hours. 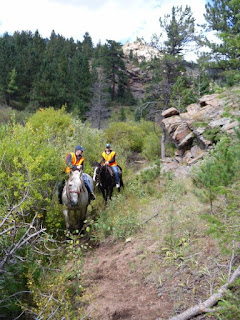 Coming across the Willow Tree Trail 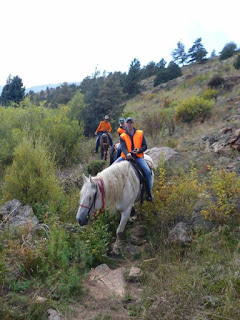 Gem hasn't lost him yet. 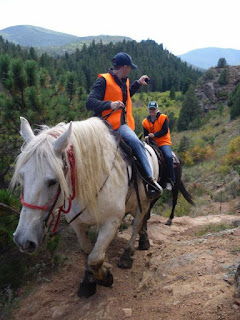 Top of the trail 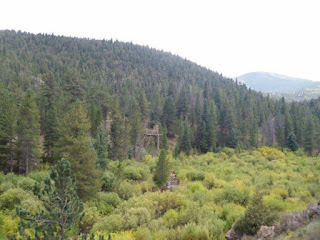 Looking back over the beaver ponds/dams 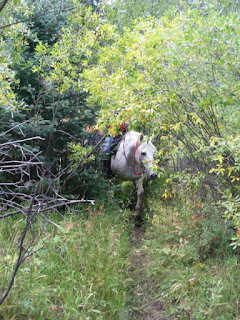 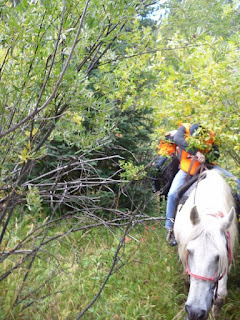 Duck, El Poquito Diablo!
It was nice of Mom to worry, but he managed to follow the first rule of horseback riding: Keep the horse between you and the ground.  Bill, however, failed that rule not once, but twice.  Yep, fell clean off of his scary, fire breathing mustang.
Ride 3
As we rode back into the yard, we could see Mom grooming her two grays.  I'd told her that I'd go out with her after I got back from the big ride.  We hung out and chatted a bit while I waited for my ibuprofen to kick in, bid El Poquito Diablo and his girlfriend goodbye and then headed out for our ride.
My knees were on fire, so we settled on a short ride.  One just long enough to get them limbered up and out of the pen for a while.  Washoe behaved himself beautifully - mostly because I kept him moving along quickly enough that he didn't have time to even think about eating or being a gooberhead.
By the time Mom and I went out, I was pretty much camera'd out, so I only managed to snag one good one of her. 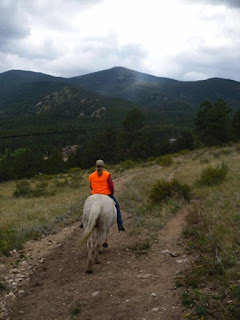 We got back just as it started spitting rain.  Talk about perfect timing!

Three rides in one day, on three different horses, yeah, my knees are telling me about it.  But my heart is happy.

For Estes' first ride post-colic, we just went for a short jaunt up the hill with the Bionic Cowgirl, Autobot and Kyzzer.  While I was looking forward to a ride, it was probably best that we went for a meander.  Autobot rode the fire-breathing mustang, who didn't look nearly as embarrassed to haul her around as he is hauling Beel around.

Next week it'll be back to riding as usual.  No more meandering.  Next week, we ride!
Posted by GunDiva at 10:19 PM 3 comments: Links to this post

This time last week, I was calling my boss to let her know I wasn't going to be in to work, because Her Highness had colicked.

One week ago, I was getting set to get up with Estes every two hours to check on her.  Despite being tubed and the banamine she'd been given, she wasn't showing much improvement.  No pee.  No poop.  No drinking.  Things were looking bad.

One week ago, I was steeling myself to make the decision that no animal owner wants to make.

Tomorrow will be one week since she was given a reprieve.  The short-acting opiates the vet gave her controlled her pain enough for the muscles to relax and for things to start moving again.

Tomorrow, we celebrate by going for a ride.

Yep, I think that's the perfect celebration.
Posted by GunDiva at 7:59 PM 6 comments: Links to this post