First Ride of the Year

The snow finally melted for a couple of days and both Estes and I needed to move.  But the mud was gross enough that I didn't want to try to run in it - I was afraid I would have fallen right underneath her. 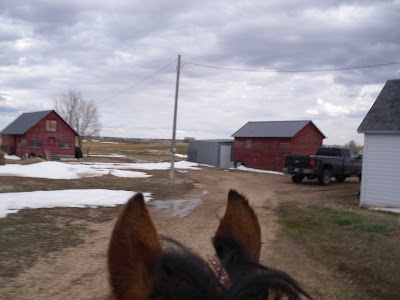 It was a very short first ride, but it felt really good.  We've got snow coming in again tomorrow, so it'll be a few days before we can venture out of the pen.

We've had some weird-ass weather here lately.  The weathermen have been crying wolf almost every weekend.  Seriously, we've been on Winter Weather Advisory more this month than all winter long.  This morning, without any weathermen telling us the Blizzard of the Century was coming, we woke up to snow.  Beautiful, heavy, wet spring snow.

This is the kind of snow we've been expecting with each Advisory.  This time, no warning, just a mention that we had a slight chance of snow.  We've had eight inches throughout the day and it's still snowing.

Yesterday, just on the off chance that we'd get more than just a smidge of snow, I threw an entire bale for Her Highness.  I found that if I put the bale in her stall, she would stand at the door and eat off of it.  She still won't go into the stall, but she'll eat her hay from the doorway.  Crazy girl.

There were no tracks in the pen, so she had been standing by her house, just hanging out enjoying the snow.  It wasn't cold and blowing, just gently falling and she looked so peaceful.

Her Highness has decided she *likes* going for runs and meets me at the gate with a hopeful look every time I drive in.  Or maybe she just thinks she's going to get some oats.

I can't really chalk it up to the oats, because I just started her on them.  So it is definitely that she likes running.  I now have to lock the gate when I go into her pen, because she thinks once I'm there it's time to go.  The crazy thing is that we've only been out running three times.

Late this morning, I went over, fed her, scooped her poop and told her I'd be back for our run.  She looked at me like I was betraying her.  It didn't matter that I spent an hour in her pen, cleaning up after her and loving on her - I was leaving without taking her for her run.  You think a dog can make you feel guilty?  Try those big beautiful eyes.


She looked at me like I was lying to her when I said I'd be back later to take her running.  I didn't want to take her right after she'd finished eating, so I went home and took a nap.

When I got back, I grabbed her halter and curry comb.  I threw her halter on the ground in front of her so I could work on her nasty shedding with the curry and that little brat tried to halter herself.  She pushed and pushed the halter around with her nose until she had her nose in the nose band.  She wouldn't leave it alone until I haltered her.  Once I haltered her, she stood ground tied while I finished currying her.  It's like she didn't believe that we were actually going running until she was "dressed".  I have curried her recently without her halter on and then left, so maybe in her little mind, the halter was sealing the deal that we really were going to leave the pen.

She's so good when we go out on our "runs", which currently are intervals that are more walking than running.  She stays right at my shoulder and has quit swerving into me and lets me set the pace.  I was in a flat-out run on a couple of our intervals and she just trotted along happily, later in our program, when I was tired, I slowed down to a job and she just followed suit.

I'm trying to figure out how to get pics of us running together, but it's all I can do to breathe when we're running - I'm not sure I can breathe, run, AND take a picture.

We are having a good time, though, and I have a much harder time bailing on her, so this running thing might actually take this time around.
Posted by GunDiva at 7:15 PM 7 comments:

When I told Jay that I was going to start Ease Into 5K again and do it with Her Highness, he looked at me like I was crazy and informed me I couldn't just run with a horse like a dog.

So yesterday morning, I slipped on my sweats and shoes, put Her Highness in her halter and headed out.  And you know what?  It was so much easier to take Estes for a run than ANY of the dogs I've ever taken out for a walk.

She kept right at my shoulder the whole time.  Occasionally, I had to push her away from my shoulder because she would drift into me, but she really was easier to run with than any dog I've ever dealt with.

She also pushed me a bit on the run portion of the intervals.  Not that she dragged me or put any pressure at all on the lead rope; I just had to move my feet faster than a slow jog to keep up with her easy trot.  That's good for me, because I can do the world's slowest jog - barely faster than a quick walk.

Anyway, it was so much fun that I'm actually looking forward to doing it again tomorrow, and I can't remember the last time (if ever) I've said that about running.
Posted by GunDiva at 10:01 PM 4 comments: