Last Ride of the Year

I'm really behind on some rides for this year. I think I've even managed to skip over my birthday ride - and that was in July! Maybe getting those posts up will keep me busy this winter when I get to missing my girl.

Today was cold and windy, but the horses are going to winter pasture next week, so today was the only chance I had to ride before Her Highness went on vacation. Mom and Bill's horses might be back in a month or two, but Her Highness will go down to fat pasture in January. She needs it. Even though she's been maintaining her weight for the most part, fat pasture is so good for her, plus it's at a lower elevation. Winters at altitude are kind of tough on the old girl. Down closer to 5,000 feet will be much easier, as it's typically ten to twenty degrees warmer down there, not to mention much less windy.

At her age, I'm getting worried about sending her out to pasture, honestly. I know Ida takes amazing care of her and will keep an eye on her, but I still worry that she won't make it through the winter. That sounds terrible, but she's 25-ish and the fact is, she's geriatric. I know that by sending her down to fat pasture, she'll be much more comfortable, will gain some weight, and Ida will treat her well.

I had hoped for some good weather, but it didn't look like it was going to happen, so we loaded up anyway. Ashinator was c-r-a-n-k-y that I woke her up from her nap to take Ranger out. I actually had to pull rank and tell her she was going to do it, I wasn't asking. Want to know how to piss off a teenager in about 1.5 seconds? Wake them up from a nap and tell them they are going to do something.

Oh, she put on a good show of being pissed off. Well, it wasn't really a show, because she was super pissed and stomped around the lodge like only a nineteen year-old girl can. Beel was actually worried that Ranger was going to dump her because Ranger is really sensitive to moods. Beel was fairly certain that Ranger wasn't going to put up with a certain cranky someone's shit.

Boy, was Beel wrong. Ashinator had never caught Ranger before, and if he don't want caught, it ain't happening. However, Ashinator stomped through the pen with the lead rope in hand and I'll be darned. He put up a token resistance. And I mean token. To just stand there and get caught is against his nature, so he had to shuffle his feet a little bit and go down to the stream to get a drink of water, but he pretty much haltered himself for Ash.

She muttered and cussed me out the whole time, but Ranger just followed along and agreed with her. While she was catching Ranger, Estes kept trying to go to her. I had walked up and haltered Estes and was watching Ash to see if she needed any help with Ranger, but I had to hold Estes back. What is it about horses that just want to "heal" cranky girls? All that negative energy pouring out of Ash and Ranger and Estes couldn't get close enough. WTH?

You know that old adage, "The outside of a horse is good for the inside of a man"? It's so true.


Because it was so cold and windy, we only rode around the Ski Road loop, but it was plenty to get Estes warmed up and moving well and enough for Ashinator to shed her cranky pants.

And since it's our last ride of the year, here's an almost-good picture of me with Her Highness.

Poor Bill didn't get left behind, thought it might look like it since he's not on his horse. Here's photographic proof we didn't leave him...

We went for a ride today.

For a few strides anyway, then I picked up the reins.  I'm always afraid that she's going to trip over them when I've got them just laying on her neck.

It was a pretty darn good day.

A couple of weekends ago, Rachel, Mr. Daddy, and Itty Bit came for a visit.  We tried to do something for everyone; Swetsville Zoo for Itty Bit, shooting for Mr. Daddy (post on that coming soon, I promise), and riding for Rachel.

The last time Rachel came riding with us, it was kind of an adventure.  We put her on Baggins from the livery and he was a head-tossing fool.  It wasn't a lot of fun until Momma P switched horses with her, once Rachel was up on Timber, she started to have fun.  Especially when we crossed the water - the girl couldn't stop giggling. 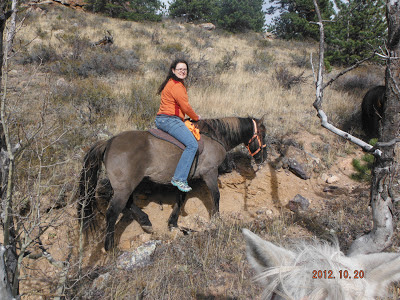 However, it all turned out beautifully.  Not only did she rock the ride, but she's a wildlife magnet!  I haven't seen much in the way of wildlife this summer (other than the moose at the beginning of the season).


There was some initial confusion as to what we were looking at.  We saw their butts first and thought, "mulies!".  Then we saw the chest on one and thought, "elk?"  It wasn't until one picked its head up to look at us that we said, "SHEEP!"

Rach did mention to me later that Ranger might still have some sore kidneys from her knees digging in, anticipating that he'd jump away from the sheep.  If she was worried, she sure didn't show it. 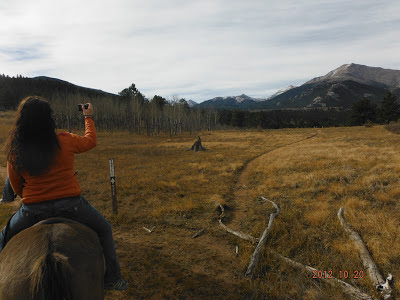 Rachel wasn't just a sheep magnet, she also managed to scare up some deer for us, too.