Mom and Bill came down to help us with the horses again on an absolutely beautiful day.  I had to work (as usual), but Jay was off, so they started with Copper.

Since Copper *hates* being left in the pen when we take Skeeter out, we thought we'd see how he did if we took him out and left her in the pen.  He was a rock star.  Skeeter couldn't have cared less that he was out and about, and Copper was happy to play along with Jay.  They went for a walk and slalomed between the fence posts, but Copper drew the line at crossing the ditch. 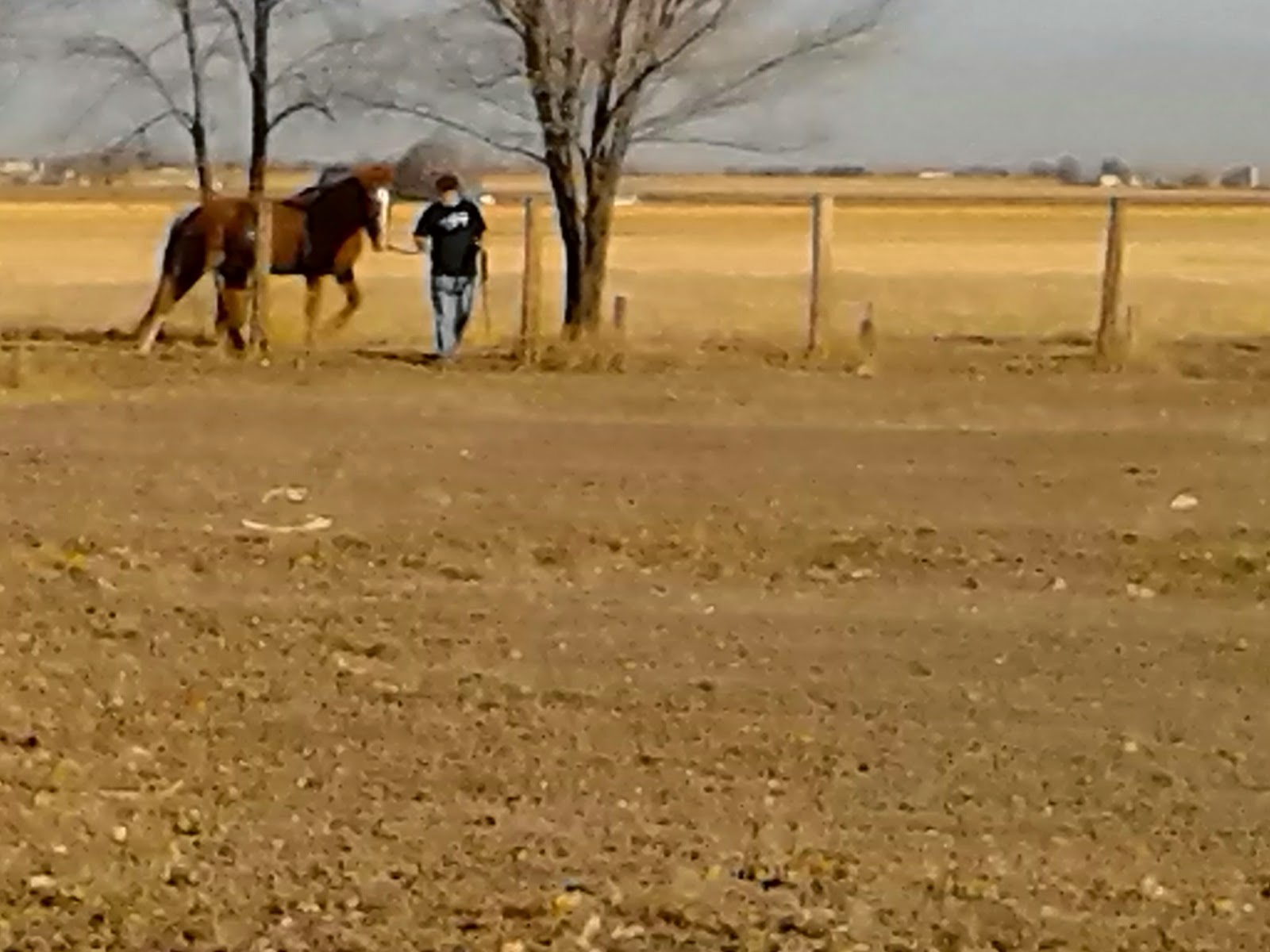 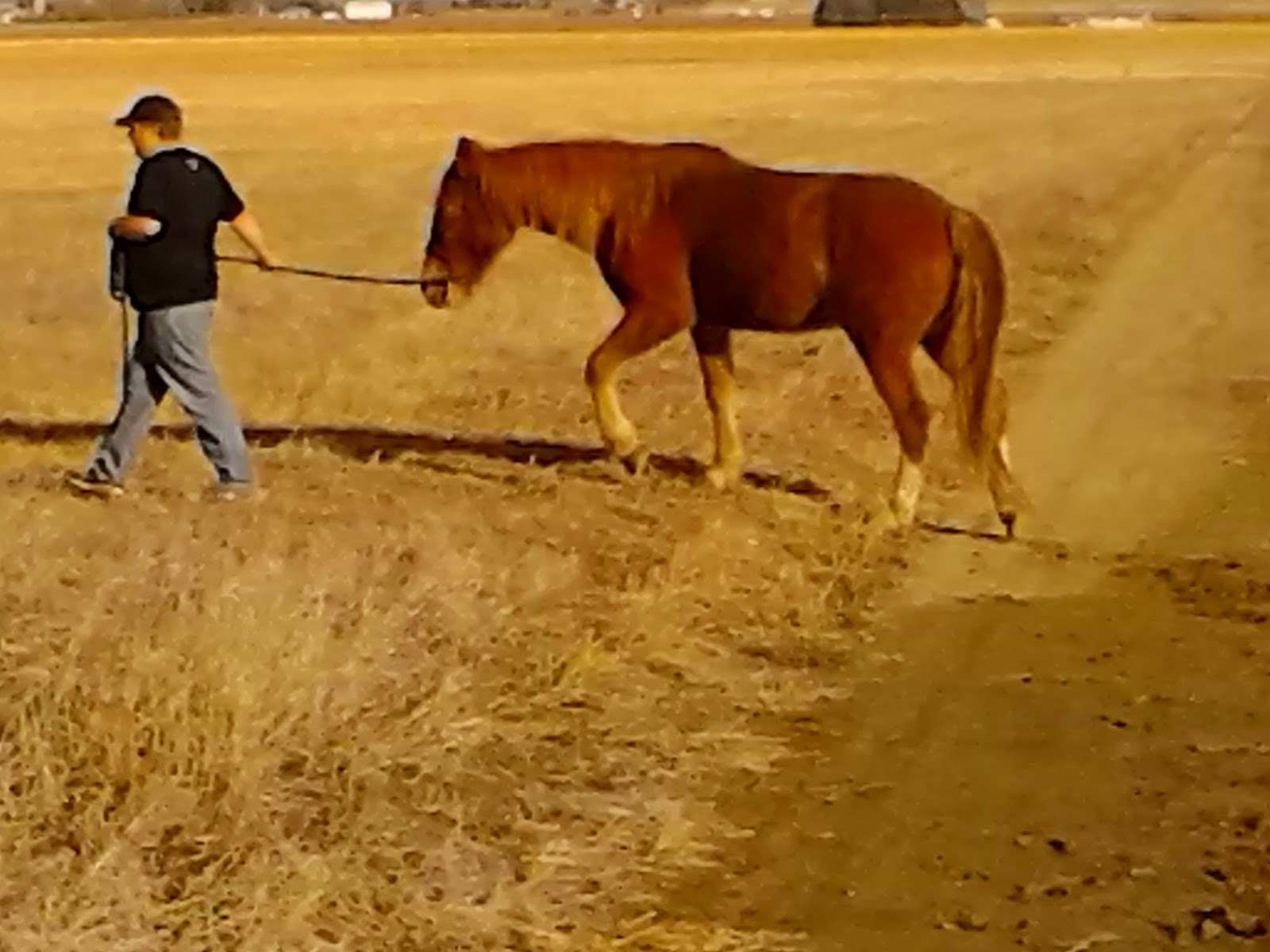 Copper does not like people standing above him.  Does not.  We tried getting him to line up next to our "mounting block", which is just a turned upside-down feed tub and he was having none of it, so we back off a bit. Instead of taking him to the mounting block, we turned a bucket upside-down and took it to him.  Jay and Mom spend a good deal of time just placing the bucket next to him, stepping up, leaning over, and getting down just to repeat the whole process on the other side.

It was good for Copper to understand that just because he doesn't like the black feed tub (which is a lie, he plays with it all the time) doesn't mean he's going to get out of work.


Posted by GunDiva at 8:50 PM 2 comments: Links to this post

While I was at SHOT Show in January, Mez and I ran across a great product called Nite Beams.  Though the product is primarily aimed at joggers, I immediately thought of my endurance friends.  Or really, anyone who rides at night.

Nite Beams are LED lights that can be seen up to 1/4 mile in each direction.  If you have a dark horse like I do, or like to ride at night (*cough* *cough* crazy endurance peeps), this could be a great product.  We spoke to the owner for quite a while - he's passionate about safety of people and animals.  When I mentioned that I thought it would be a great horse product, he said that he had made some halters in the past, but didn't really have a market for them.  (P.S. he still has a few in stock, you just have to ask nicely for them - I think I'll order one just to try it out.)

Here's a quick video of his products:


There area multitude of ways you can use the products.  I'm planning on ordering two sets of the arm bands an putting them around Skeeter's legs, just above the hoof, so that she can be seen from any direction.  Bill suggested using the dog leashes as reins.  As long as you're comfortable using split reins, I could see that working.  I also just saw on FB horses that had LED strips hanging from their tails.

For you endurance peeps who use glow-sticks, couldn't you just attach these to your breast collars?

The lights will last for thousands of hours, but the batteries will eventually need to be replaced, and that's okay.  I'm seeing this as a one-time investment (unless Skeeter destroys them, which is a real possibility).

Posted by GunDiva at 7:00 AM No comments: Links to this post

A few days of horse stuff, so now it's time for the cutest ever kitten break.

RapDom tactical gear gives away beer koozies every year at SHOT Show, but they're not your ordinary beer koozies.  Nope, they're in the shape of plate carriers (or if you're old school, flack jackets).  We've been wondering if we could get Abby into one.  Jay and I weren't going to attempt it, because neither of us wanted to be shredded while attempting to put it on her.

Ashinator came over this morning and was willing to hold the shitten while I dressed her.  I don't think too much blood was shed, or skin lost, and we managed to get the dang thing on her.

Abby was not impressed.


But we got a good case of the giggles :)
Posted by GunDiva at 7:00 AM No comments: Links to this post

Following the convention of all horses' birthdays being January 1st, Skeeter and Copper both turned 5.  They're probably both a bit younger than that, but since they were wild born, we have no idea of their actual birthdays so using the conventional birthday works for us.

They weren't too excited about their big day, but they graciously accepted their birthday carrots anyway. 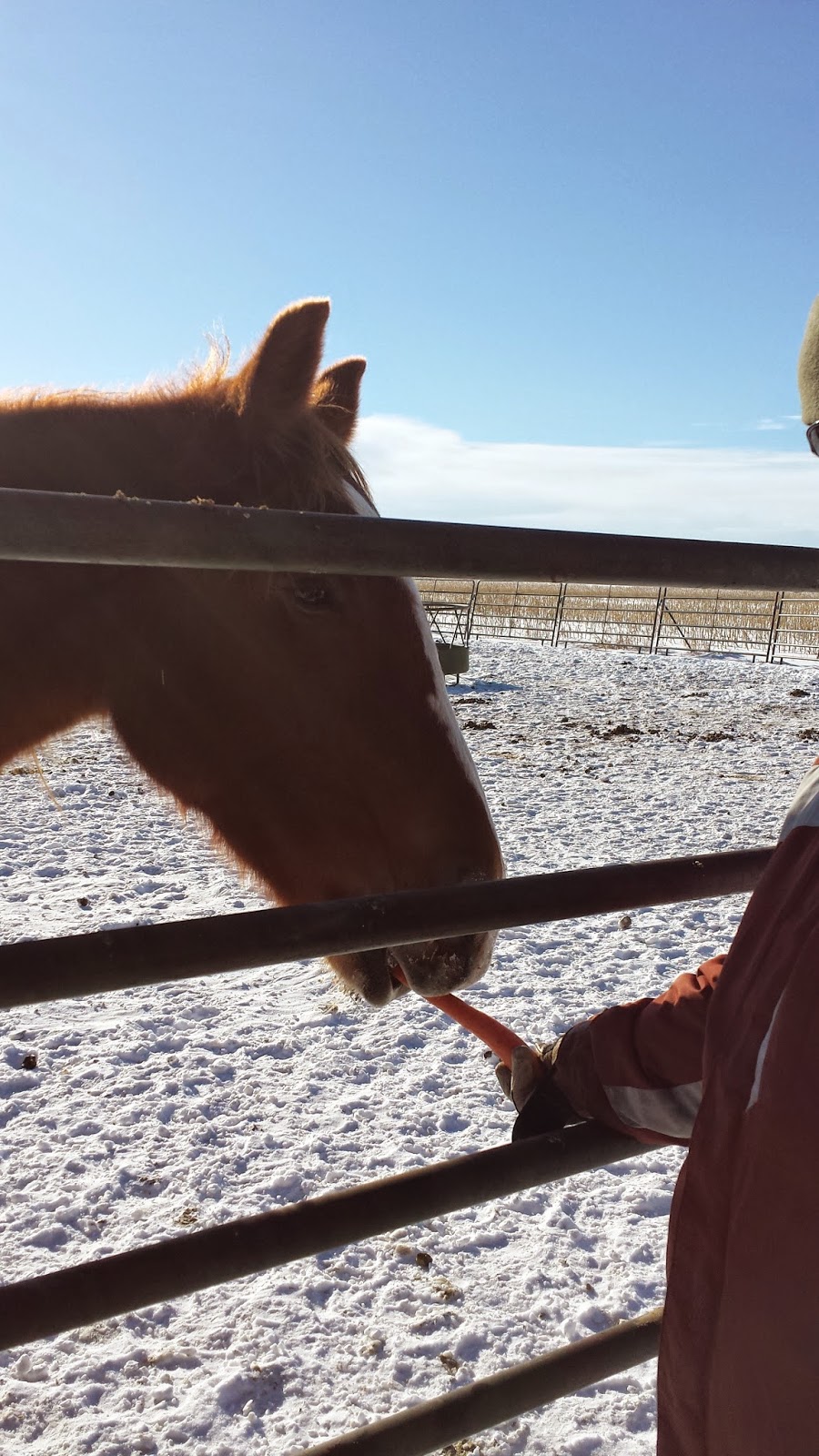 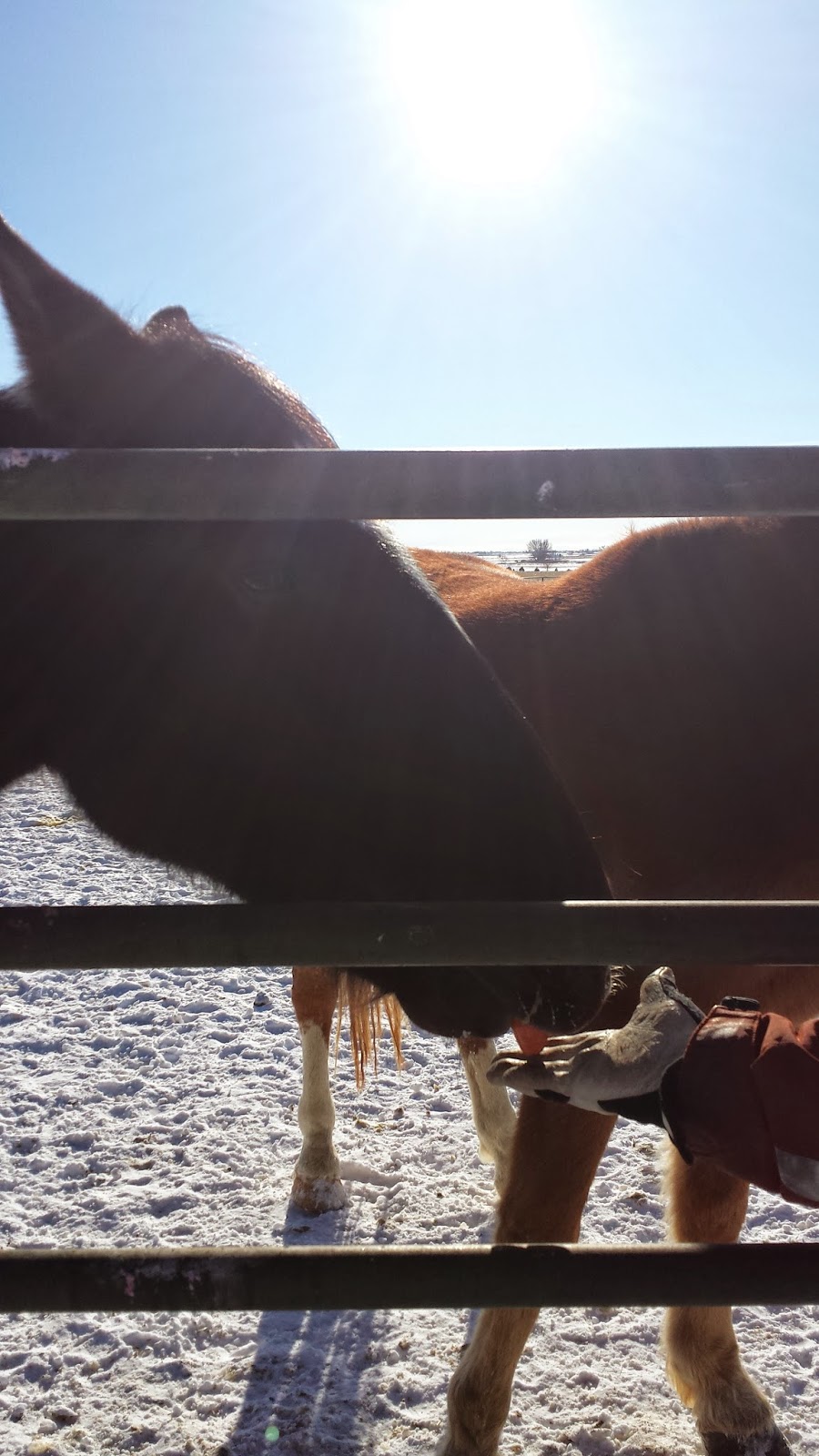 Posted by GunDiva at 12:00 PM No comments: Links to this post

Being December, we knew the nice weather was just stopping by for a visit and wouldn't last, but we did not anticipate being unable to use our gates to get into the pen.

The combination of humidity and cold-cold conspired against us and the thumb latches on our gate chains froze.  I'm not exaggerating when I said we couldn't get them to budge.

We tried warming the latches with a lighter, but that didn't work either. 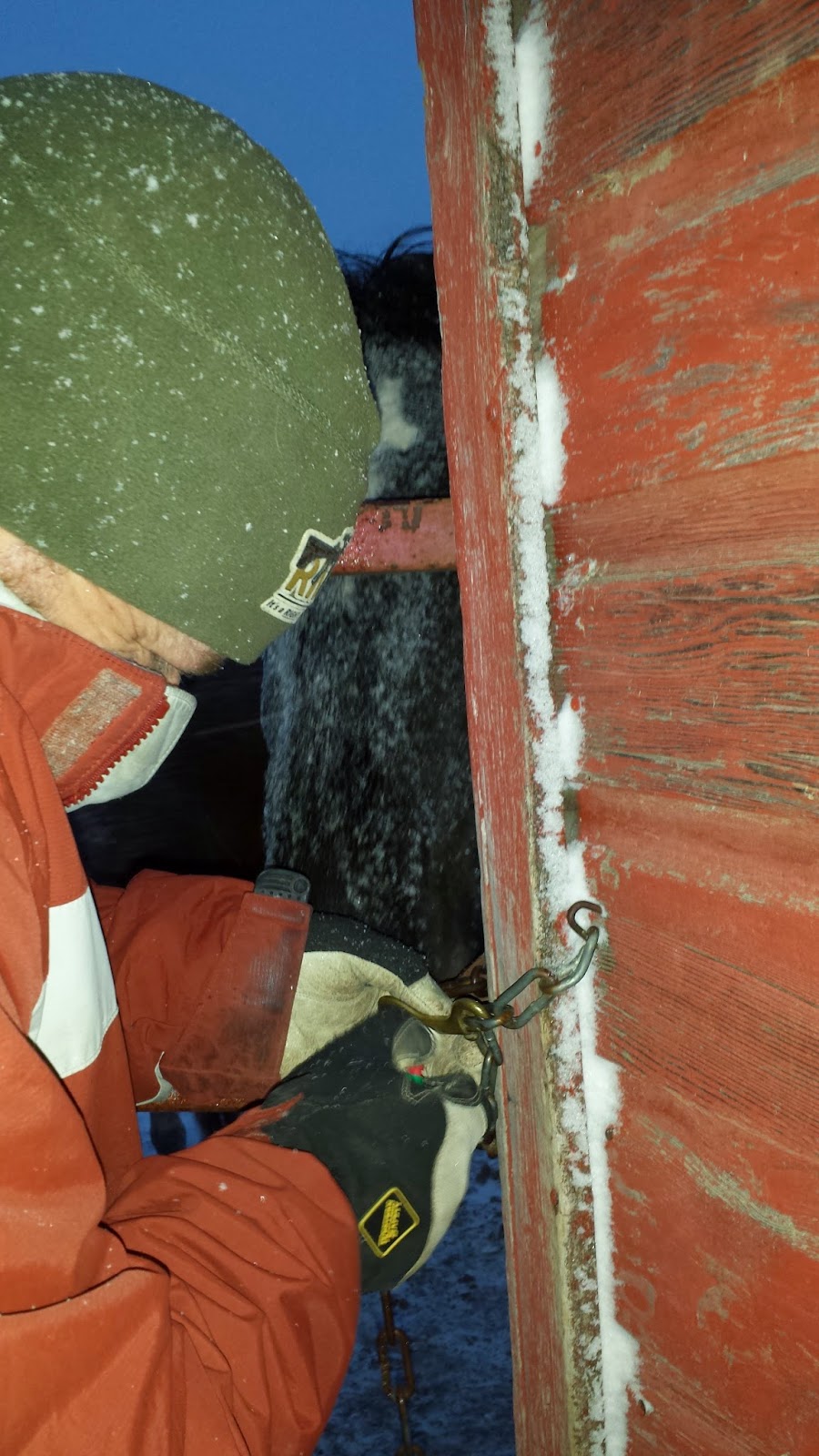 It wasn't just one gate that we couldn't get into, but both the "people" gate and the gate into the hay.  When we realized that there was no way those latches were going to give, we realized we had two choices:  over or under.


Trust me when I say climbing gates was a lot more fun when I was a kid.  It was so cold my gloves stuck to the metal.

We sprayed WD-40 in the latches daily, and waited for the day it would warm up enough we could move the latches.  After four or five days, it finally warmed up enough for me to get one of the thumb latches to move.  Because it was still bitter cold, I didn't risk re-locking the chains.  Instead, I used baling twine to tie shut both gates.

After about a week of tying the gates shut, it warmed up enough that we decided to trust the thumb latches again.  So far, so good (but we haven't been as bitter cold as we were then).  Hopefully the amount of WD-40 we pumped into the latches will keep them working nicely the rest of the winter.
Posted by GunDiva at 12:00 PM No comments: Links to this post