NOW I'm starting to get excited.  Maybe I just didn't let myself believe this was really going to happen, but in just two sleeps, I'm headed to Canon with Beel and Jay to be chosen.

Okay, maybe not the final, final countdown, but the countdown until I go to Canon City to get chosen by a new horse.

I have just a couple of things left to do, but for the most part, I'm ready.  I even bought a helmet, which is a first.  I received a very nice Troxel "Sierra" helmet when I was a cast member on Horse Master.  I only wore it a couple of times after the show, because the weight of it gave me a wicked headache, not that it was heavy, just that with my T.O.S. (thoracic outlet syndrome), I don't tolerate neck stress very well.  When one of the wranglers showed up for the season with stitches and doctor's orders to wear a helmet any time she was around a horse, I gladly gave her my beautiful Troxel helmet.

I have no intention of needing a helmet, and agree with a friend of mine who said that if she ever felt she needed a helmet before getting on a horse, she would do more ground work.  I feel the same way.  However, the ground is hard and there are lots of rocks on the trail.  I can do a lot of desensitizing down here on the flat-lands, but up on the trail, there are tons of things that can cause a spook.  I'm not worried about getting bucked off in a temper tantrum, but I do worry about becoming unseated from a spook.

Troxel has a line of "Rebel" helmets, which are lighter weight than the trail helmet I had initially.  While I'm not at all a pink girl, I kept coming back to this helmet, and with my "three times" rule I had to click "buy" when I returned to it for the third time. 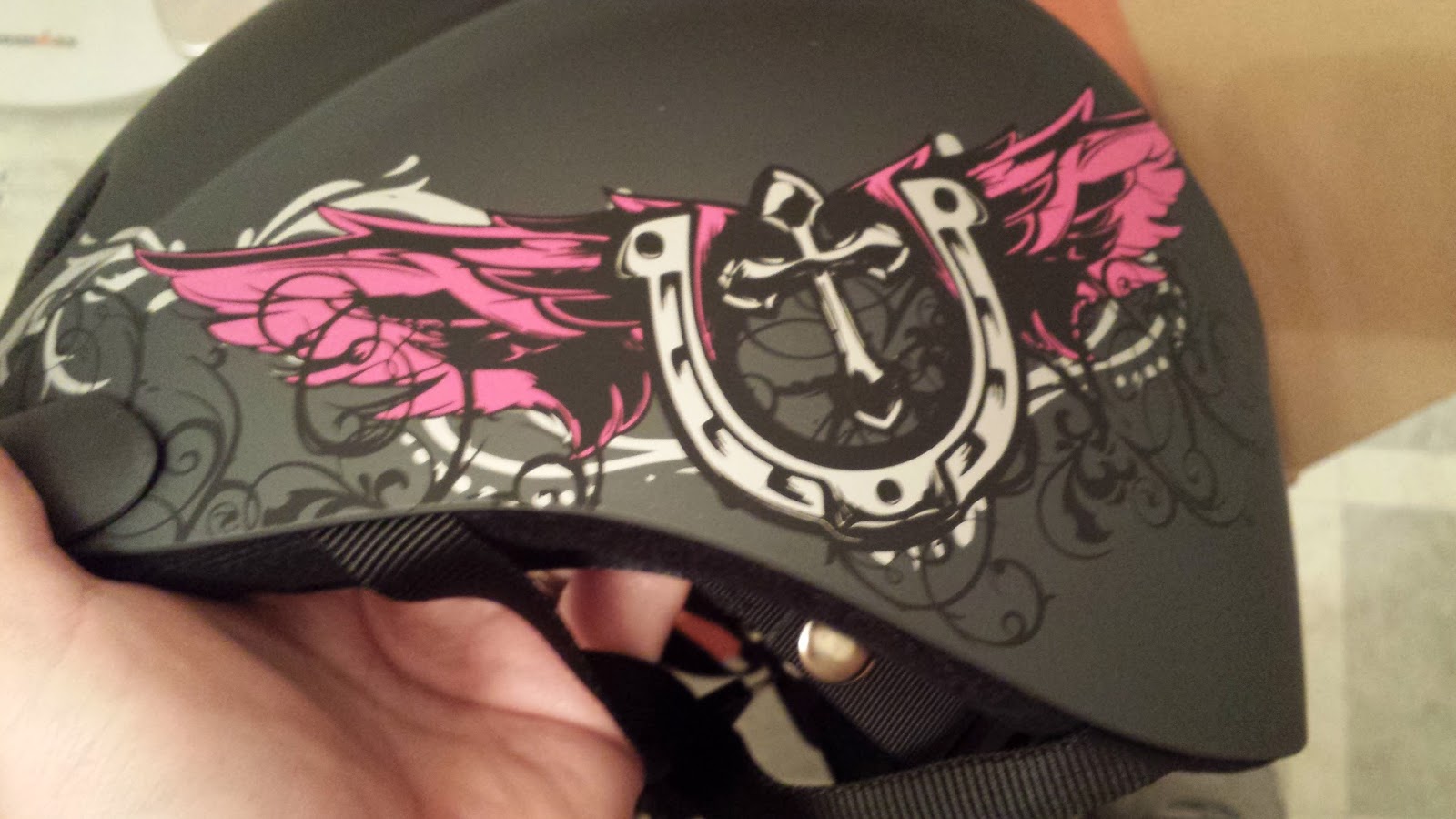 Now it's a hurry up and wait game.  Mom is pee-herself-excited about the new horse.  I suspect Bill is too, but he's playing it cool.  Me? I'm terrified. (And excited, but mostly terrified - just like I was approaching each of my due dates with the kids.)
Posted by GunDiva at 9:54 PM 4 comments: Links to this post

One of the things that I was worried about was adopting a horse who had been with a herd its whole life and bringing it "home" to a place with no other animals.  Elli's amazing and letting me use her property is really the only reason I'm able to embark on this new adventure.

But I was afraid that the new horse would be lonely and would holler and race around and generally make a nuisance of itself.  Or worse, break out of the pen in search of its herd (that's what Mom's horse, Jesse, would do.  She would just go find her herd by herself, thankyouverymuch.).

I was seriously considering adopting a burro, too, just as a companion animal.  But what would I do with a burro?  They're cute little critters and I love their long ears, but I don't pack, so it would just be an eating/pooping pet for the new horse.

Mom and Bill were obviously thinking along the same lines, so Bill offered up Ranger to babysit for the first week or so, until the new one gets settled in and realizes I'm not a horse-eating monster.

Once we know when delivery day is, we'll decide when to bring Ranger down.  No more than a couple of days in advance because we want him to settle in, but not "claim" the space as his.

Two weeks from tomorrow is when we go to Canon City to pick out a horse, but no cameras/cell phones are allowed, so Bill vowed to create some of his "famous art" so everyone can get a sneak peek at the my future favorite child.

Hopefully, in three weeks, I'll have my new bundle of joy "home" and we can get to work :)
Posted by GunDiva at 10:40 AM 3 comments: Links to this post

Yesterday, I talked Bill and my sister's family into helping me built a pen for the newest member of the family.

Bill was kind enough to bring down his truck so we could pick up some panels he found.  I've obviously spent too much time doing "city" business.  I figured we'd go, pick up the panels, pay and be on our way.  But it didn't work out that way and I'm glad.  I much prefer doing "country" business, but in the hustle and bustle of day-to-day life, it's easy to forget.

In the way of doing "country" business, we learned about his menagerie of animals, his daughter and her two sons and his back surgery.  Luckily, I had Bill with me who does the "country" business thing much more naturally than I do. Half an hour later, we had my new panels loaded up and were on our way to pick up the rest of the supplies.

For the cost of lunch at Red Robin, I got a ton of labor out of Nebalee's family.  I know I got the better end of the deal.

We started by cleaning up the existing shed.  One of the requirements for adoption is a shelter with at least two sides.  Initially, I had grandiose dreams of building two pens; one within the shelter and one for working, connected by a gate.  Once I added up the cost of the eighty-bajillion panels and extras I needed, I decided to go with a simple 20' x 20' square.  The majority of the pen is under the shelter, with about 6' x 20' is outside. 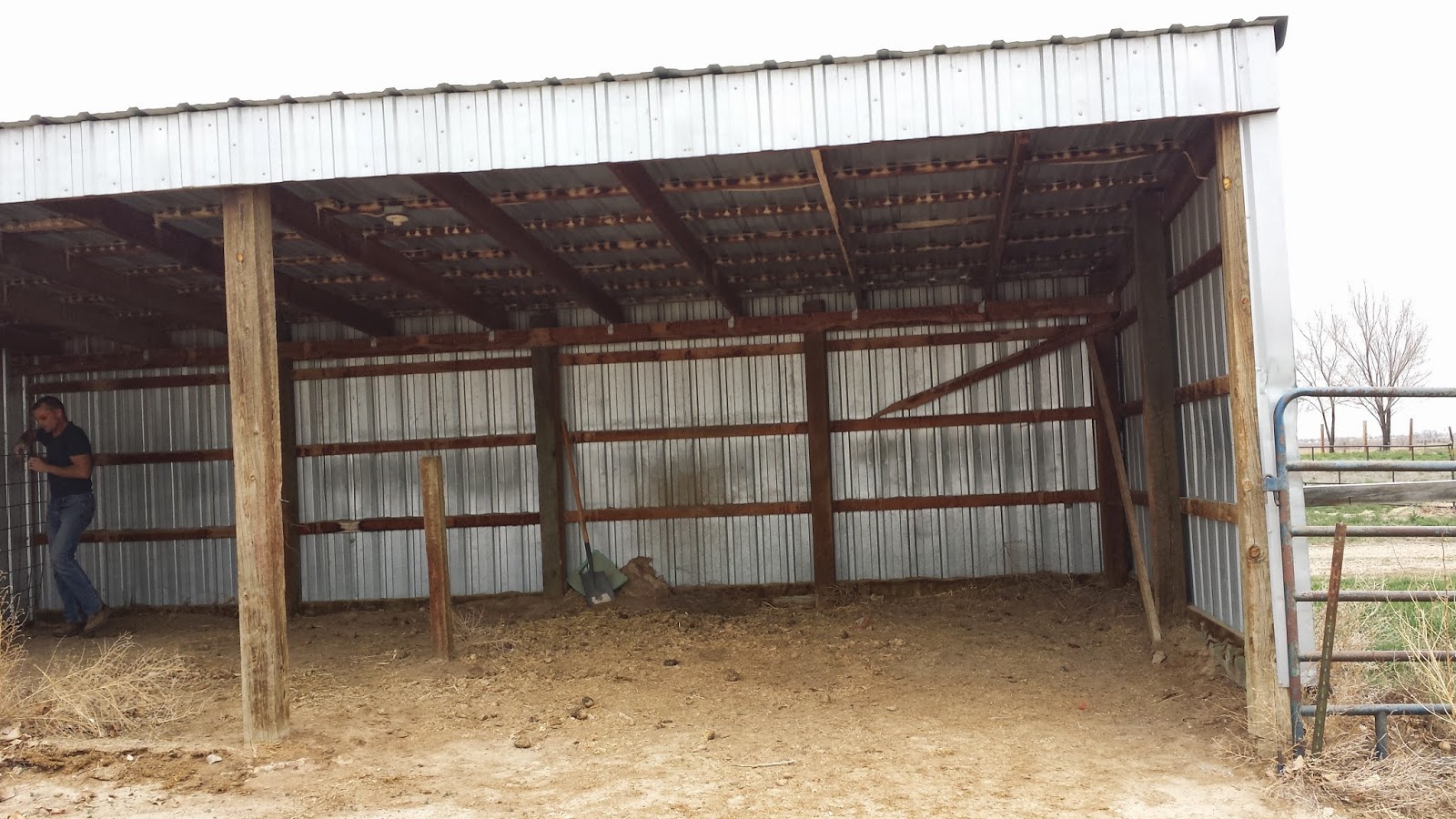 We started by bracing the panels to the existing supports with "holey tape". 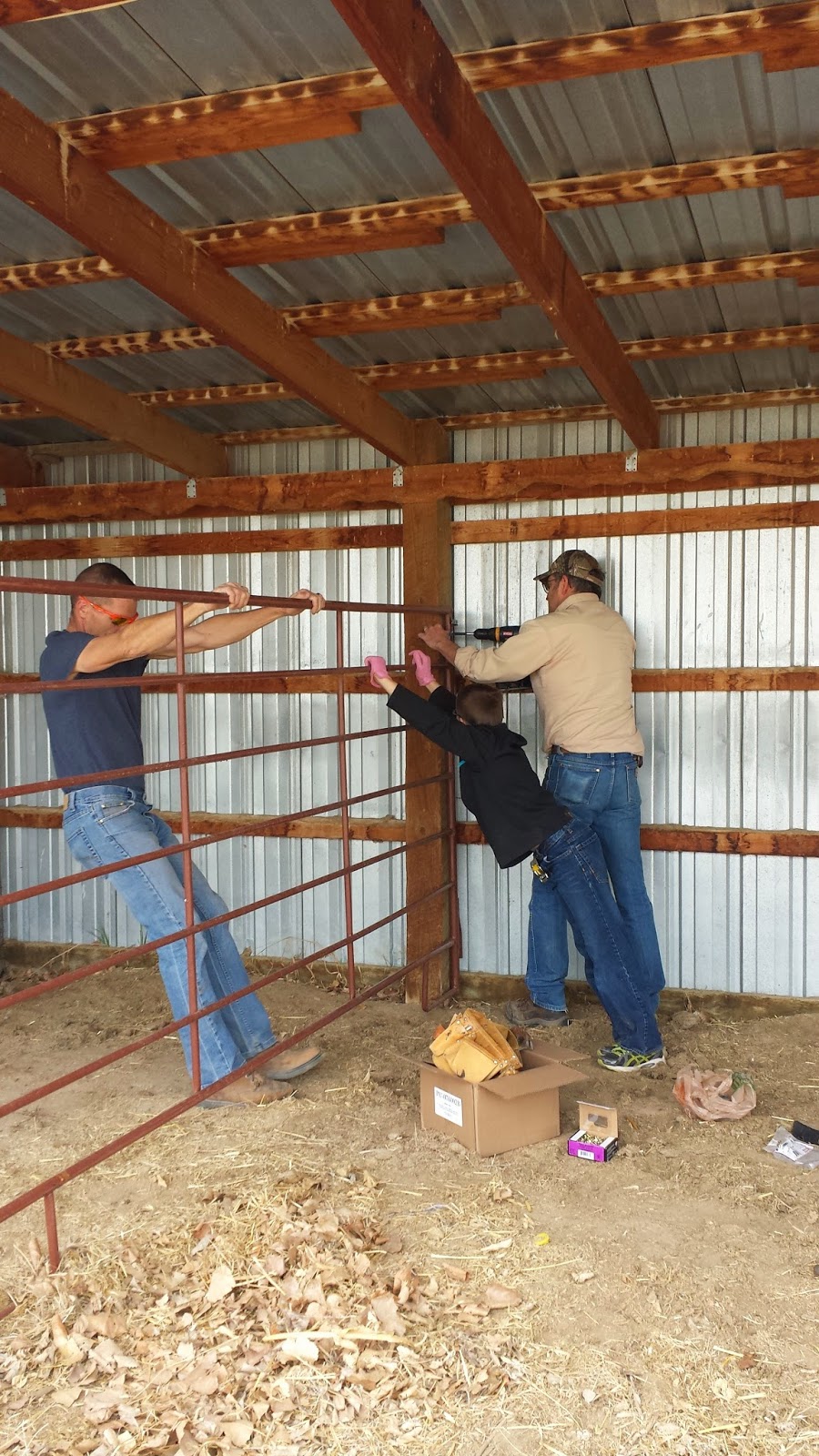 Nebalee and Asset marked our 2"x4"s at 6' so we would know where the top of the rail had to be. 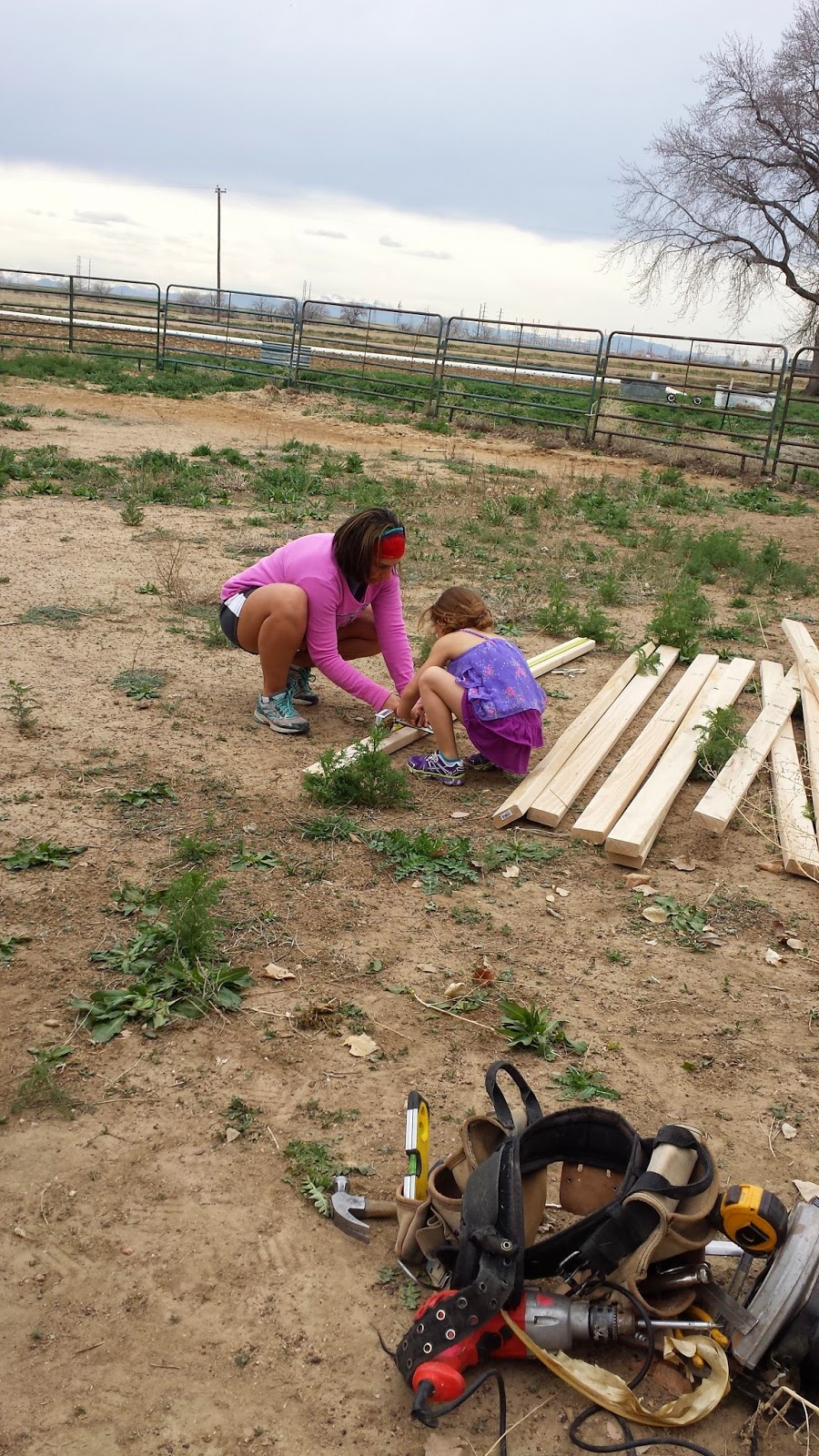 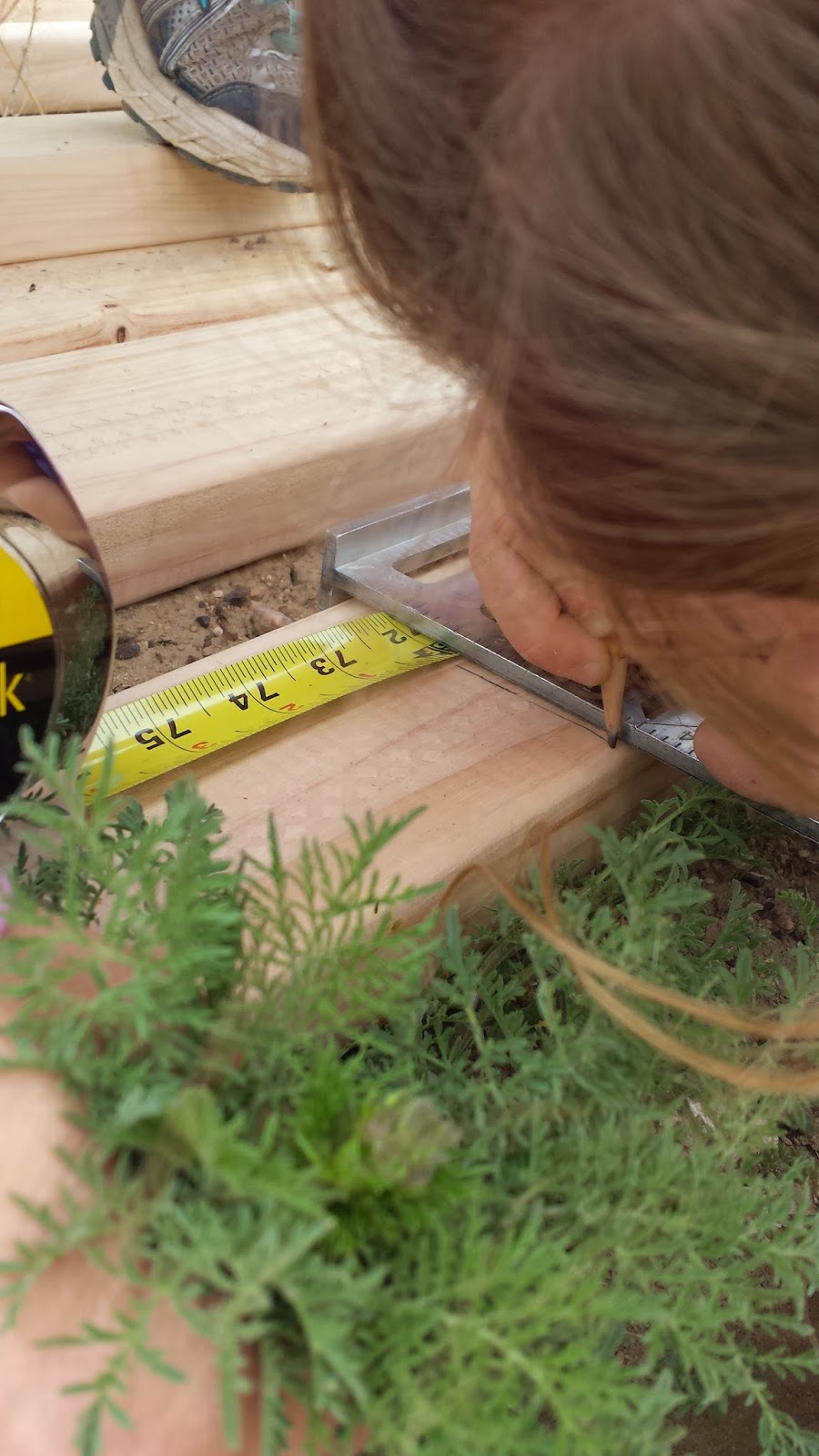 Little by little, the pen went up.  First the panels, then 2"x4" supports with a rail at 6' to meet the BLM's height requirements. 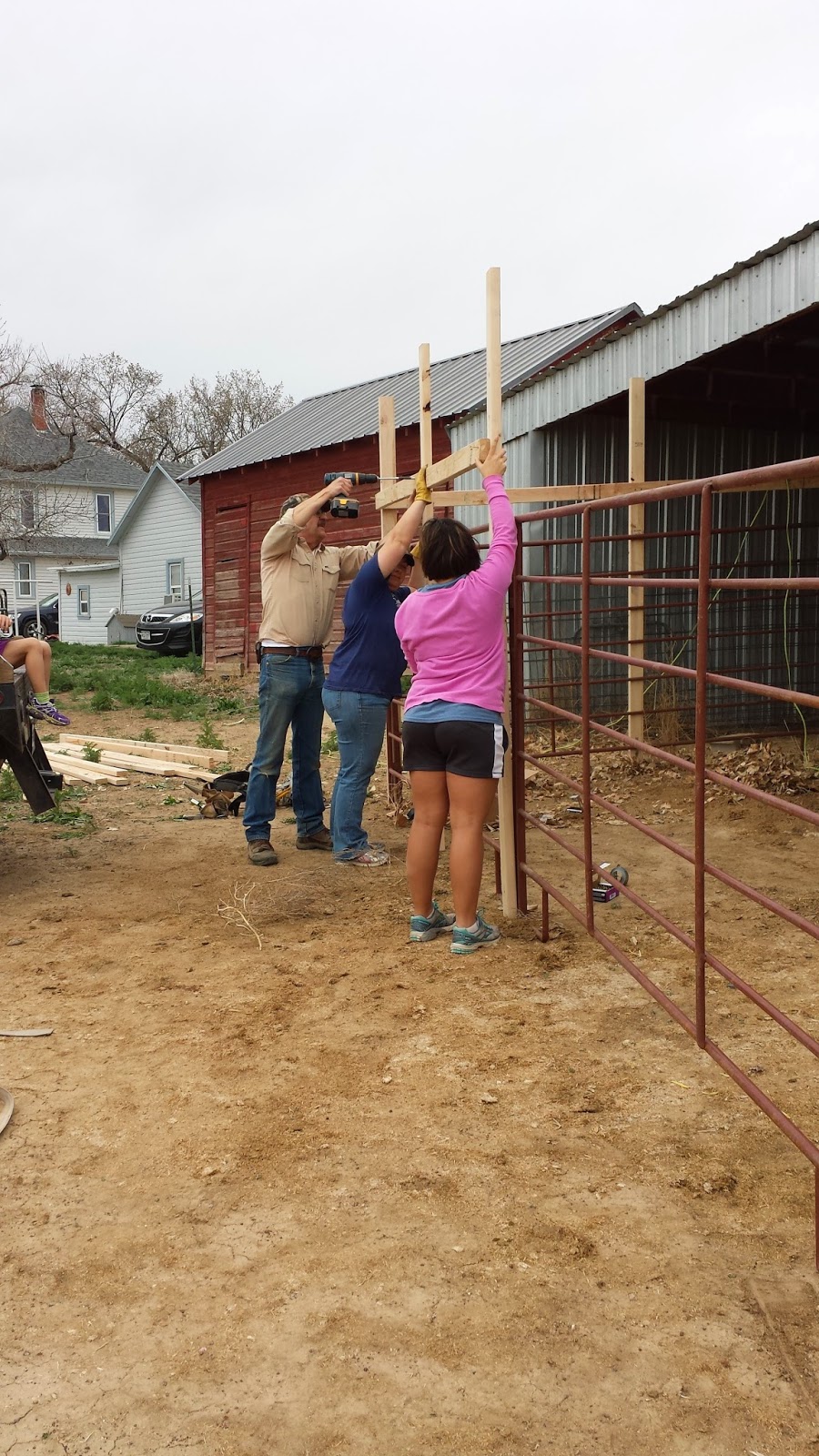 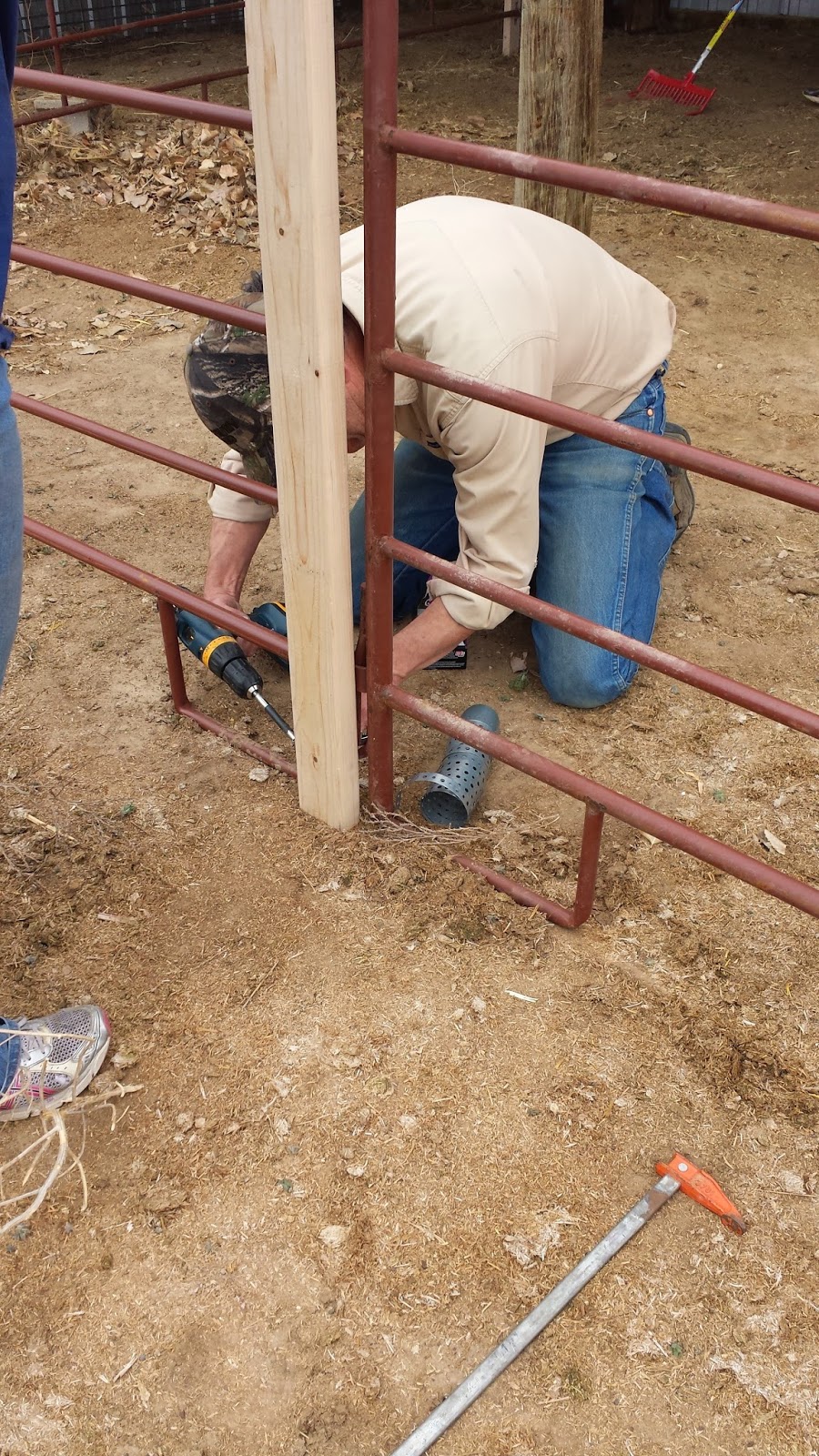 Kyzzer worked his butt off cleaning out the pen.  The last tenant left a lot of used hay behind that I wasn't excited about, so Kyzzer hauled it all off for me. 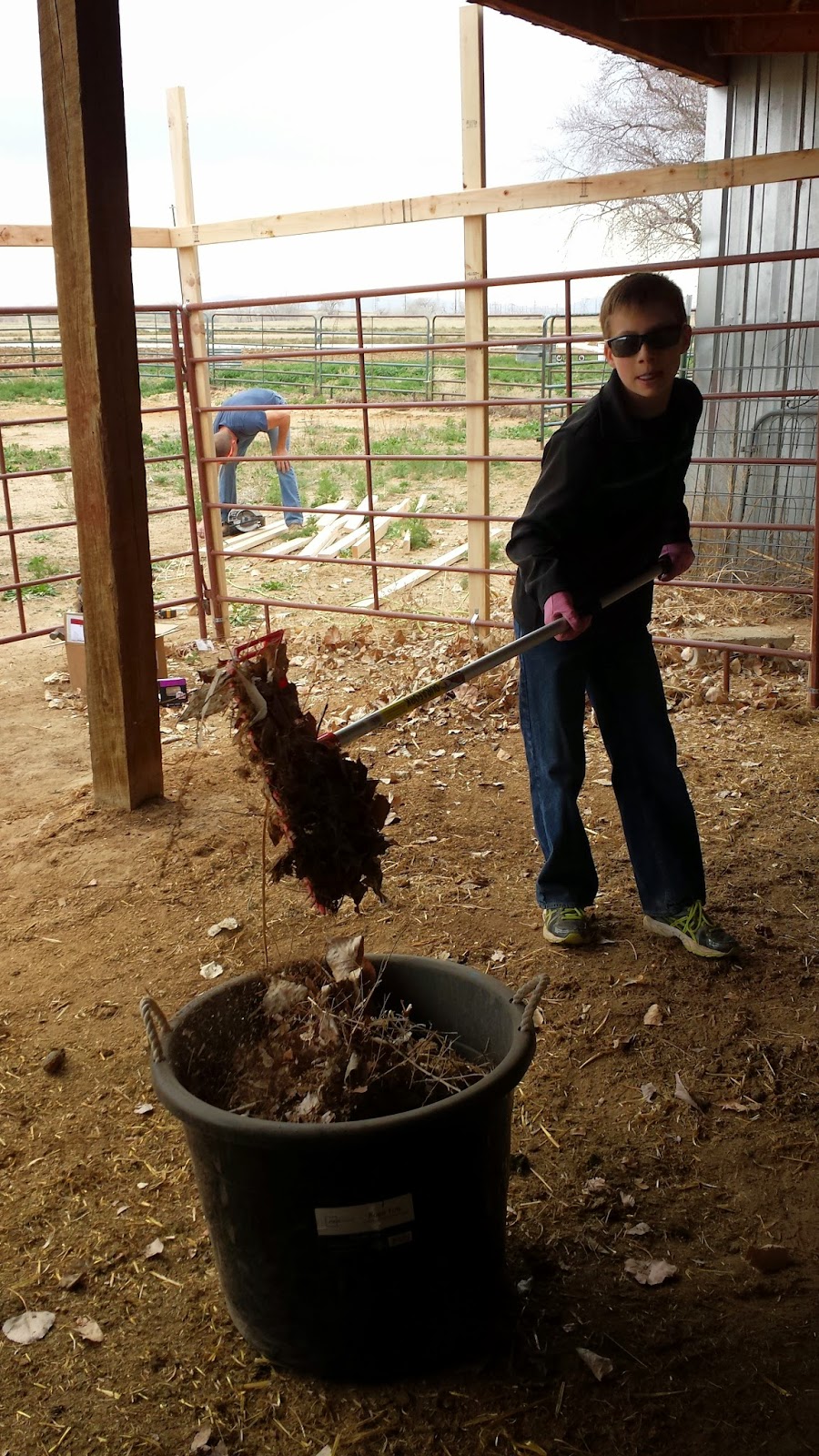 I bought a 4' gate, but had a 6' gap, so we had come up with a solution.  The solution? The water trough and additional 2"x4" rails to make up the difference. 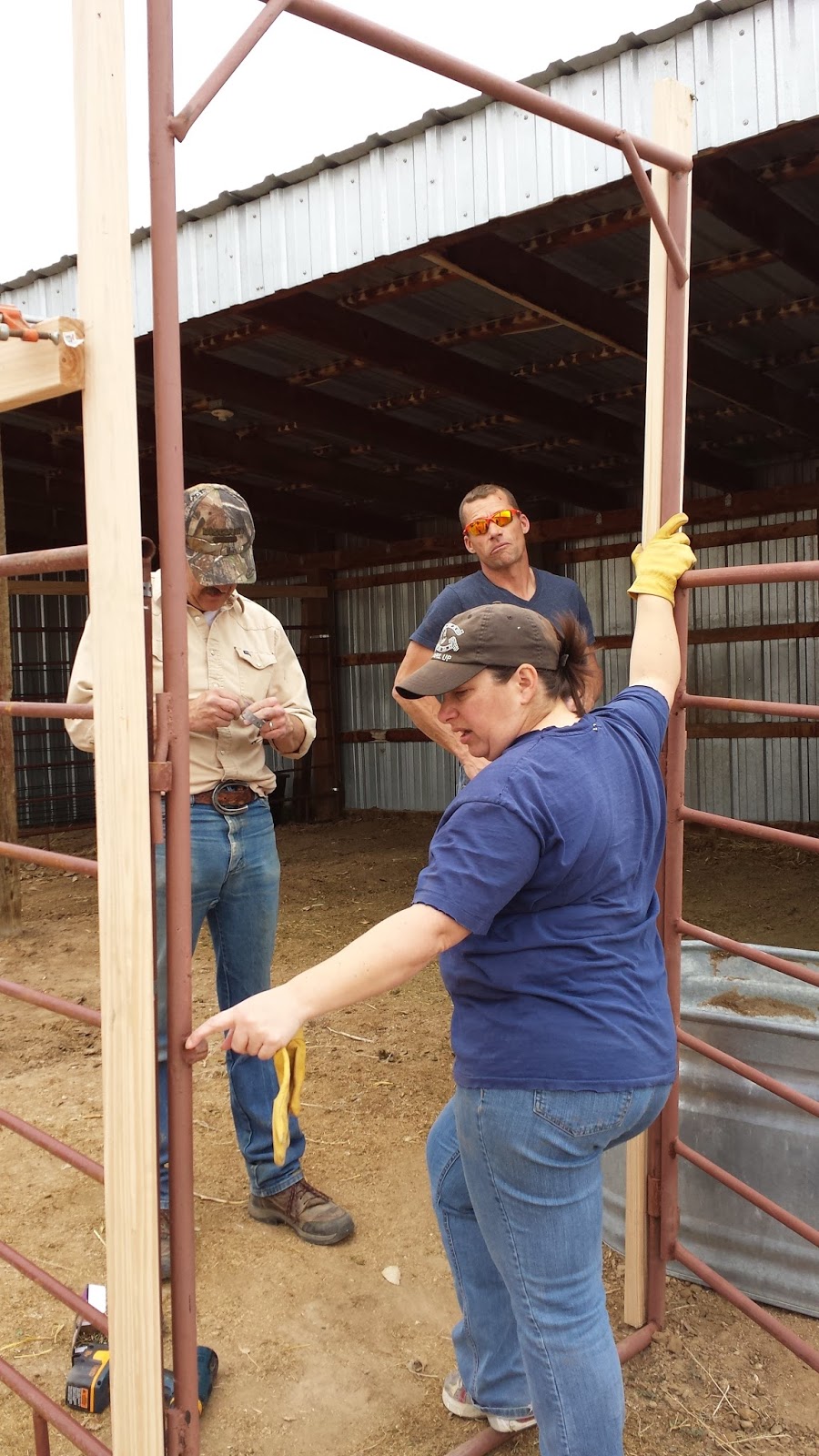 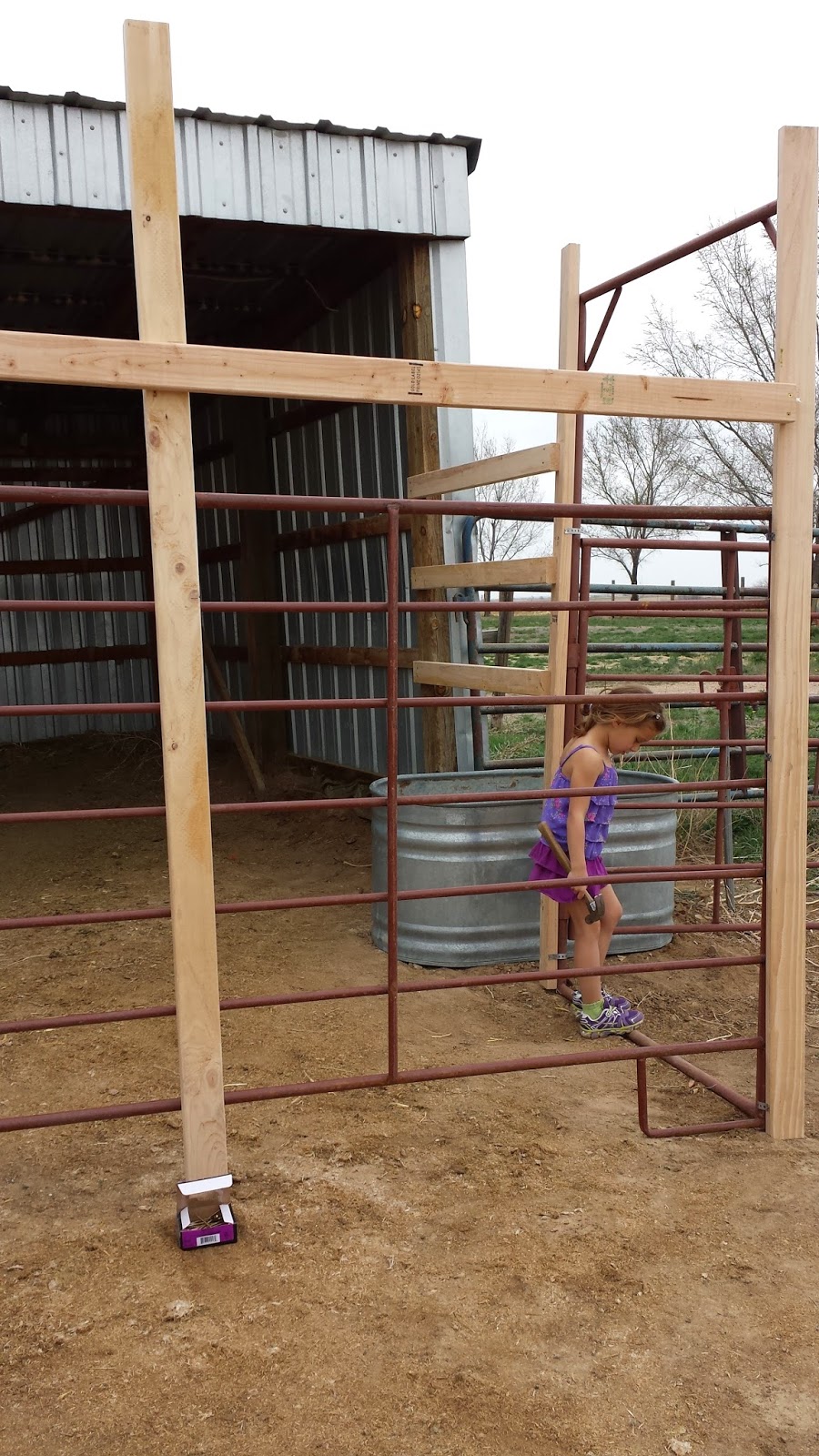 While we were figuring out the missing two feet issue, Asset was going around the inside of the pen removing any nails or "pokey" things that a scared horse might get hurt on. 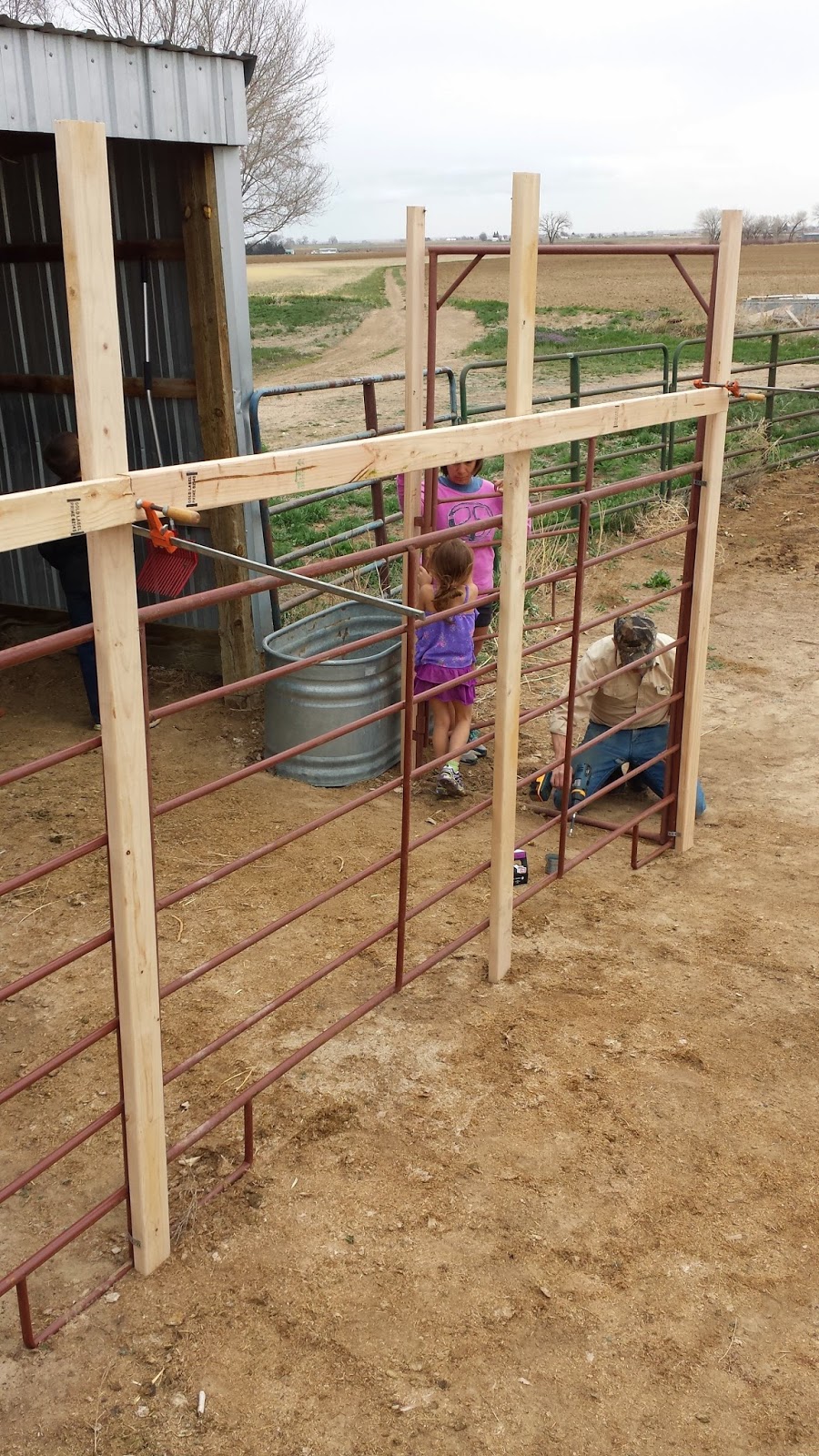 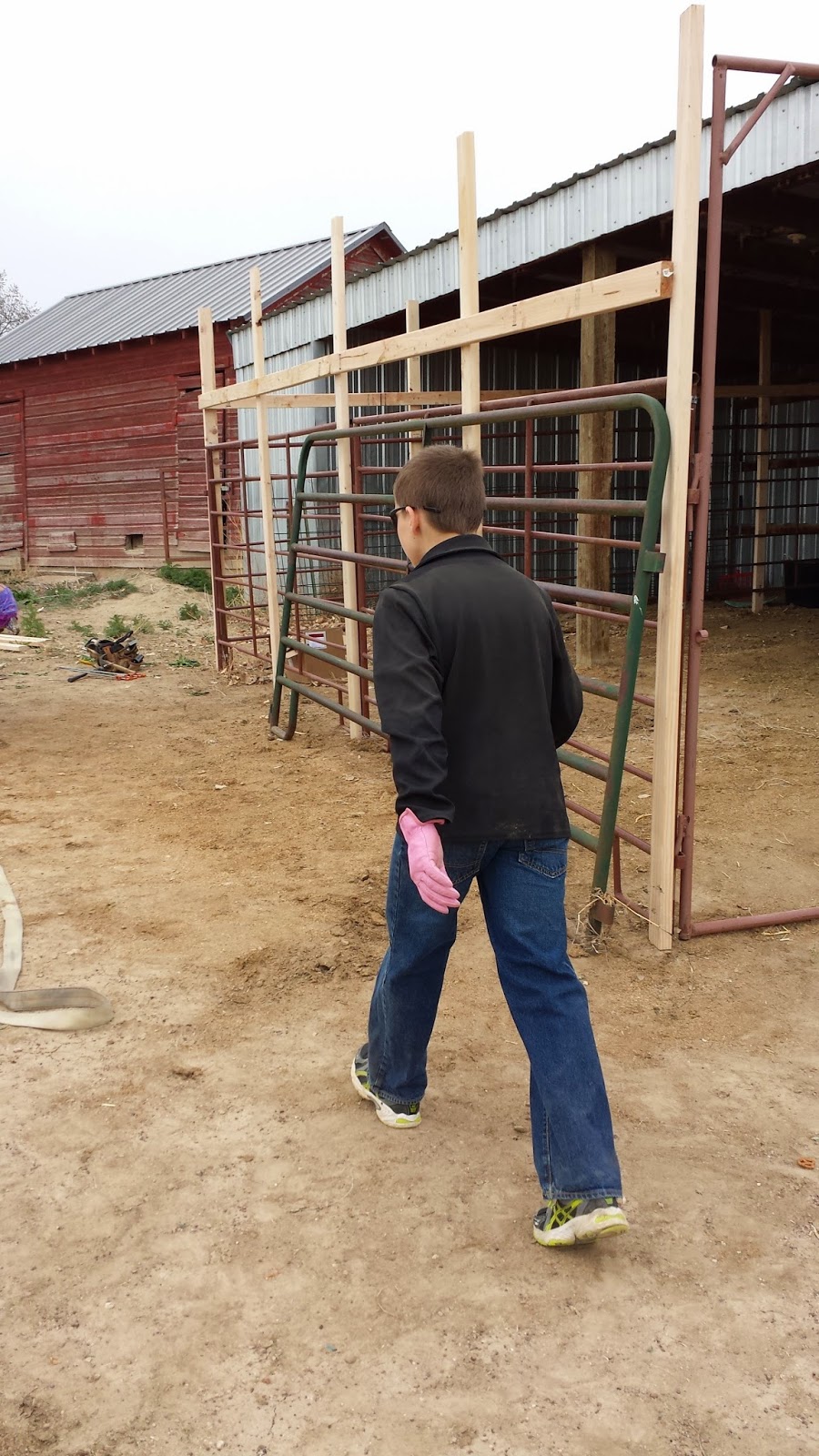 After two hours, we had a pen.  It's not pretty, but it's clean, secure, and safe.  We've got an idea of how to make a temporary chute for delivery day, but instead of rigging it up in advance, we'll wait until the livestock hauler gets there and let the driver tell us how they want it set up.
Posted by GunDiva at 8:07 PM 5 comments: Links to this post


I hate self-promoting, but I will very shortly have another mouth to feed, so remember I wrote a book based on my experiences as a wrangler.  You can pick up Tales from the Trail (the book) from Amazon for $1.99 (Kindle) or $6.29 (paperback).  It's earned 4.9 out of 5 stars on Amazon, and not even all of my reviews are from family members!

Or, if you've read Tales from the Trail, but not my novel, Hunted Lyon, you can also pick that up from Amazon for reasonable prices.  The Kindle version is $2.99, and the paperback is $9.61.  Hunted Lyon is rated 4.8 out of 5 stars, and, like Tales, not all of the reviews are from family members. :)


If you have read either of my books (or both) and enjoyed them, please consider posting a review on your blog, Amazon, or Goodreads and be sure to tell your friends about them.  Word of mouth is essential for Indie Authors like me.  Thanks in advance :)
Posted by GunDiva at 11:38 AM 1 comment: Links to this post

May 2nd is The Day

I got a call from the BLM today - they approved my application!

As soon as the elation hit, fear was right on elation's heels.  Oh my God, what am I going to do with a mustang?  I'm pretty good at figuring out the logistics of how to get the horse, but what am I going to do with the horse?  I'm trying not to freak out a bit, because I just got myself into a twenty-plus year relationship.  You know, it's the same kind of fear when you find out you're pregnant: excited and terrified all at the same time.

It's very much like bringing a human into the world: I want a horse who is a good citizen, with good manners.  A little bit adventurous, but well-behaved.  Independent enough not to need me for every little thing and able to make good decisions.  One I can take anywhere and not be embarrassed by their outbursts.

I know what I expect out of a horse, but what really scares the hell out of me (just like it did when I had my kids) is that it's up to me to instill those values in a horse.  And just like when I had my kids, there's no one-size-fits-all manual to tell me how to do it.  Sure, there are lots of experts out there and lots of resources, but so many to choose from!

I didn't know how to parent, either, and I managed to get through it with three distinctly different personalities.  Any time I get too panicked about adopting a horse, would someone please remind me of that?

Posted by GunDiva at 10:39 AM 3 comments: Links to this post