I promise I'll get Copper's year-end review up soon. In fact, I should be working on it right now, but I have to tell you about my Ho-lee Shit moment.

While I started the year off well with riding a fair amount, I had to rejoin the real world which has severely cut into my riding time. Autobot was kind enough to take Skeeter to Posse training for me while I got ready to leave for SHOT Show, and then took her to a de-spook clinic the day after I got back from SHOT so I could help teach a concealed carry class.So while it's been about three weeks since I've ridden Skeeter, she has been getting ridden, and in some pretty high stress situations.

I planned on riding yesterday, but my "quick" project turned into more than five hours and I ran out of time. The weather today was perfect, so I was bound and determined to get a ride in. Skeeter was a bit distracted by the neighbor kids playing, so we did some groundwork to get her brain in the game.

It sort of worked, but I decided I was going to ride anyway, and saddled up. 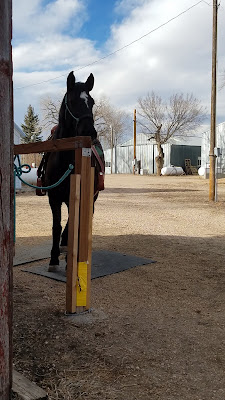 She wasn't 100%, because she was busy hoovering up her sister's leftover breakfast. Before I saddled her, I tied her too short to reach the ground and let her finish sorting the gravel from the food that she had in her mouth. Or so I thought. When I went to bit her up, a whole mouthful of gravel/food pellets fell out. That silly mare was hoarding food, saving it for later, just like she does with water. We had a discussion about whether or not she was allowed to keep a mouthful of food with her bit in (she was not).

Before I mounted up, enough little things had gone wrong I almost aborted my ride, but decided that I would regret it about five minutes after I put her away. That's almost always how it works, so I mounted up anyway.

Skeets circled the mounting block a couple of times, but finally stood still long enough for me to get my foot in the stirrup, at which point, she took off at a trot. I had my left foot in the stirrup and was in the midst of swinging my right leg over her back.

Thank God, I have ample practice with the running mount, thanks to Queen Estes and was able to not-very-gracefully get myself situated in the saddle while pulling her head around to the left. Once settled, I sent up a quick prayer of thanks to Estes for training me so well. Then I cursed Skeeter a little bit, because she's taller than Estes and if I'd had to do an *actual* running mount, it would have ended very differently.

I knew we'd have a short ride, just based on her lack of focus, but also refused to get down until she relaxed and started to pay attention to me. We did circles, worked on our stop/back, did baby pivots, walked over the pallets, basically anything that required her to think. When she stretched her head down to scratch her face, I decided she was relaxed enough and made one more slow lap around the yard before calling it a day.

I dismounted at the far end of the yard and was walking back to the the hitch rail with her, lecturing her on her shenanigans and explaining that shenanigans were not acceptable. I saw the mounting block and thought I should mount up again, only I thought I'd attempt to mount from the ground. She's just enough taller than Estes that it's difficult for me to do so. I didn't want to use the mounting block, and couldn't reach the stirrup from the ground, so I turned her back toward the pallet. I don't need a lot of a boost to mount up, but the four inches the pallet gives me is very helpful.

About halfway to the pallet, I heard a "pop" and felt Skeeter jump. I turned around to see her bridle wasn't ... right. It took me a second to realize that it had broken and was hanging off of her face. The bit was swinging down by her chest and she looked quite perplexed. I should have taken a picture, because the look on her face was priceless. I initially assumed that the throat latch had given way, since it was missing a Chicago screw. I noticed it a few rides ago, but didn't worry about it, because there was still a tight screw in there and if the throat latch breaks, it's no big deal.

Only, it wasn't the throat latch. In fact, the throat latch was the only thing keeping the bridle on her. When I unbuckled it, the whole thing fell right off. I picked it up and called it a day. 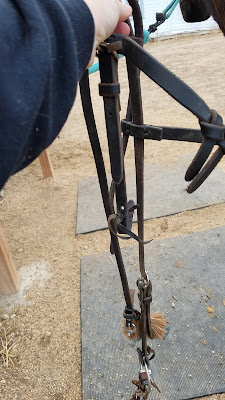 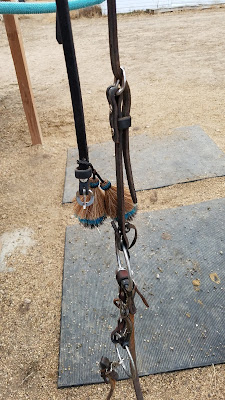 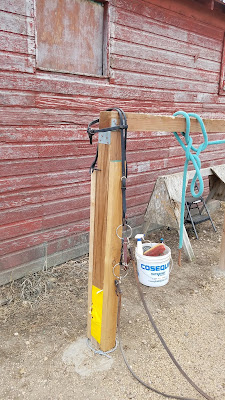 The tie on the off-side cheek piece broke. At first, I thought it had just come untied, but when I looked at it more closely, I realized it had snapped in two.

My guardian angel was certainly looking after me today. Everything went right. I maybe should have listened to the little voice in my head that told me not to ride today, but I didn't. When Skeeter took off while I was mounting, I used the left rein to pull her head around. I can't even imagine - wait, yes I can - the wreck that could have happened if I'd pulled her head around to the right and that tie had broken. I couldn't get my foot up to the stirrup from the ground, so I had to head to the pallet, and it was in those twenty feet that the bridle broke. What if I'd been able to mount and then it broke? Yikes.

Then it hit me - what if that tie had broken while Autobot was riding Skeeter for me? When Skeets gets stressed, she gets really heavy and pushy in the bridle. Nebalee would never forgive me (and I wouldn't forgive myself) is anything happened to her daughter while on my horse.

I put Skeeter away, then decided to do a bit swap. I could have re-threaded a new lace into the bridle, but I knew I'd never be able to trust it again. Instead, I used a skill I learned from the Bionic Cowgirl and started switching around tack. Skeeter's bit went onto Pearl's western bridle. The bit on Copper's bridle was a touch too big, so the bit that was on Pearl's bridle went onto Copper's and Copper's bit will go to Saddle Up on consignment. It all worked out perfectly. 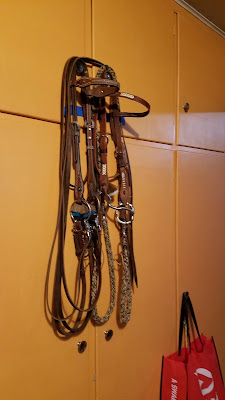 It was a good thing I decided to do the bit swap, because I realized the leather was in desperate need of a good oiling. The leather just sucked it right up. In fact, I'll oil them again tomorrow before I ride. I also took the opportunity to replace a couple of missing Chicago screws (how the hell do they just disappear?) and check everything over.

I will ride tomorrow.

And there will be no more shenanigans.
Posted by GunDiva at 8:47 PM 3 comments: Links to this post