Jay decided he needed a HellHat as well, so when we weren't riding on Saturday, we spent the day shopping for a hat suitable for him to make one. We hit a Western store and Jay found, in his words, a "fabulous" hat that made us both smile.


We wandered around the store looking for a more appropriate hat, and I wandered off to the ladies' section to find a second hat, so I could make my "winter" HellHat. Instead, I found THE BEST BOOTS EVER! I instantly fell in love with them and fawned over them, before heaving a big sigh and putting them back. Even on sale, they were too spendy for me. However, my hubby loves me and bought 'em for me.

While I scored at the store, Jay did not. We had more running around to do, and horses to ride, but afterward, we ran to the County Fair to see if they had any hats that would work. It took us no time at all to find just the right hat for Jay's HellHat. 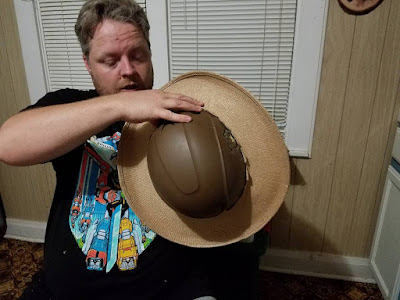 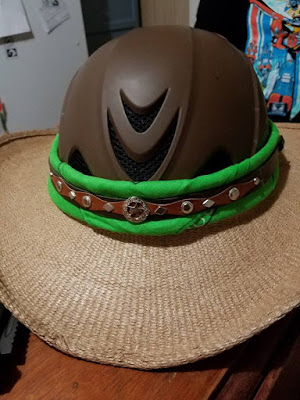 I love that he's joined the HellHat Posse with me. He was good about wearing a helmet, but the HellHats are so much more fun and less stick-out-like-a-sore-thumb.
Posted by GunDiva at 8:00 AM 1 comment: Links to this post

When I got Skeeter, I made the decision to wear a helmet every time I ride. There's really no excuse not to, except that helmets and Western riders are kind of like oil and water. However, I'm getting older and the thought of a TBI (Traumatic Brain Injury) sound like no fun at all. After Asset's fall from Ranger a few years ago, I've been very pro-kids wearing helmets, but it took me getting a green horse to jump on the helmet bandwagon.

My friend Tracey from Mustang Diaries introduced me to "Karen's HellHat Posse" on FB. I'd never seen such cool helmets ... er ... hats. From the HellHat Posse FB page:


My husband Mark Plumlee made me my first HellHat after I fractured my skull, just 5 weeks before the CMSA World competition in October 2013. He made my first HellHat that November 2013. In 2014 I won my first World Championship as a Senior Lady 2 wearing my HellHats! It truly gave me the confidence to get back in the saddle. As a spectator once told me, "You know what that hat tells me? It tells me that "somebody Loves You" and "That's one Hell of a Hat!".

From the time I first laid eyes on a picture of one, I knew I had to make my own so one day last week Asset and I assembled the materials and made our own HellHats.

Asset and Nebalee whipped hers together in no time. By the time I was done cutting up a pair of Bill's old jeans, Asset's HellHat was nearly complete.

Posted by GunDiva at 8:00 AM No comments: Links to this post


Last week, Jay and I went on a guided trail ride up in Estes as a "confidence building" ride. Jay hadn't been on a horse since Pearl bucked him off in May. It was his idea to go ride a dead-broke horse, and it was an excellent idea. The horse he was assigned was perfect for him - easy-going, calm, and willing. My assigned horse, on the other hand, was head-strong and bitchy. She had a bad habit of cocking an ear back at Jay's horse, then spinning 1/4 turn to challenge his horse. What I learned from my confidence-building ride is that my Skeeter has never behaved that way and is much easier to ride than that mare was.

For a while now, we've been saying, "we have to get up and ride". The stars aligned on Saturday and the three of us (Jay, L.E., and I) were all in the same place at the same time, and our neighbor's arena was open.

With the trail ride under our belts, and some solid rides on all the horses by Annie, we were ready! Off we went to the neighbor's arena.

It was truly a monumental day - I know how hard it was for me to climb up on Skeeter after being bucked off of Pearl, and I have years of riding under my belt. Watching Jay make two big achievements in one moment seriously choked me up.

Achievement #1: first time on Copper since riding in Jessica's round pen in February/March. No support person on the ground, no trainer talking him through, and in a much larger space than the round pen.

Achievement #2: first time up since getting bucked off. For an experienced horse person, stepping back into the saddle the first time is hard - for a green rider, it's a make-it-or-break-it moment.

L.E. rode Pearl beautifully (I took pictures, but they were all back-lit and didn't turn out) - she can really make Pearl glide. All that classical riding training from her past is very apparent. While the two of them were prancing around the arena looking all fancy, Jay and I were happy to work at a walk. Jay's goal had been to just get up and sit on Copper, but took it a bit further and rode him for fifteen minutes or so. Skeeter and I worked on walking over things; walking into a "box" and turning around in the confines of said box; backing through and over things; figure-eights around jump standards; just "stuff" to keep us both interested.

It was amazing to get to ride with my hubby and L.E. and I look forward to doing more of it. In fact, I'm so thrilled with how Pearl is going with L.E., that I think she's ready for Autobot to ride. Pearl's not quite "kid" ready, but I think Autobot can handle her in the arena.