The weather was gorgeous on Friday - 58*F, sun, and no wind! I had to get in the pen and work with Skeeter. The constant sun/cold/sun/cold had made sheets of ice outside of the pen, so surprisingly the pen had the best footing.

I hadn't been up on Skeeter in a while - about a month. It's been a long time. I had intended to ride her the day we fell apart, and that had been a couple of weeks since our previous ride. I was absolutely determined to get up, even if was only to flex her each way. Things on the ground went so well that I hopped up and we rode around the pen for a little bit. She's quieter with the combo bit than with the snaffle and much more responsive to it. When I dismounted, I was on cloud nine! It was by far the best work day we'd had in a very long time.

Saturday was supposed to be our last nice day for a while, so Mom planned on coming down. After only one day of riding in the pen I knew I'd get bored in no time, so I spent Friday night plotting ways to make it more interesting.

We have a big pallet that we'd been planning on using for a bridge, so I knew I'd pull that out to walk over. Then I started thinking about the scraps we have around the house and came up with some PVC pipes. They aren't very long, but I could pound them into the ground and have 'poles' to work on turning. I was starting to get excited.

When Mom and Bill got to our place on Saturday, I remembered we had some wood things that could be used to hold trot poles, but I didn't have any poles. But we do still have the long 2x4s that we used to extend the pens to 6' tall.

In no time, between Mom, Bill, Jay and I, we'd constructed a make-shift obstacle course. I caught Skeeter and walked her through it. 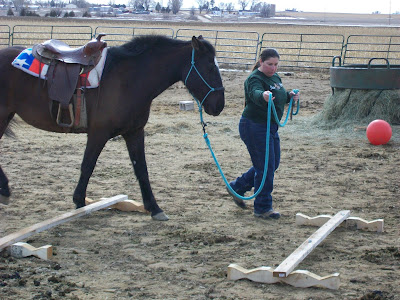 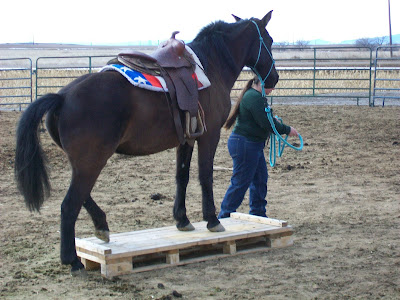 (She looks cresty, but it's her mane growing back. She rubbed chunks of her mane off on the feeder while at Jessica's.)

She did pretty good, so it was time to mount up and RIDE! :)

Doing It My Way, Part II

I had realized the night before that I was trying to be someone I wasn't and that was killing my confidence. I was constantly second-guessing myself, wondering if I was doing it "right".

I woke up excited to work Skeeter. We didn't have a lot of time, but I was going to work her by my rules.

Holy cow, what a difference a day (and a change in attitude) makes. My confidence came flooding back and Skeeter snapped right to.

Julie always says to use the amount of pressure that motivates change. I was trying to be nice and quiet, with very subtle cues, but that wasn't cutting it. Once I went back to what I know I felt so much better.

I asked, expected her to do what I asked and if she didn't, I immediately escalated. For example, she's a bitch about backing. She would evade the correction by just raising her head without moving her feet. However, once I changed my attitude she didn't even think about evading. I gave the lead rope a slight wiggle to ask her to back and she didn't, so I immediately escalated and told her to move with a big, scary correction. After the first correction, it took just a wiggle of the rope to get her to back up. After that, all I had to do was wiggle my finger without moving the rope.

We did circling work (again, I don't think we'll ever be done with that), lots of change of direction, backing, and standing ground tied. She's by no means perfect after one session with the "new" me, but leaps and bounds better than with the "faux" me.

It was a much shorter session than the day before, but when we ended both of us were in a much better place mentally. I'm actually looking forward to working with her again. I hadn't realized that I was dreading working with her before, but now I realize how much my lack of confidence was weighing on me.
Posted by GunDiva at 12:00 PM 2 comments: Links to this post

Doing It My Way, Part I

I started the New Year determined to make headway with Skeeter. That sounds weird, because she's green broke, but she's still got so much to learn (as do I).

We had a break in the weather on January 2nd and we got to work. It was awful. Not a damn thing went correctly. There are two things I despise in horses: pushiness and being food driven. Skeeter was both on the 2nd.

I tried to work through her pushiness and keep her head out of the dead grass. For God's sake, she has a 1,200# round bale all to herself, she does not need to graze. I tried to stay calm, keep my cues clear and work through it, all the while seething. Eventually, through a lot of ground work, I got her paying attention to me and decided to bridle her and go for a ride.

On New Year's Eve I had changed out her bit and bridle to Estes' old bridle and Skeeter's new Myler combo bit. She had done beautifully with it - I worked her over the withers and she gave to pressure beautifully. The bit sat nicely in her mouth and she was much quieter with it than she was with the snaffle.

Since she had handled her new bridle so well, I didn't anticipate the fit she threw about having it put back on. It's not like she threw a huge fit, but Jessica has her so well trained that I was surprised she tried to toss her head up. She thought she might get away with it, but her mommy has bridled some of the worst horses around, so she lost and had to wear her pretty bridle.

I worked a bit more on ground work and then decided to mount up. I still can't find my damn stump so off to the trailer we went. And then her brain fell out her butt again and she forgot how to line up at the trailer. I continued to try to channel Jessica and stay calm with clear cues. Didn't work. I got frustrated because I figured I was doing something wrong and decided to walk her over to a pile of pallets, intending to use them as my mounting block.

Skeeter lined up beautifully, so I shortened her left rein a bit to tip her head toward me as I mounted. Just as I put my left foot in the stirrup, she decided that by tipping her nose to the left I must have wanted her up on the pallets with me, so up she came.

I'm not even kidding. I went from, "I'm really trying hard not to be pissed as hell at you" to laughing my ass off in about half a second. I backed her down from the pallets and lined her up again, chastising her to behave herself so I could mount up. Again, just as I got my foot in the stirrup, she stepped up on the pallets. It was not so funny the second time and my frustration meter skyrocketed.

I decided someone was trying to tell me that riding wasn't going to happen, so I backed her back down off of the pallets and we did more groundwork until I could find a decent stopping point.

When I turned her back out into her pen, she seemed as frustrated and relieved as I was that we were done.

I stomped into the house, absolutely livid with both of us. It took a while for me to calm down, but once I did, I realized I was trying to be someone I wasn't.

Skeeter knows what to do - she's fully trained. Green, but trained.

I mulled it over throughout the day and realized that I'm not Jessica, I can't be her and the harder I tried the more frustrated I got.


Eventually it dawned on me that I just have to do me. Me is a bit more abrasive than Jessica, a bit more impatient, but I like to think I'm still fair. I never get after a horse just because - I ask them once, give them a chance to respond, and then tell them.

By the time I went to bed, I was feeling much better and much more confident.
Posted by GunDiva at 10:43 PM No comments: Links to this post

Jay and I might have lost our minds. You know, even more than usual. Last year during the Rocky Mountain Horse Expo, we spent a great deal of time watching the Mustangs compete in Colorado Mustang Days (CMD). We decided it was a good goal to strive for this year.

We both entered in three classes as amateurs: Pleasure, Mustang Race (similar to extreme trail), and Freestyle.

Skeeter spent 45 days or so at Jessica's getting green broke, but I haven't had as much time to work with her as I had hoped. If I'm lucky, we work twice a week and I've ridden even less. Copper is still at Jessica's for training - his 60 days is definitely getting stretched out because of the weather. When Copper comes home, Jay will have approximately four weeks to work with him before we head out to CMD in Denver. I feel like Jay's going to have an advantage because Copper will be fresh from training, while Skeeter has been sitting more than working.

Needless to say, I'm a bit nervous and a whole lot terrified. I've never shown at all, in any way, shape, or form, in my entire life (and neither has Jay). I know that we'll be fine and that should anything happen, we'll work our way through it and that this is supposed to be a learning experience.

Jay is handling it like he always does - nice and calm. Talk about someone who is unflappable. He and Copper are mirror images of each other.

Skeeter and I are mirror images of each other, too, and that might not be a good thing. I tend to be more high-strung and prone to blow-ups. The good thing is after a blow-up, I'm calm, so there's that.

If you happen to be in the Denver area in March, swing by - we'd love the support.
Posted by GunDiva at 3:00 PM No comments: Links to this post