On November 13, the day after it got *really* cold, Jay noticed that Copper was lamed up.  We thought it was maybe due to ice balls that had built up in his hoof, so we cleaned out his hooves.  Even though we'd never "trained" him to have his hooves picked, he stood like a champ.

Only, that didn't solve the problem and he looked more and more pathetic.  We buted him, which helped for a day, but then he got more pathetic.  I was at a loss, I knew it wasn't an abscess and we had cleaned his hooves out every day, so I know there wasn't anything stabbing him when he stepped, so I took video and posted it to our Facebook page in hopes that someone would know what was going on.

I was so focused on it being his foot, that it never occurred to me that it could be his shoulder.  We continued with the Bute as needed and just let him be.  Tincture of time has worked and he's still a bit gimpy, but not much, and started trotting around a few days ago.

It was a huge relief to find that it was his shoulder instead of his hoof.  Shoulder injuries heal much better, while hoof injuries can be expensive and may never heal right.
Posted by GunDiva at 11:19 AM 5 comments:

On some of the FB pages I follow, I've seen that people are able to find pictures of their horses before they were rounded up and I got curious to see if there were any of Princess Skeeter.

I went to the Piceance/East Douglas FB page to see if any of their photographers had managed to capture her, but their page only goes back to 2011 and she was rounded up in 2010.  I was bummed, but determined.

I remembered that I had seen a YouTube video of a gather (this was while everyone was up in arms about the Wyoming Checkerboard gather), so I decided to see if anyone had videotaped her gather.

However, the BLM produced a "pre-gather" video explaining the necessity of the gather, so I watched it and there she was!

Her blaze back then took up most of her face (she's grown into it), but you can see it's the identical "Unicorn facing to the right" blaze (thanks for that description Funder).  Here's the video, let's see if you can find her:

There's a lot of talking, but I found her eight times in the video.  I'll post in the comments where I found her, so you can enjoy your scavenger hunt.
Posted by GunDiva at 3:55 PM 7 comments:

It's Not All Rainbows and Unicorn Farts

When Ashinator was younger, she used to like to lay across Jesse's back and play "Dead Indian".  The horses would wander all over the pen with her draped across their backs.  The bonus to Dead Indian is that you can usually just slide down and land on your feet, so we've introduced our weight to Skeeter and Copper's backs by using the Dead Indian "technique".

This past week, Mom and Bill came down to work with Jay and Copper.  Skeeter just got yelled at for being "helpful", since it was Copper's training day.

First, they made some progress with Copper and the trailer.  Instead of flat-out refusing like he's done in the past, Jay managed to get two feet in without a fight. 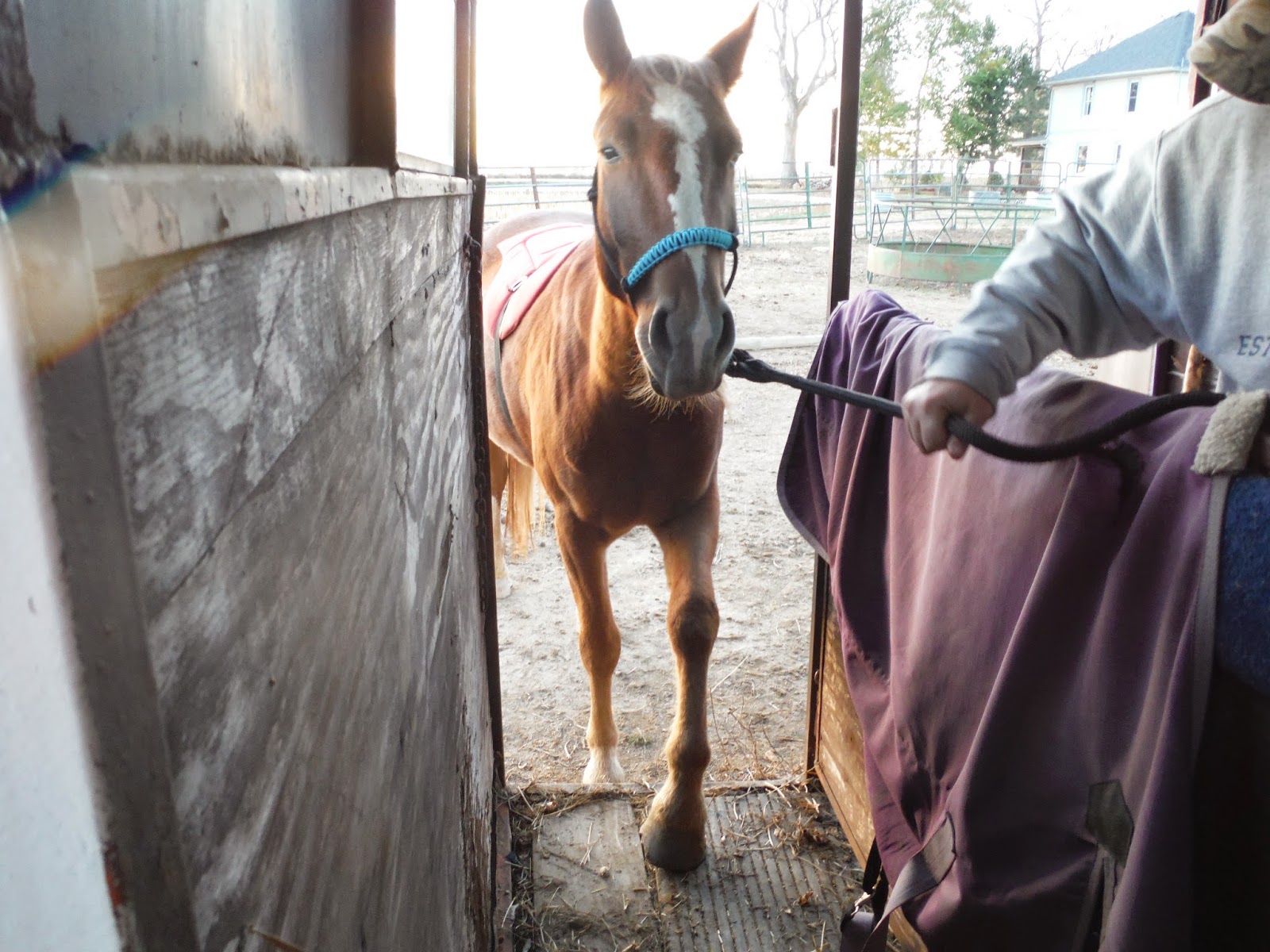 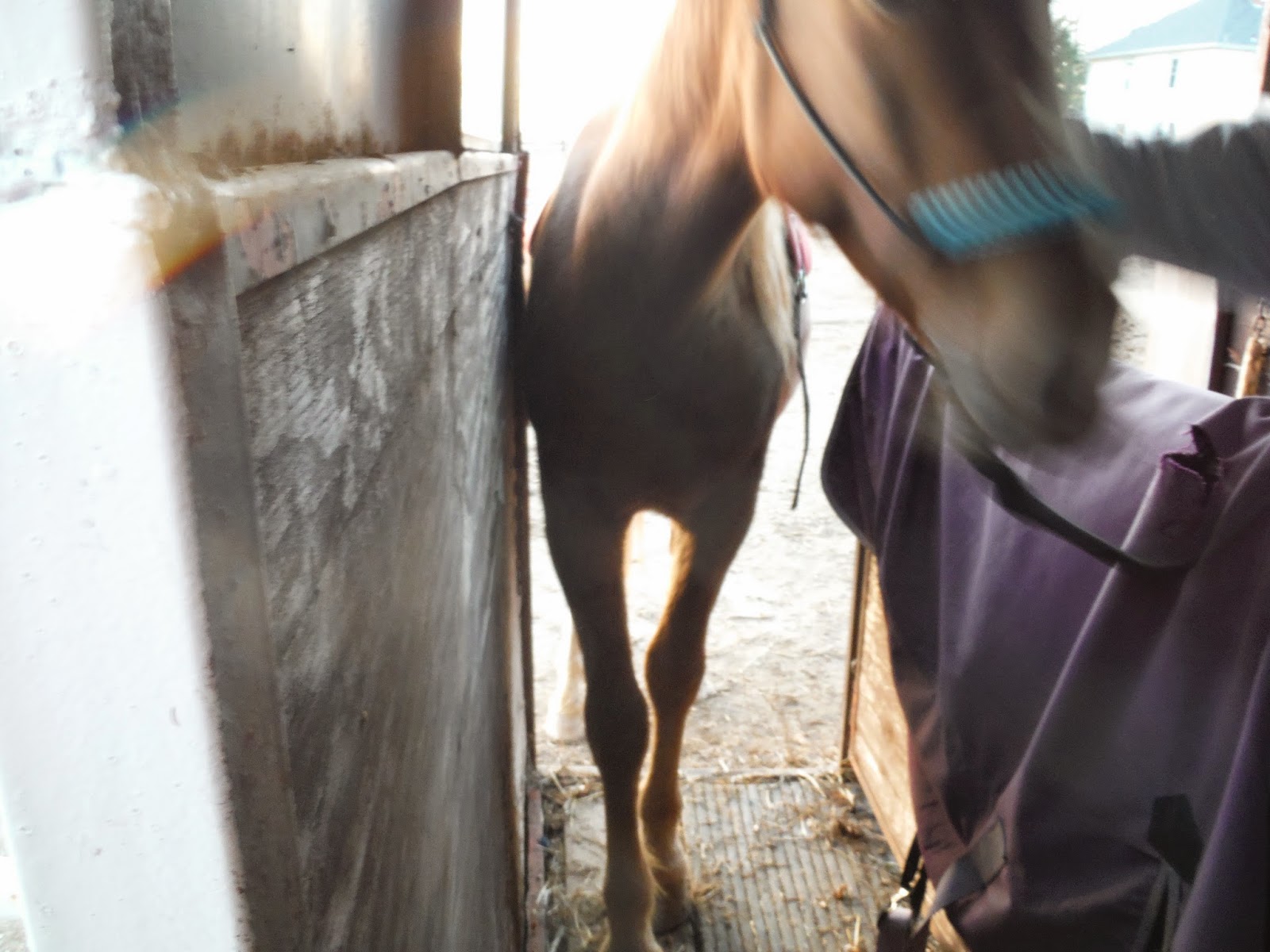 After they "loaded" into the trailer, it was time to start with the getting people on his back thing.  Copper's not big on having people be taller than him, so we've taken to standing on the black tub here and there while petting him.

On this day, though, he got the full Dead Indian treatment, first will Bill and then with Jay.

You should have seen how Jay lit up when he was telling me about this.  It's such a huge step for both of them.  In no time, he'll be sitting astride.
Posted by GunDiva at 8:26 PM 3 comments: