Back in the Saddle

Ever since Pearl bucked us off two years ago, neither Jay nor I have climbed back up on her. Mom, Bill, L.E., and Autobot have all ridden her, but we just hadn't gotten around to it. However, we bought her so we could use her and the intermittent riding she's been getting just wasn't cutting it. We have three solidly green broke horses who aren't progressing because we just don't have the time for them, so we decided to send Pearl off for some wet saddle blankets.

I'd been looking around for someone, but Jessica was full, as was our second pick, and the person Jessica recommended was far too expensive, so I kinda put it on the back burner and focused on getting Skeeter ready for the second half of Posse training (post on that will be in a few days).

We have lots of trainers who are Posse members, which means we have lots of different ideas on how to train horses. I never seriously considered sending any of my horses to any of the Posse trainers because I wasn't sure, with all of the different training philosophies, that I would choose one that would fit my own training beliefs. However, during Skeeter's last weekend training, one of the Posse members offered to take her from me when she was giving me fits. After watching her handle Skeeter, I decided that our training philosophies aligned enough that I would be comfortable sending a horse to her.

While the Posse member offered to take Skeeter, I preferred that she take Pearl. It was kind of a quick decision, because she's booked in July, but had an opening this month. I talked it over with Jay, we dug into savings, and off Pearl went to Wet Saddle Blankets Camp.

The first report from the trainer was that Pearl is "broke with all the fancy buttons". We knew that, but she needed to be "dumbed down" for us. She's a bit too well trained for what we need her for, and if someone asks for something wrong, she gets frustrated and threatens to blow up. The trainer's updates throughout the week were all positive, so I was feeling pretty confident (though nervous, let's not be crazy) on our way for my lesson (6/15/18).

She was a bit hot when the trainer stepped up on her, and in the past, I would have been all about riding her out. She wasn't malicious, just needed to move her feet. However, I've never had a horse so completely destroy my confidence like Pearl did when she bucked me off. Skeeter has never once offered a buck, but my lack of confidence because of Pearl has impacted my ability to relax and ride Skeeter. It was very important of me to get my ass back up on Pearl and remember that I do, in fact, know how to ride.

Pearl's 15 hands, easy, and my little 30" legs weren't going to mount from the ground, so when it was my turn, we went over and I mounted from the fence. All I could think of was how many different ways it could go wrong if she didn't like what was going on, but I slipped my leg over and shifted my weight from the fence to her back. She didn't even flinch. 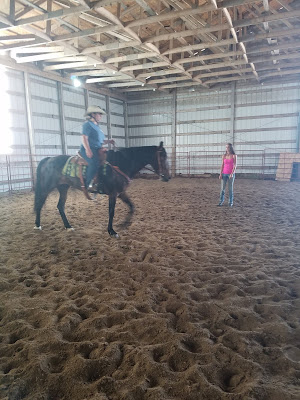 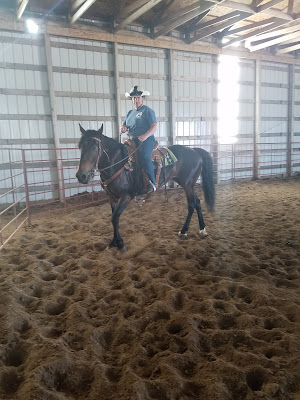 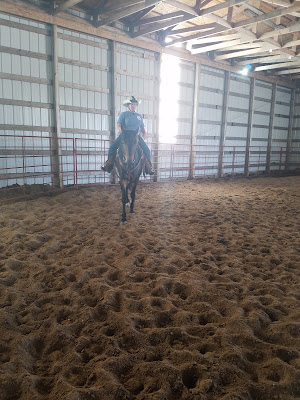 With the trainer coaching me, we rode circles in the round pen and practiced all the "fancy stuff" that I don't know how to do. She was solid, so we moved out of the round pen and into the arena. Once I was comfortable at the walk/trot, she took us back into the round pen for a bit of loping. Now, loping is not anything I'm comfortable with. We ride on the mountain and there just aren't any safe places to do much more than a trot. The trainer assured me that her lope was much smoother than her trot, which was good, because I could not find my seat on her big, Andalusian-style trot.

We worked on walk/trot, then I asked for a canter. It is nice and smooth, but I was only comfortable with a few strides before I brought her back down to a walk. Her transitions are nice and smooth between gaits, and she calmed down pretty okay.

She likes to go and would be an excellent endurance horse. When Copper came up lame, we were pretty certain that Jay's goal of riding and LD (limited distance) had died. Not true, now that we have Pearl. I think she'll thoroughly enjoy the training required for an LD, and we can set our goal for next fall.

Yesterday (6/19/18), I sent Autobot to the trainer's for a lesson on Pearl. Autobot's been doing some of the Pearl riding, though Pearl makes her nervous. Turns out, according to the trainer, Pearl just had her number. Now that Autobot has learned the "correct" (according to Pearl) buttons, and has learned to deal with Pearl's spooks and temper tantrums, she shouldn't have a problem at all riding her. I haven't talked to Autobot yet to see how she feels the lesson went, but I was encouraged by the trainer's report. Jay goes for his lesson on Friday (6/22/18), right before we bring our Disney Princess home.

The plan is to take her for a saddle fitting next week, so we can continue to ride her and not let her regress. I might even consider taking Miss Pearl to some Posse trainings to see how she'll do, but that won't be until August. I joined the Posse because Jay wanted to and talked me into it, but without Copper, he hasn't joined. Now that he's got a horse who might be suitable, maybe I can talk him into joining now.
Posted by GunDiva at 9:39 AM 3 comments: Links to this post