A Little Too Confident

Last spring, Bill and I went out for a ride in the forest and decided to break trail.  Estes enjoys being out on the trials, but she loves breaking trail.  It must take her back to her cattle gathering days, because she loves-loves-loves it.  And I love-love-love being on a horse who's enjoying herself.  We'd spent the majority of the ride being good little riders and staying on the trail, but on the way home we decided to take the more direct route - straight up and over the mountain.

Thanks to Meeker, I've learned to grab a handful of mane when climbing hills.  Everytime I wind my fingers into her mane it reminds me of Alec and the Black (yes, I grew up reading The Black Stallion and loving every word Walter Farley wrote).  As Estes and I headed up the mountain, me with handfuls of mane and her with fire in her eyes, her bounding legs ate up the hill and took us straight toward a couple of dead saplings.  In order to follow the path Bill and Ranger were making, we'd have to crash through a small stand of dead saplings, duck under a branch and pick our way through some deadfall.

No problem for Bill and Ranger, as Ranger doesn't like things to touch him, so he always manages to dodge trees, live and dead.  Estes, however, is a firm believer that if you want to go where she does, you'd better be able to stay on.

We rapidly approached the saplings, but being dead, they wouldn't be hard to break through.  Or at least I thought.  The sapling on my right hit my boot, but didn't snap off as it was supposed to, knocking my leg back before it finally broke.  That wouldn't have been a big deal except that our next obstacle involved ducking under a low-hanging branch and I had one of my legs completely out of position.

The branch came up and the only way to clear it was to lay forward over Estee's neck, so I did.  By the time we slowed to pick our way through the deadfall, I was laying on her back like freaking Superman flying between buildings.  Trying to readjust myself on her back while picking through the deadfall was interesting to say the least, but I managed just in time for us to clear the deadfall and resume our bounding up the hill in persuit of Bill and Ranger.
Posted by GunDiva at 12:43 PM 6 comments: Links to this post

March Schedule for Ride of the Week 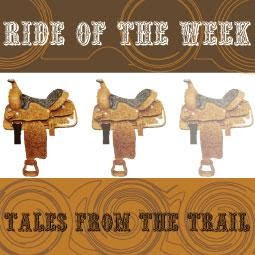 Yay!  I had a good response (better than I expected) and have every Wednesday in March scheduled for our Ride of the Week!  I've got the RockCrawlinChef working on a button for me; once that's done I'll put it and the schedule in the sidebar.  For now, here's what the schedule looks like:
I've got some other "feelers" out there, but if any of you would like to guest post, please email me at tel835@hotmail.com.
Posted by GunDiva at 6:00 AM No comments: Links to this post

I maybe should have put a little more thought into my plan, but everything had gone so well, I didn't give the walk to the pen a second thought.  Never mind that in order to get to the pen we'd have to cross the street, go through an open gate (that hadn't been there the year before), and walk behind the livery horses tied to the rail to get to our gate to the pen.  The "yard" where the dude rail is located is actually a dirt road that runs in front of the livery, so the gate must be open to public access - the livery can close the gate, but cannot lock it to impede public traffic.

Mom was walking to the pen alongside me and we were just chatting away.  We crossed the street without incident and reached the open gate.  The next thing I remember, Estes and I were nowhere near the gate.  Somehow, we'd ended up about thirty feet to the right of the gate, near the office and the guest entrance.  Estes was pretty worked up about something, but I couldn't figure out what at first, not that it mattered right then.  What I had to concentrate on was staying on top and keeping her from crashing through the office.  I consciously grabbed a handful of mane and started circling her until she slowed down.  I don't think her feet ever stopped moving, but she finally managed to stay in one place.

Once she was as calm as I was going to get her, I rode her back around and through the gate.  Going through the gate, I saw what had set her off.  Sometime during the day, the livery had put a flag up in the flag holder and it was "new".  Normally, "new's" not so bad, but "new" and snapping in the wind was not okay with Queen Estes.

It took me a while to calm down and realize that I'd managed to stay on during her little blow up, which consisted of bolting and spinning, but no bucking (Thank God).  Probably the only reason I managed was because I'd finally relaxed while on her back and wasn't tense.  Or it was luck.
Posted by GunDiva at 6:00 AM 5 comments: Links to this post

New Feature - Ride of the Week

I follow a lot of equi-blogs in many different disciplines, and though I only have a handful of followers, I can tell by my site statistics that I've got a lot more lurkers (or my followers can't get enough of my writing and read each post a hundred times).  I love reading different horse/ride stories and had a brilliant idea last night...what if I had a "Ride of the Week" featuring different bloggers?

So, in light of my brilliant, but not very original idea - after all, people have been doing guest blogs since blogging began - beginning in March I will host a different equi-blogger each week.  We'll keep the Ride of the Week going as long as people have stories they want to share.

Everyone who has ridden or spent any time around horses has a story to tell, so tell it.  You don't have to be a horse owner or expert; I just love reading about other people's experiences and memories of my favorite critter on earth and I'm sure other people do too.  If you are interested in guest blogging, please email me at tel835@hotmail.com and put "Ride of the Week" in the subject line.

That day had been spa day for the horses, so Mom and I spent a good deal of time washing and grooming.  The horses were looking good, so sleek and shiny and purty.  After the horses got their spa day, I decided I wanted to go for a short ride and maybe tackle a little more challenging hill than the hill on the Ski Road loop.

For some reason, Mom decided not to ride, but to walk while I rode.  I hopped up on Meeker and away we went looking for a short trail.  I knew that I was not ready to tackle the switchback to the trails in the forest, so we wondered around town.  Finally, Mom lead us to a trail that fit the bill.  It was a short loop with a short downhill and uphill section.

We made it down the hill without any incidents, stepped across a small creek and headed up the hill.  Mom was walking behind us.  Meeker decided that it wasn't nearly as much fun to walk up the hill as it would be to lunge up the hill.  After the first lunging step, I realized that maybe it wasn't the best idea to get on her when she looked so sleek, shiny and purty.  By the time I grabbed a handful of mane, Meeker was almost out from under me and I was afraid I was going to end up sliding off of her back and landing on my mom.  Two more lunging strides and we crested the hill.

I learned two important lessons that day: 1) maybe a sleek and shiny and purty horse isn't all its cracked up to be and 2) the mane is my friend.
Posted by GunDiva at 4:04 PM 1 comment: Links to this post

Once we were comfortable riding at a walk on flat land, we increased our distance and began to incorporate small hills.  In order to meet our goal of riding the one-hour loop across the street in the forest, we'd have to be able to climb and descend hills while staying on our horses.  We added in the Ski Road loop, which included not only gradual climbs and descents, but scary things like traffic and barking dogs.

...And My All-Time Favorite Picture 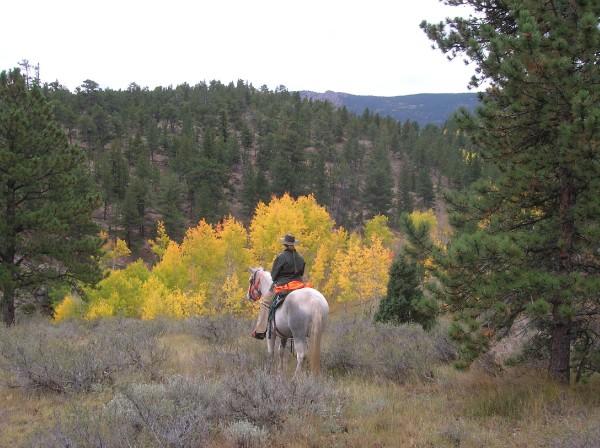 Posted by GunDiva at 6:00 AM 3 comments: Links to this post 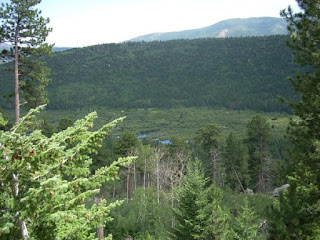 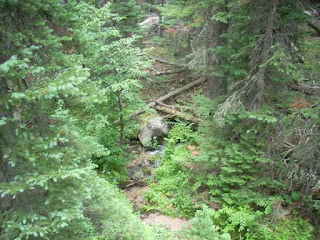 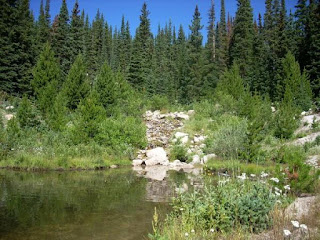 The inlet on the west side of the lake 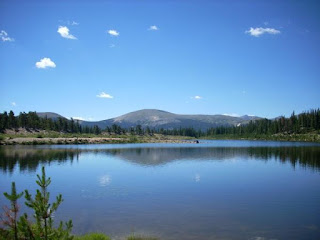 Looking south across the lake 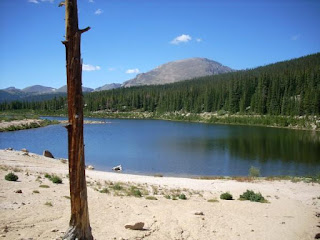 My favorite picture of the lake.  I just love the lone tree in the foreground.
Posted by GunDiva at 6:00 AM 3 comments: Links to this post

More Of My Favorites 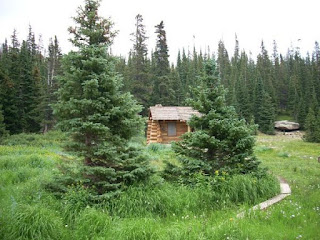 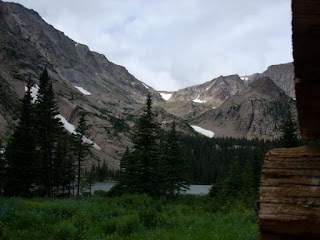 View from porch of Ranger's cabin 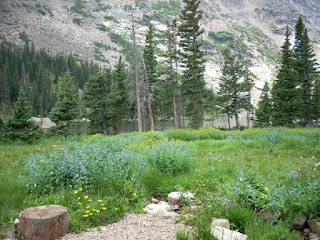 Walking path to lake from cabin 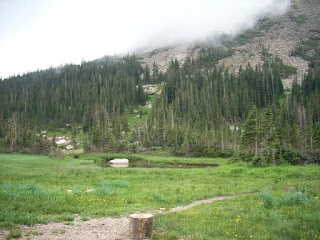 Small pond to the east of the lake 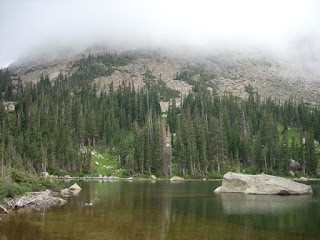 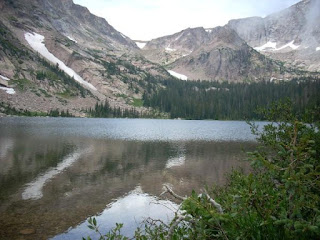 I love this reflection picture!
Posted by GunDiva at 6:00 AM 3 comments: Links to this post

Some Of My Favorite Views

Since I started this blog in August of last year, I've been talking about the areas I regularly ride in.  One of the things that I never left the livery without was my camera and extra batteries.  Today, I was going through some of my pictures, looking for a new header picture and found a whole slew of pictures that I thought I'd share.  I'm lucky to live in what I'm pretty sure is the most beautiful place in Colorado.  I hope you enjoy them. 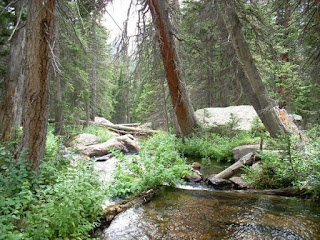 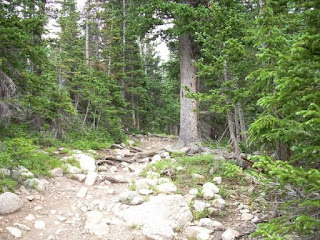 Part of the Wild Basin Trail feels like an Enchanted Forest 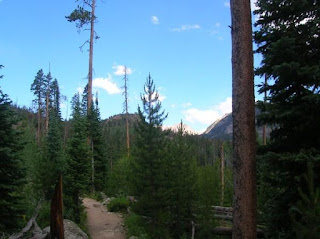 Burn area on the way to Thunder Lake 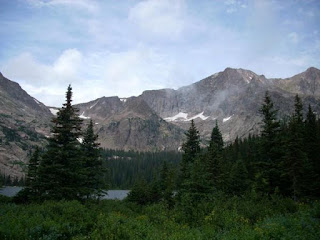 Before a storm at Thunder Lake 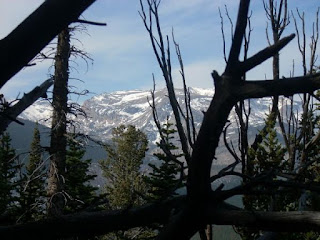 View on the way to Finch Lake 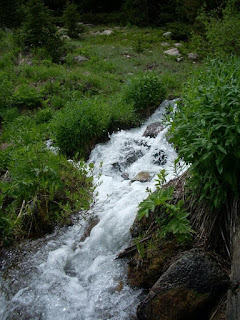 Runoff at Indian Peaks
Posted by GunDiva at 12:20 PM 6 comments: Links to this post