Bill found a cheap kiddie pool for Skeeter and picked it up.  Mom dropped it off yesterday, so when I got home from work, I decided to torture play with Skeeter.  Keeping in mind that I have to let go of having a lesson plan and just have fun, I put it on my head as I walked from the car to her pen.  I tried to be as big and scary as I could to get a reaction out of her.

Instead, I got a "hey, Mom" whinny as she trotted up to the fence.  I banged the swimming pool around a bit, balanced it on the fence, and just slid it from my head to hers.  She thought it was a bit weird, but didn't have too many issues.

When I was sure she wasn't going to kick the hell out of it, I took it into the pen with me and put it back on my head.  I offered to put it on her head and she wasn't entirely sure she wanted it there, but let me slide the edge up her nose and over her ears so that we were both wearing the pool. 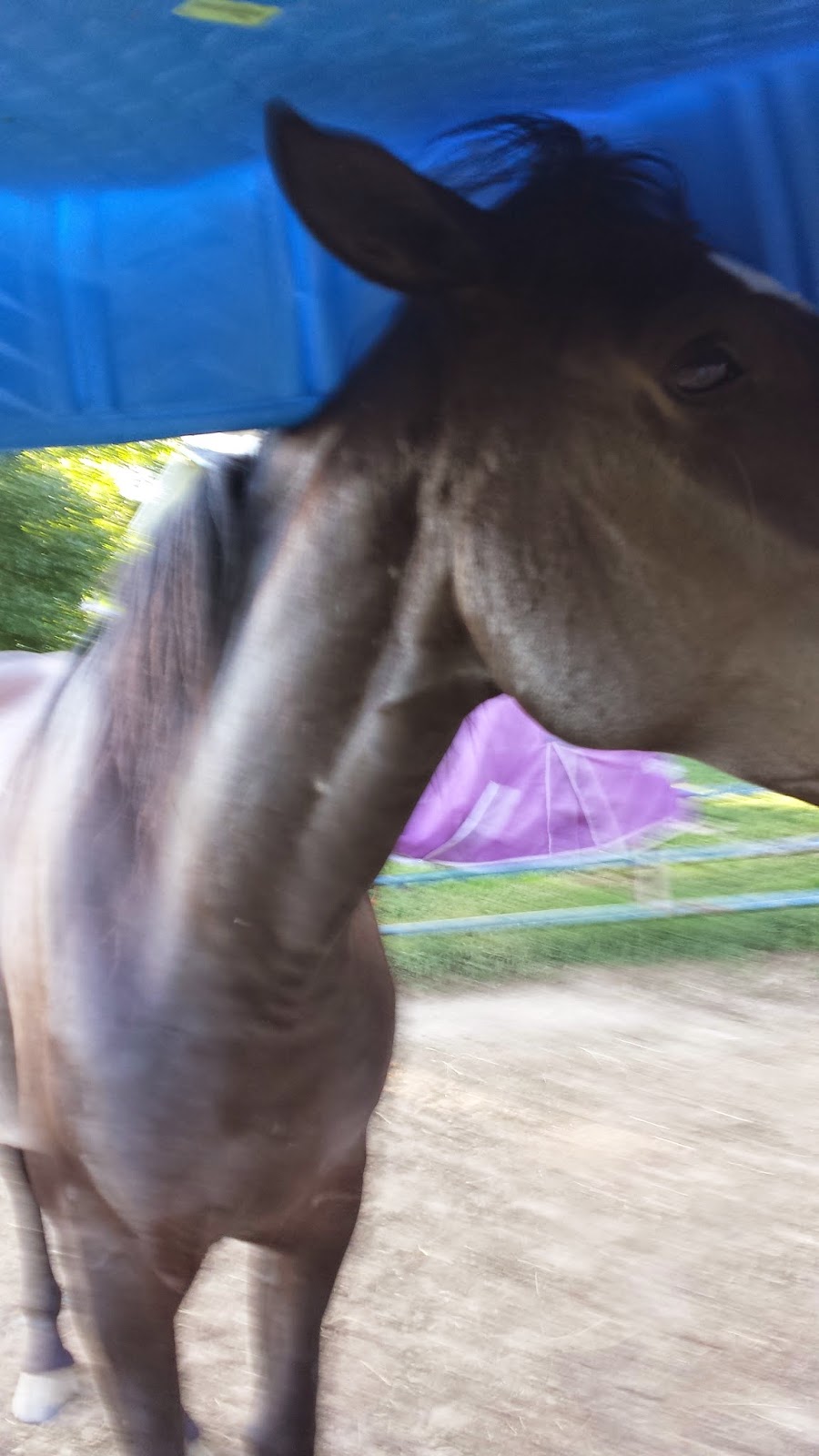 She allowed me to put the pool on our heads a couple of times before she was done, so I rolled it around on its side for a bit and let her lip at it. 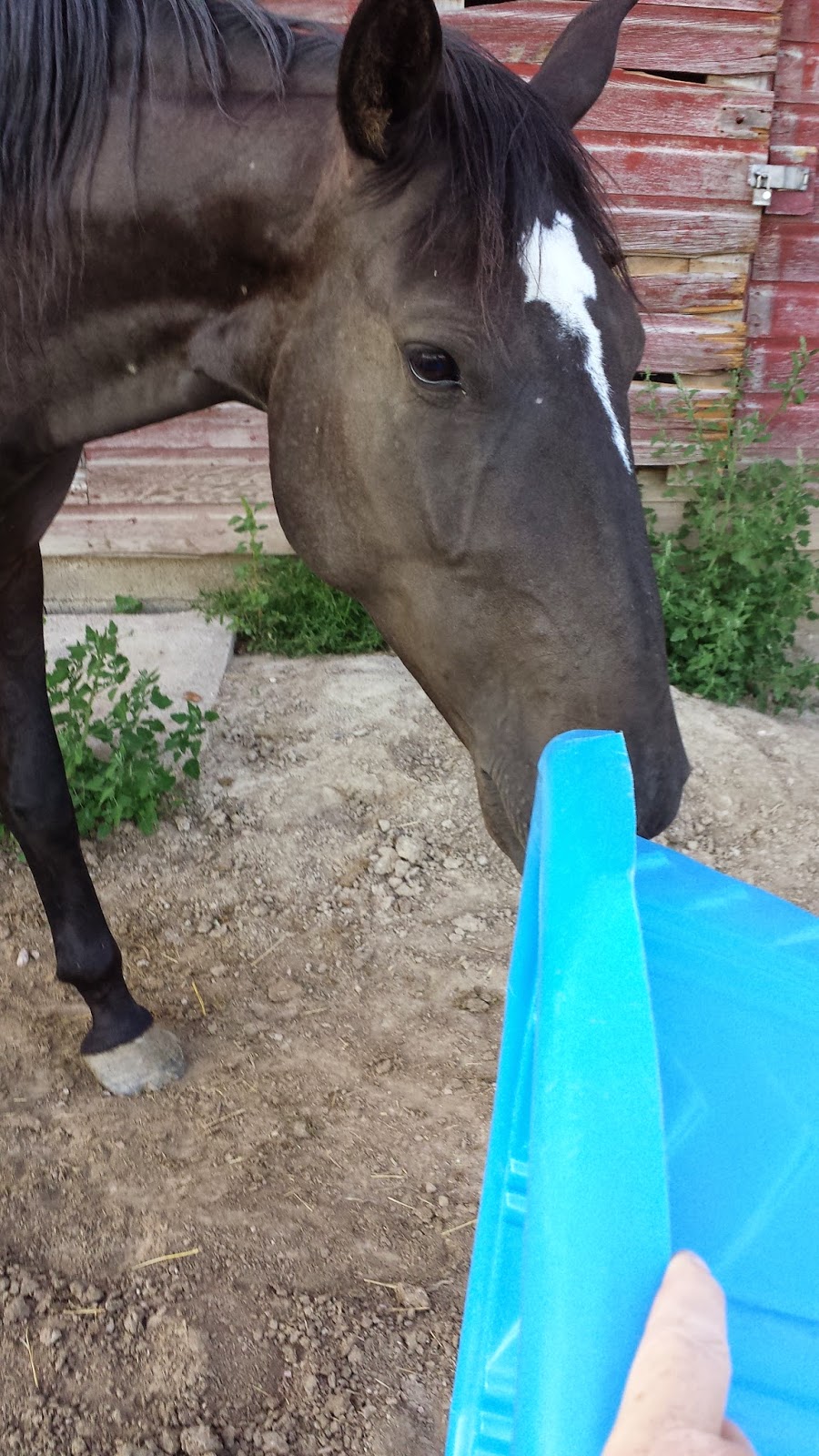 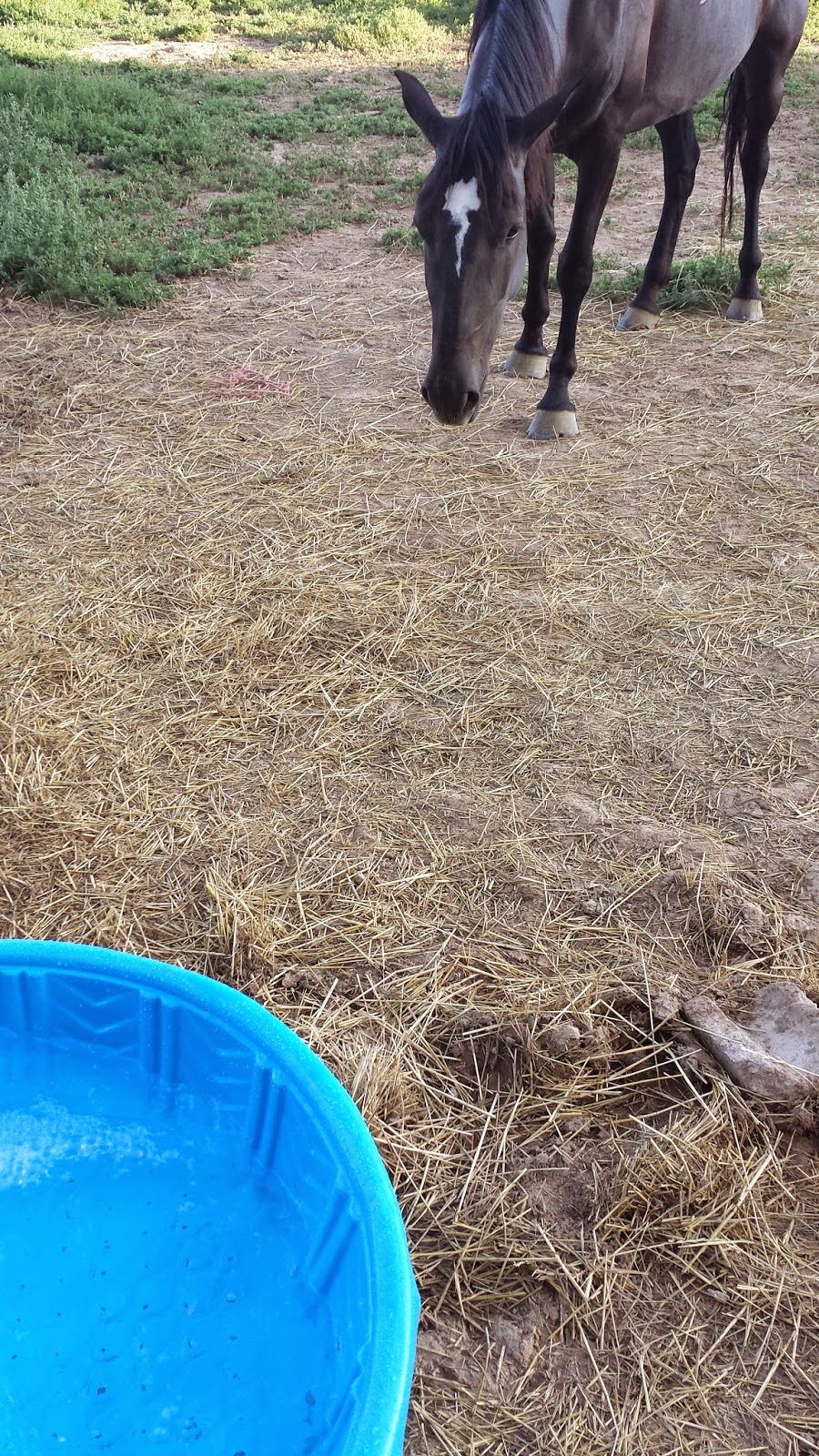 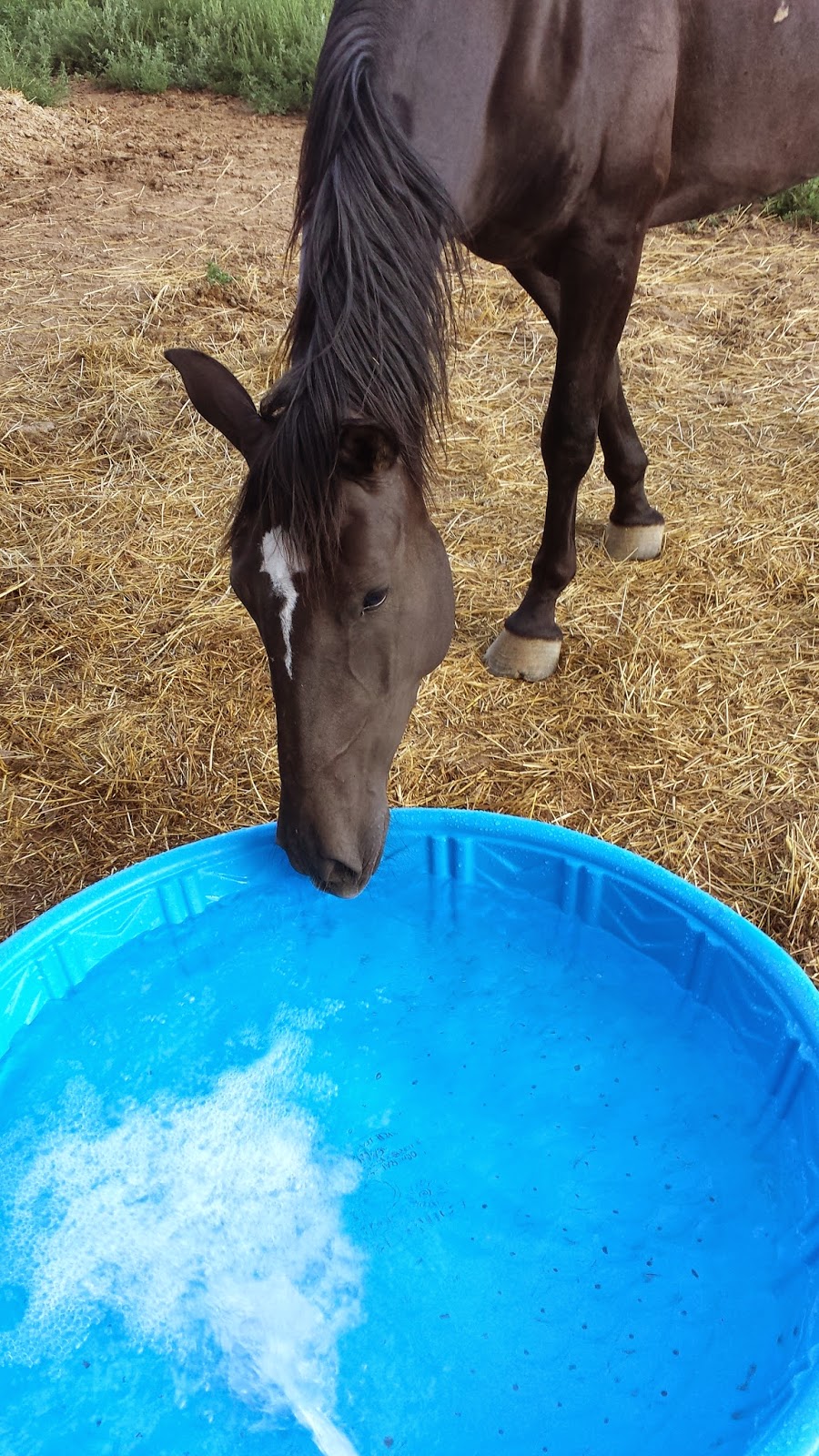 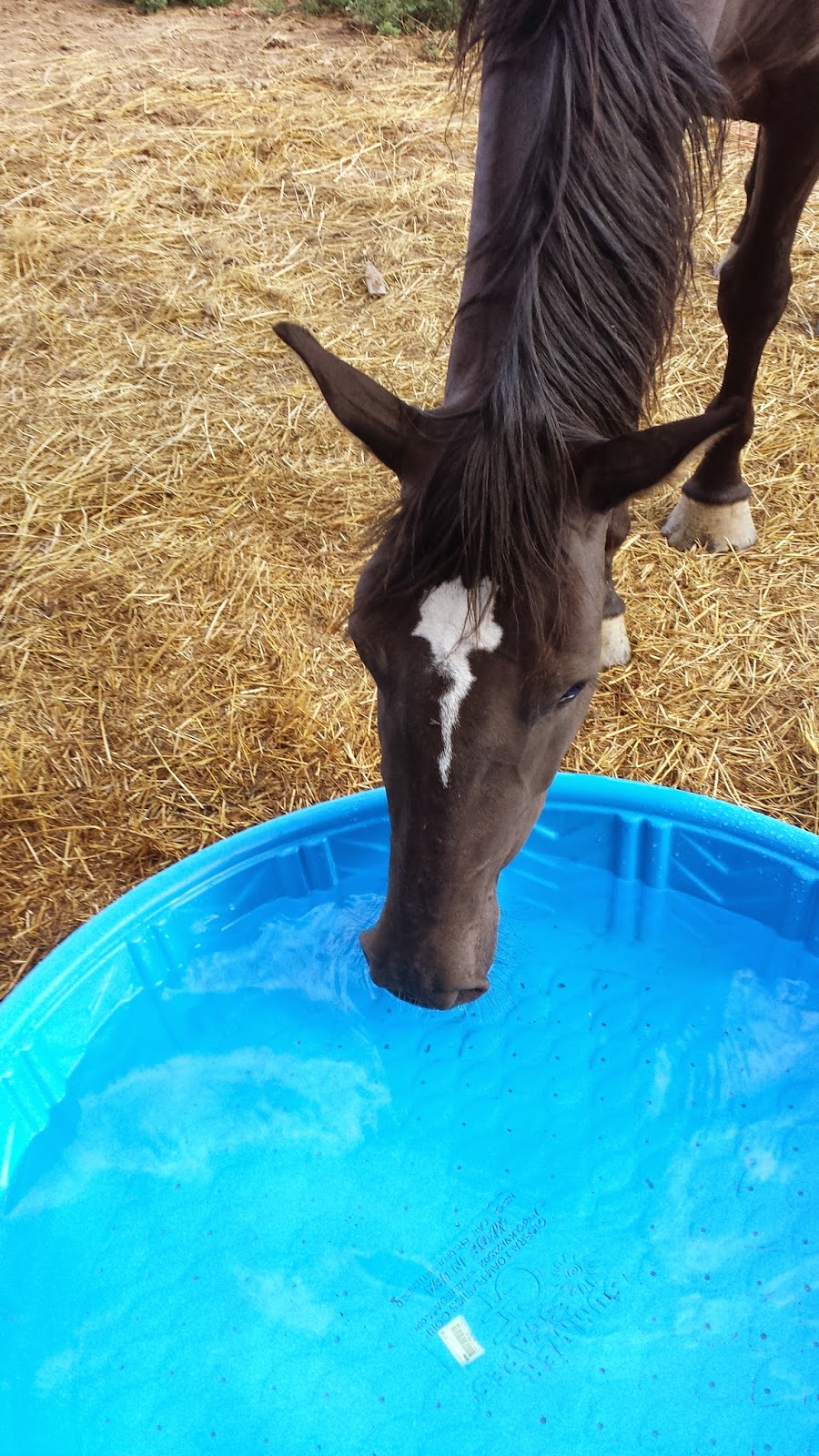 She had a couple of big drinks out of it and then pawed it.  I'm not sure what made her jump more, the feeling of water up over her hoof or the big clump of water that splashed on her belly, but that was all she wrote.

I spent a few minutes trying to convince her to come back to the pool, that it was just water, but she was having none of it until Allie-bird started drinking out of Skeeter's pool. 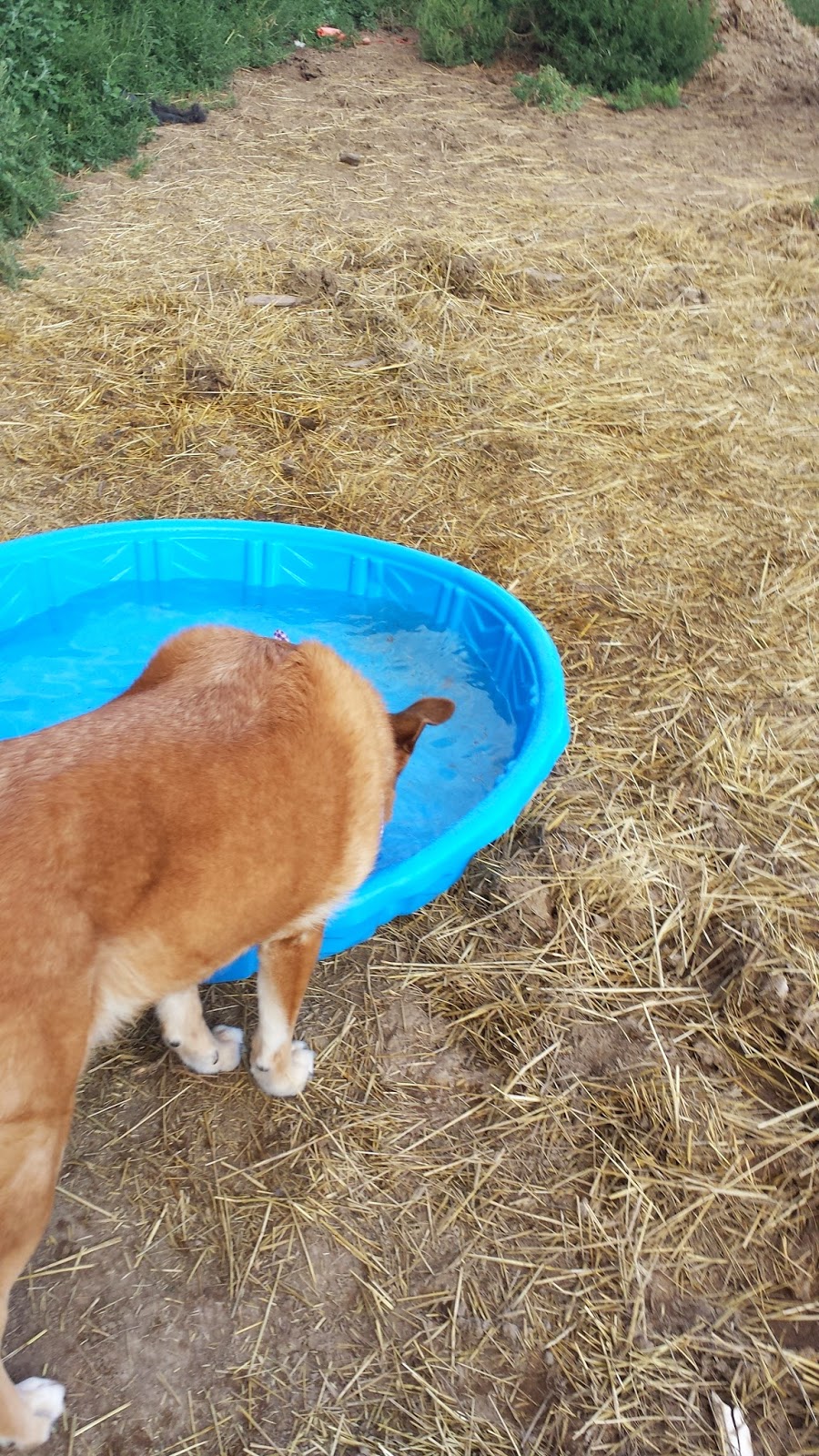 Suddenly, the pool wasn't so scary any more and Skeeter came back to drink out of it and remind her canine sister that it was her pool.  Jay and I spent a good bit of time trying to coax Skeeter to walk through the water.  It was a no-go.

Jay and Allie went back into the house and I grabbed a bribe from the tack room and set about trying to get Skeeter to at least put one hoof in the water.  After twenty minutes, the best I could do was get her to lift her hoof and touch the edge of the pool, so we called it a day.

I ordered a clicker-training book a couple of days ago, so I think we'll work on using that to train hoof placement.  I also have a much bigger, blow-up swimming pool that will be more difficult for her to step around or over.

I'm feeling pretty good about my choice to train her to cross water.  Despite being wild-born, she has spent the last three and a half years of her life in a BLM holding pen, where there wasn't any running (or even standing) water for her to play in.

(In roughly seven hours we leave to go to the prison for Jay to be chosen by a mustang!  Wish us luck that the perfect horse will chose him.)
Posted by GunDiva at 10:06 PM

It all seems like so much fun! She is such a character.
I thought about you guys yesterday. I can't wait to hear more about the day.