A few weeks ago, I wrote about our less-than-stellar ride in which Skeeter caused Alloy to dump Beel.

With Beel being sidelined, Mom and I planned on doing a lot of work with Skeeter on my next trip up the mountain (8/19/19). We've tried everything in my tool box to get her moving once she gets stuck, so the next thing we had (besides spurs or a crop) was to wait her out, and wait for her to get bored if nothing else worked.

She was a rock star getting tacked up, but getting that right front boot on was an issue. I'd run my hand down her leg and tell her "foot" and she'd bump me on the butt with her nose. It's a dance we've been doing forever. I off-hand mentioned to Mom that I wondered if something hurts, because Skeets does a lot to avoid picking up her foot. She backs up, leans her weight on me, shifts away, you name it. When we started thinking about it, that's the foot she always gives the farrier problems with. She reared up to get away from Mom's farrier, and tried to do the same with mine. She'll pull back and sit her ass on the ground before giving up her foot some times. Why it took us so long to think of pain rather than her just being a mare is beyond me.

It just so happened that as I'm wondering aloud about pain that Mom was looking at Skeeter. When I asked Skeets to pick up her foot, Mom noticed that her whole face went tight and agreed that maybe it hurt. Usually, when she refuses to pick up that foot, I send her out on a circle for a few laps and then she gives her hoof easily. This time, though, I decided to massage her shoulder to see if I could get it to loosen up. I am not a massage therapist by any means, but since Queen Estes had some arthritis issues in her shoulders, I had a general idea of what/where to massage. I spent just a couple of minutes digging my fists into her shoulder, massaging areas that felt tight. When I felt her relax, I asked for her foot again and she lifted it without a problem.

After we got her boot on, it was time to head out on the ride. We made it out of the parking lot, headed up toward the Post Office and she stalled out. Mom and I had swapped reins, so I was back to 9' reins. After I'd exhausted all other options, I popped her on the ass with the end of the rein. That earned me a cow kick, but we started moving again. She moved out, but I was very conscious of her speed and drove her forward with my hips. I've never had to push a horse with my hips, but the whole "shoulders of a queen, hips of a whore" thing came to mind. I'm used to pointing a horse in the right direction and having them go, so having to drive her forward with my hips quickly got tiring. 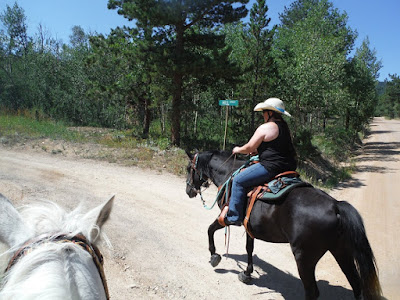 I'd just started to relax when we crested a hill and a dog started barking at us. We couldn't see the dog, who was fenced behind a tall privacy fence. Skeeter didn't spook, but did stop to look at the dog and give it the stink eye. But ... we stopped. Ugh. I finally got her moving when a car came along. We stepped off the road onto the grass and she moved a bit for me until we had to cross a driveway, then it was back to emptying the tool box to get her moving. After I'd asked a few times, I lifted the end of the rein to pop her butt, and she lifted a rear foot to cow kick again, like "really, Mom, we're going to do this?" I wiggled the rein, she sighed and moved on. Thought she could psych me out, but it didn't work.

I could keep her moving if I allowed her to walk up on the grass, off of the road, and I continued to drive her with my hips. Once we'd descended the hill and turned on Ski Road, she decided she could go and didn't hesitate the rest of the ride. We even trotted for a bit without an argument. 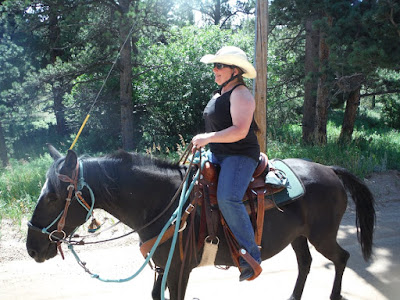 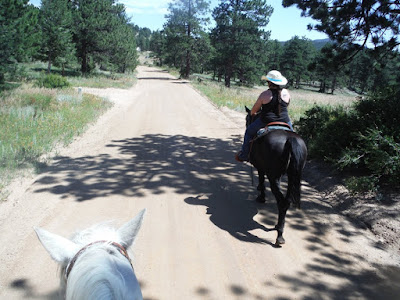 As we got nearer the lodge, I could feel her get antsy to get home, so Mom and I took an indirect route home, turning her away from the lodge and making her go around the block instead of riding right up to the hitch rail. When she stopped at the turn, I knew it was a baby temper tantrum, nothing else, and just lifted the end of the rein. 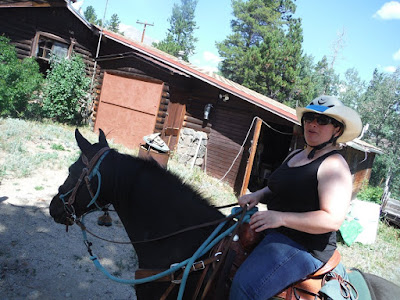 Overall, the ride went well. She's gotten used to me getting off and walking when we're out with Bill and Alloy, but I refused to do that for this ride. Mom and I discussed that maybe it's her shoulder that's causing her to stop, and I was pretty sure that it was her shoulder.

Mom and Bill each took turns taking her out for the next week, and agree that there's something going on with her right shoulder that's causing her to stop. She'll stop, rest, shift her weight back and forth, and then move one when she's comfortable again. Once she's warmed up, she'll go and go, but until then, she's pretty uncomfortable.

Skeeter's a really good horse, she truly is. We've had (and will continue to have) our fair share of disagreements, but she's just a great horse with an amazing heart.

Now that we know she's not just being a mare, that there is something going on with her, Mom and Bill brought her home to me yesterday. My neighbor has a chiropractor that works on her school horses every month, so I've put Skeeter on her schedule for the next time she's out. Hopefully the chiropractor can figure it out and get her feeling better. If not, I'll schedule our vet to come take a look at her.

I'm pretty sad that our mountain riding season ended earlier than I wanted it to, but Miss Skeeter needs to get her shoulder fixed. Until we're riding again, she's getting to go on walks with me, just like her brother. She's not super excited about the walks, but he wasn't either when we first started. Now he asks to go.

Horses are rarely just "being a bitch" as one person I know says. They always have a reason for their behaviour and we don't always know how to listen to them. Good on you for finding the root cause of her issue- and for not letting her take advantage of you.