When I last posted, Mom and Bill had brought Skeeter home off the mountain so we could have her looked at by a chiropractor. We didn't do any riding while waiting on our appointment, but I did start taking her for walks like I did with Copper. 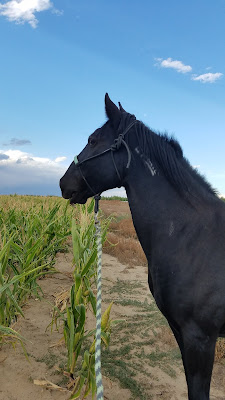 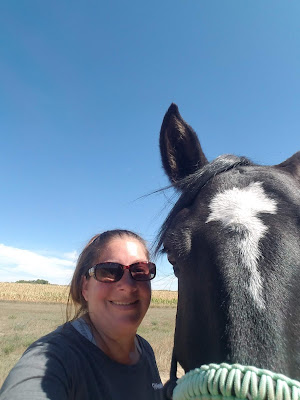 She's a pain in the ass on the ground. There were two things I swore my horse would never do: 1) be pushy on the ground, and 2) be food motivated. Guess what I got with Skeeter? Yep, both of them. I think it's going to be a life-long battle with her. Anyway, that's got nothing to do with this post.

Because I thought her shoulder was jacked up, I didn't want to do any riding until she was adjusted. I am a bad horse mom, because I don't have the date she was finally adjusted, but it had to be in the last part of October after I started my new job. So, she went for walks with me (and we had fights every time), but didn't get ridden. L.E. was kind enough to do the chiropractor appointment with me since I had just started my new job, and it turns out it wasn't Skeeter's right shoulder that was the problem, it was her neck. C7 was way, way out.

I don't know how long her neck had been out, but it had to have been months (possibly longer than a year) considering we'd been having issues with her right shoulder for the entire season. After her adjustment she was a different horse - her eyes got much softer and she just in general was less mare-y. I was struck by exactly how amazing Skeeter is - she'd been in pain for God knows how long and was never mean about it. She tried telling us she was hurt, but I was way too slow in picking up on it. I felt horrible for all of the frustration I'd felt over the summer, because she was just giving and giving and I was too blind to see it. She did everything I asked of her unless she couldn't do it, and even then she tried. When she couldn't do it, she didn't get nasty about it, either, she just refused. What an amazing heart my mare has.

Despite getting her adjusted in October, I didn't get to ride her until yesterday (1/5/20). Weather, jobs, etc. all got in the way, but yesterday everything lined up perfectly and we were able to do an easy ride at the neighbor's.

I think she was happy to get to do something. Because I hadn't had an actual ride on her since August 18, I did a tiny bit of circle work with her in the arena, just to see where her head was. It was completely unnecessary - she was ready to be ridden after four and a half months off.

I didn't have any plans in mind, other than just to get on and poke around. Last year, L.E. and I rode a lot over Christmas break and I really missed it, so when L.E. invited me I jumped at the chance.

It was a nice, low-key stroll around the arena. We have a few things to work through. For example, for an entire season, if Skeets stopped, I eventually got down because I didn't want to hold anyone up, or hurt her. So she tried stopping and parking herself several times yesterday. The joke was on her, I was in no hurry and I know she's not in pain, so I just waited her out. 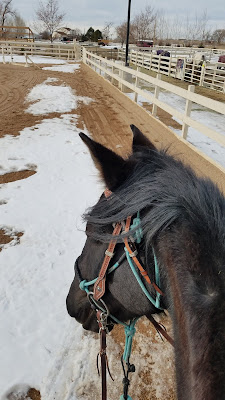 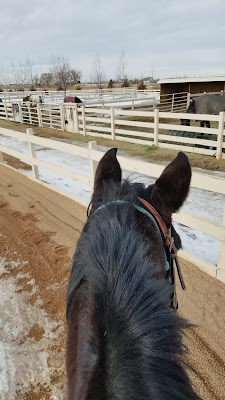 In the past, I always had a case of the nerves getting up on her. Pearl did a job on my confidence as I've mentioned before. However, taking a tumble off of Skeeter last summer did wonders for my confidence. I have zero nerves about climbing up on her anymore, no matter how long it's been. Who would have thought that falling off a horse would help my confidence?

Now it's back to working for a living, but I hope to get to climb up on my incredible mare on a more regular basis.
Posted by GunDiva at 9:41 PM

How absolutely amazing! I'm so happy for you. Happy riding!