Earlier this week, I went up the hill for our weekly riding date. I wasn't in any hurry, and for once Mom and Bill didn't have to rush to get back for check-in, so I was feeling pretty Zen. The mountains always do wonders for my mood, and I was starting off in a pretty good mood to begin with. I was looking forward to an amazing ride on my amazing horse.

When I went into the pen to grab her, she and Alloy were down by the creek getting some water. It was so pretty, I just had to take a picture. 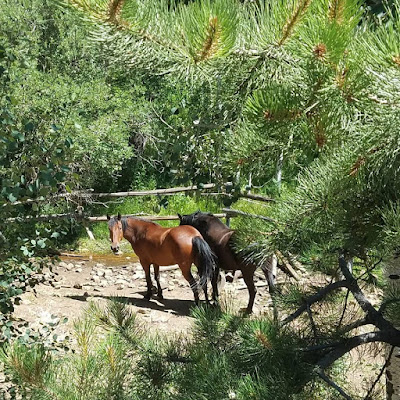 Skeeter saw me coming and decided she needed to drink the creek dry before she was caught. No big deal, we weren't under any time crunch and I was in a fantastic mood. I didn't even much care that she walked away when I went up to her, she just went to the top of the hill where I normally catch her.

She stood at the hitch rail like a pro while I groomed, fly sprayed, and tacked her up. A gentleman wandering by stopped to chat and she was happy to be a perfect Mustang Ambassador. She didn't even give me much trouble putting her boots on.

It's always fairly easy to get her left boot on, but her right one is always troublesome. No big deal, I was in a fantastic mood, so it didn't bother me to have to put her on a circle for a couple of laps. As soon as we got back to the hitch rail, she gave me her right foot and the boot went on.

I led her across the street and up the hill with Bill leading out and Mom riding drag. At the base of the switchback, she stopped cold, but move up when I drove her forward with the lead rope. I led her up the upper trail, rather than the switchback and she walked right up it without a problem. My thought is that we'll spend the rest of the riding season walking her up the upper trail so that she can build not-traumatic memories of that and hopefully override the bad memories of the switchback.

Alloy was being his normal impatient self, so Bill was riding him out and back, out and back, while Skeeter and I trudged along to a place where I could mount up. I was wearing an old, comfortable pair of jeans that are just a touch too big. Like, barely too big. Unfortunately, when I went to mount up, the bottom of the leg of my pants got caught on the back of my boot and I ripped my pants in the crotch. But, you know what? It was okay, because I was in a fantastic mood.

I got settled in and gave Skeeter a little nudge to move. Huh. She didn't move. So I clicked and kicked again. Nothing. It was at this point that my fantastic mood began to deteriorate, and I knew she and I would be fighting for the entire ride. When she puts her stubborn pants on and plants herself, there's not a lot to be done.

Now, last week, when she got tired and stopped, I dismounted and led her a ways, but that wasn't going to happen this time. I'd just gotten on for freak's sake! Meanwhile, Bill and Alloy are riding out and back, out and back. Once Alloy gets moving, he has to keep moving or he gets all "ants in his pants" and starts thinking about bucking.

A couple of hard kicks and a threat with the end of the reins later, Skeeter sighed and took about ten steps before stopping again. Lather, rinse, repeat, for half a mile. At one point, I asked Mom to move up ahead of us, hoping Skeets would just follow. Washoe was very patient, and Alloy was getting lots of exercise riding out and back, out and back. 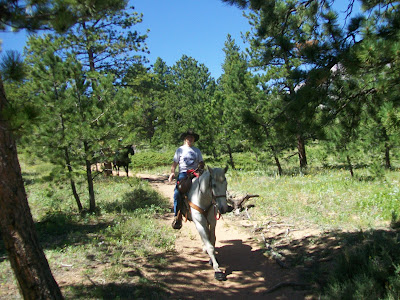 I had, about the third time she stopped for no reason, reached my boiling point. I was so angry, my fists were clenched and I was saying not very nice words. I had decided to tell Bill to turn on the upper rubber strip trail so we could just do the short one-hour ride and head back, when he and Alloy made the turn without me saying anything. I breathed a sigh of relief.

Skeeter made the turn nicely and walked about 25 yards before she came to a dead stop. Again. I picked up my rein and smacked her hard right on the shoulder to get her moving. Since she stepped on my 9' reins a few weeks ago, I've been riding in my 7' ones and they're too short to smack her on the ass without pulling on her mouth, so the shoulder it was.

She must have realized she'd done effed up this time and jumped sideways into a small tree and some dead fall.

Unfortunately, she jumped and crashed right as Bill and Alloy were headed back toward us. Alloy heard the smack and saw Skeeter jump, so bad, bad things had to have been happening. Of course, his first reaction is to buck. The picture is the last one Bill took right before he went ass over tea kettle.

Bill hit the ground, Skeeter came to a dead stop, and Alloy took about three running strides before sauntering off. I dismounted to check on Bill, who had the wind knocked out of him, while Mom and Washoe went after Alloy.

Once Bill could breathe again, we hiked up the mountain to meet Mom and Washoe with Alloy. Bill remounted to ride out, and Mom encouraged me to remount, but I refused. Alloy's frustration was also at a boiling point because of Skeeter's refusal to move and I didn't want to add any more frustration and cause another wreck.

Yes, it would have been best for me to remount and force Skeeter to carry me out, but it was not in the best interest of Bill and Alloy, so I hiked out. Not the first time it's happened, won't be the last, I'm sure.

I told Mom that once we got back to the lodge, we were going to drop Bill and Alloy off and I was going to mount back up and ride at least around the block. Not the best solution, but a decent compromise, I felt.

Skeeter was Not Pleased when we got back to the lodge and I mounted up. Mom and Washoe rode along with us for support. Skeets and I had a big ole fight about leaving the parking lot and another big ole fight in the neighbor's front yard, but we finally got moving and stayed moving. We only rode about two blocks, and on the way back, we kind of zig-zagged through parking lots and such, taking the indirect way home so she couldn't bolt back to the hitch rail.

For the first time EVER, I considered getting spurs. I don't ride in them, because I've never been trained to and I've ridden horses who have been ruined by people wearing spurs who have no business doing so. But... I seriously considered making an exception. Instead, I'm going to strip the horn bag off my saddle so I can get a good over-under with the rein if necessary. Also, a riding crop may be in her future if she doesn't straighten the eff up.

The next time we go out, it will probably just be me and Mom since Bill's on injured reserve, and we will have all the time in the world for our battle royale. Of course, since we'll have time to fight it out, she won't give me any problems at all.

My trail mare stopped times when she smelled something dead or a predator.Spurs did not help, she stood until she decided it was safe. I wore the english spur and used a quirt. What worked best for me was after talking to my vet was changing into a hackamore. Problem solved.She was comfortable and more willing to listen to me lead. Turns out as a mare ages her face changes. She was willing just not comfortable.

I had a mare who used to take care of me that way. I miss her.

It would be interesting to figure out what is going on in that mind of hers! You probably can't circle her on the trail, but when a horse freezes up I try to get them to turn their head and take a step sideways, my thinking being that it is safer to have their head and move their hip than to go straight forward. But horses all have their own evasions- Beamer used to stop like that and then he would back up, which cam be very scary if there is a cliff on the edge of the trail!
Gussie this year is refusing to go forward in the river, so I grab a willow branch just before we get there and use that as a motivator. If you aren't used to using spurs and your horse isn't accustomed to them it might be a bad idea and just make her mad, unless you are going to practice in an arena for a while and get her to understand that new feel. I think a quirt or one of those over/unders that barrel racers use might be your best bet.
Hope you can get it resolved and get back to enjoying your mare!