The horses need it and we were getting low, so we did a quick CraigsList search and found some small bales reasonably priced at $6.00/bale.  We figured that 100 bales would get us through to the first cutting this year, plus that's all we could afford.

Jay had to work the only day that the sellers were available, so I had to call in reinforcements.  Well, reinforcement.  Okay, I called Beel.  Jay's truck's transmission isn't so hot and I didn't want to risk taking it, so I asked Beel to bring his truck down and I borrowed a flatbed trailer from a friend of mine.

I maybe should have known that all was not going to go smoothly when Bill called from the interstate and told me he was still a half hour out.  No big deal, I texted the sellers and told them that we were running a bit late.

When Bill got to the house and we tried to hook up the trailer, it didn't like Jay's ball hitch, so we switched to Bill's and finally got it to work with some cussing and persuader tools.  An hour later than we anticipated, we were off!

Now, both Bill and I have a nasty cold, so we're not working to our fullest potential and we hoped that the sellers would be able to help us load.  Turns out, it was mostly just Beel and me to load.  The seller was kind enough to back the truck and trailer down his driveway, around the house, and into the barn where the hay was (Thank God, or we'd still be there trying to negotiate his driveway).

The trailer is a big, good sized one, so we thought we could get all 100 bales onto it.  About three-quarters of the way through loading the trailer, we realized there was no way we could do it.  Stacking the bales four high was as high as we were willing to go.  We decided to move twenty bales off the trailer and onto the truck.  At this point, the seller's wife came to help us, so we could form a hay brigade.  (The seller has a wrist injury and can't lift bales).  I stood on the tongue of the trailer and took the bales Bill handed down to me, then handed them off to the seller's wife, who was kind enough to stack them on the truck.

An hour after we started loading the first bale, we put the last bale on the trailer and started to strap them down.  Only, we could only find three of the five straps that Bill usually keeps in the truck.  We needed all three straps for the trailer and didn't have any for the truck, so Bill figured a way to tie down the bales on the truck with baling twine (amazing stuff, isn't it?) and off we went.

I started firing off texts to my sibs and kids letting them know that we were running late and if they still were going to come help us unload and stack, it would be closer to six.  We were now two hours behind schedule.

I started calling my sibs and kids again, trying to find out who was already at my house and who could bring Jay's truck to me, bad transmission be damned.  Just as I was talking Digger into bringing me the truck, Bill said he thought we could make it if we moved more hay off of the trailer and onto the truck, so I told Digger to standby and we started handling they hay for the third time, this time on the side of the road.  Since we didn't have an extra set of hands, I pulled the bales from the trailer and lowered them to the ground, where Bill picked them up and stacked them on the truck.  Thankfully, he's tall.

Remember, I said earlier that we didn't have straps for the bales on the truck?  I wasn't entirely sure how on earth we were going to secure the bales we moved from the trailer to the truck, but Bill dug around in the truck and found three little straps - not the heavy-duty ones, but straps nonetheless.  Hallelujah!

He was reasonably sure that we could make it back to my house as long as we took it slow and easy, so I called Digger back and told him not to come get us yet.  We'd see how far we could make it.

We limped on back home, about two and a half hours behind schedule, but we made it.  My kids were already there (and had been for a couple of hours).  I was exhausted and over the whole thing, but the bales still needed to be moved from the truck and trailer to the hay shed.

I'd decided to put the horses in Estes' old pen so we could just open the fence and drive the trailer in.  Bless our horses, they were amazing.  Copper hasn't wanted to be caught and haltered for the past couple of weeks, so Jay's been working on it.  I think that over the winter, Copper just decided life was pretty good without being caught.  I was ready to have to move him and really work to get him haltered.  Bill got Skeeter caught in under a minute while I headed for Copper.  Copper backed away for about twenty steps before deciding that if his sister was caught, he might as well be too.  Took less than two minutes to catch and halter Copper.  Whew.  Finally, something about the day went right!

They walked nicely over to Estes' pen, where we turned them loose to graze.  There were no complaints from them about that! 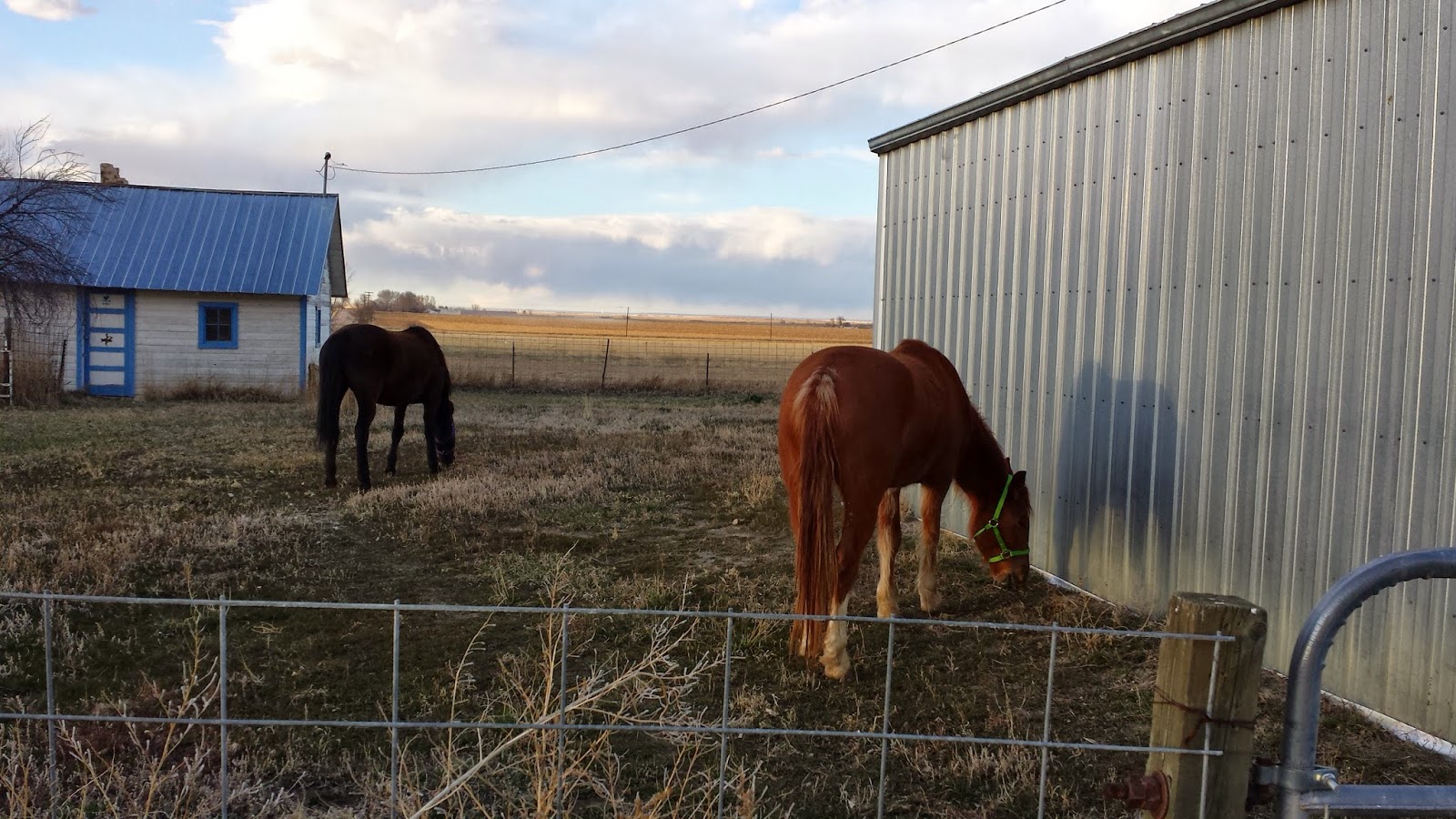 I don't usually like leaving halters on them when they are unattended, but I thought that if they got the notion to jump the four-foot fence at least we had a chance of catching them if they were haltered.

I took the horses' behavior as a sign that things were finally going right with this damn hay moving day.  Digger and Ashinator's boyfriend started helping unload and stack and I was so happy.  Not five minutes after we started, my youngest brother showed up with his family to help and I was overjoyed!  It took no time at all to get it all done. 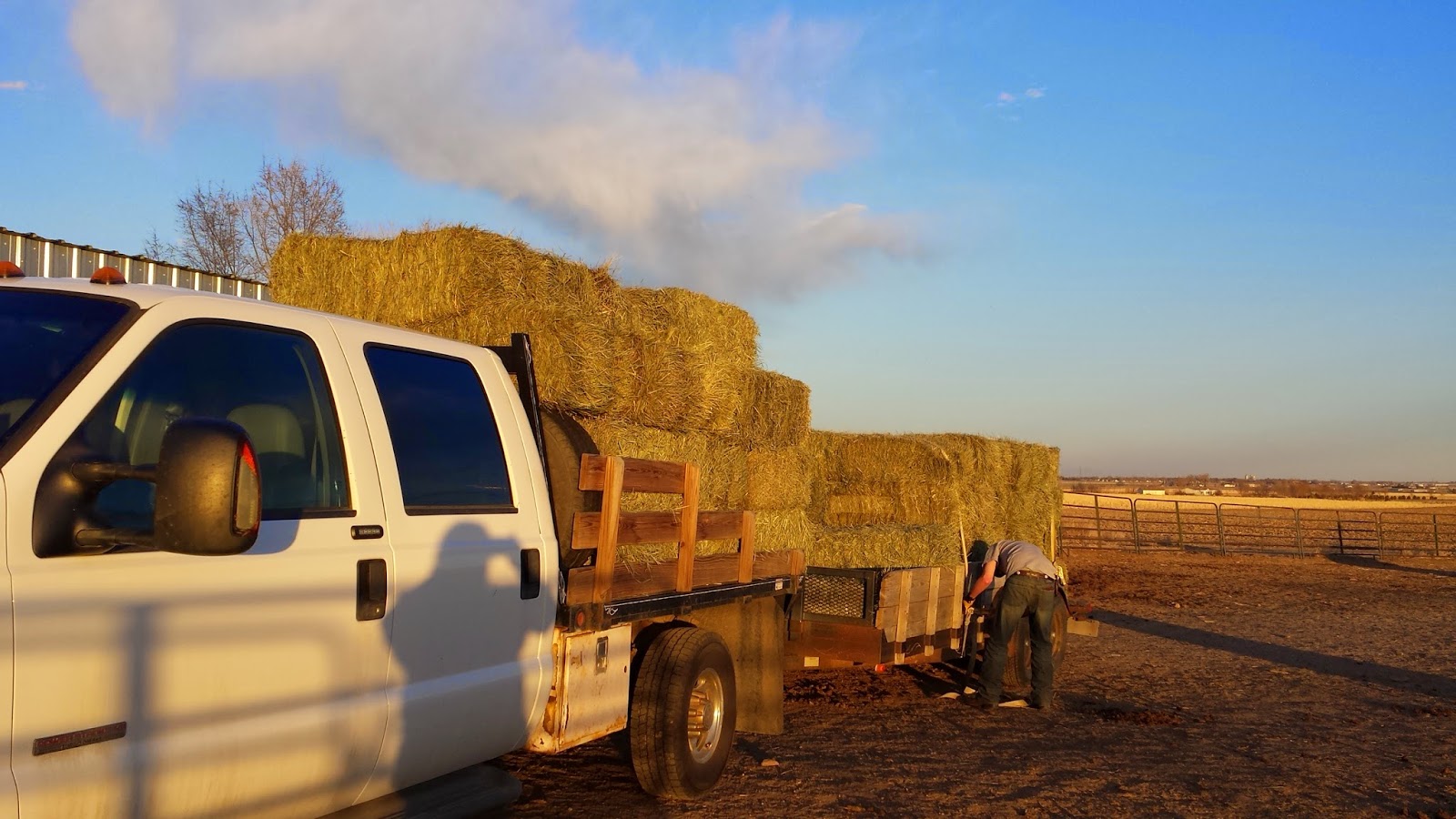 Before we knew it, it was time to move the horses back from Estes' pen, and not a moment too soon, because the sun was setting fast!

Ashinator had manned the grill and had dinner ready for us by the time we were finished.  She might not have done any of the heavy lifting, but she definitely played an important role in hay moving day.  I was famished.

The hay adventure started on a bad foot, but ended with food, drinks, and laughter with some of my favorite people.

That's a super price. Wo-man handling hay was not my favorite thing to do, but afterwards, I always had such a great feeling of accomplishment to make the aches and scratches feel better.

You are a rock star. No doubt about it.