Thank God for good friends.  When Mom called and told me that Estes needed to be moved ASAP, I called a friend who I know has some land and already has a horse on her property, thinking that maybe she would let me lease a spot for a month or so.  She agreed, but the next morning called me with what she thought would be a better place.

Turns out she has a friend who might have a better set-up for Estes and she wanted me to look at it.  My friend had remembered that Estes is getting up there in age and thought she might appreciate some formal shelter.

The place is perfect and beautiful and only about five minutes from our place.  For the first time since I've owned her, I'll be able to be with her every day.  I'm a lot excited about that.

Mom got directions to Estes' current pasture and we headed out to pick up my baby.

After traipsing through the cow pasture, we spotted the horses.  Estes saw us coming, she went on alert as soon as she heard us, but being Queen of Everything, she allowed us to cross the pasture to approach her.  We had assumed she'd be out there with the big herd, but it was just  Her Highness, Paint, and the Shetland-cross horse-type thing.

Paint was one of our livery string back way back when, so he's an old friend.  And I mean OLD, he's 27 if he's a day and he's lost an eye, which is kind of creepy, but he's still a sweetie.

Estee was perfectly happy to let me rub on her, but we had to go through the ritual of pretending to run away.

Once she was certain I understood that she was still the Queen, oh about thirty seconds, she decided that she could come with me and practically haltered herself.


We spent a few minutes loving on Paint, who looks really good for his age, other than that eye thing. 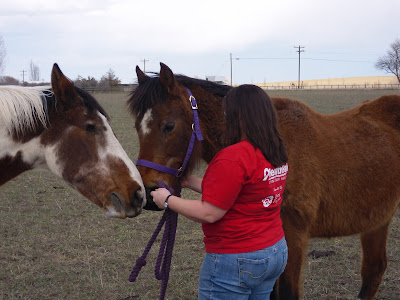 The Shetland-cross horse-type thing is supposed to be Paint's companion animal.  I think that's another way of saying he/she/it is Paint's seeing eye dog.

The thing I *hate* about picking up Estes from winter pasture is all of the crying and going on when I lead her to the trailer.  This year was worse, because it was just the three of them and the cows and I'm pretty sure Paint doesn't count the half-horse as a herd member.  Paint bellowed and hollered and Estes bellowed and hollered and the little one tried, but it came out sounding more like a squeak.

It only took us about forty minutes to get to Her Highness' new place.  She's got a house in her pen.  Like, an actual two-room house, which is super cute.  She's also got a stall that I doubt she'll use, but I did take the time to show it to her.


I led her around the perimeter of her new place and turned her loose.  She was more than a little happy to start grazing on the new grass, while the Bionic Cowgirl and I unpacked all of her stuff.  "All of her stuff" was ten bales of hay and her bucket 'o supplies.  She's a light traveler.

See that little building behind Estes?  That's the little two-room house I was talking about.  I opened the door to put her bucket inside and had to quickly shut the door.  While Her Highness wasn't overly excited about having her very own stall, she was certainly interested in claiming the house as hers.  Maybe I shouldn't have taught her to follow me through the Lodge, after all.

She hollered after us as we left, but when I went back this evening to check on her, she was quiet and grazing.  Mom and I had loaded up a couple of hay bags and I hung one on a post in the middle of the pen and one in the stall.  When I went to check on her tonight, she hadn't touched either bag of hay.  I took her a handful, which she ate, but then looked at me with disdain and went back to the new grass coming up.

She's got to put on some weight, so I'll be free-feeding as much hay as she'll take and start her on some Senior Feed this week.  I'm hoping to get some weight on her in the next four weeks.
Posted by GunDiva at 10:37 PM

Of course the Queen of everything would choose the house over the stall! Silly yo think otherwise.
Yay for Estes being so close :)
I am happy for both of you.

Yes I agree with Allison, The Queen of Everything should not lower herself to a lowly stall. Only the house will do!
Great post!

I was cracking up as I was reading... and then you beat me to it. The whole house vs. stall thing is hilarious! She is such royalty!