Today's ride kind of sucked.  Not sucked-sucked, but not as fun as the last one was.

I braided a neck rein using bailing twine (I love that stuff) and intended to use it for most of the ride, while using the halter/rein as back up.


On the upside, my favorite wrangler went out with us as far as the switchback.  He was waiting on a four-hour ride to show up, but wandered out with us until he saw his ride pull into the parking lot, then he had to turn back.  College Boy's got a great way with horses and Estes loves him very much - she just buries her head in his chest whenever she sees him.

Estee was going so well that I seriously considered taking off her halter/rein and stashing it at the top of the switchback.  Good thing I didn't.  We had lots of discussions.

Lots and lots of discussions.

At every trail that headed home.

Estes is pretty light in the mouth, it doesn't take a whole lot of mouth pressure to get her to do anything.  However, she's not so light when it comes to nose pressure.  One of my "steps" to going bridleless was to switch out to Mrs. Mom's halter and Ashee's barrel rein to see how she would do without a bit.  Let's just say I got a total body workout today.  She's starting to get the idea of nose pressure, but she's also figured out it's a whole lot easier to eat without a bit in.  I've got to get that issue figured out.

We stopped for a picnic at the pond again.  Mostly so I could look around to see if I could find my knife that I lost last week.  Ranger Danger really enjoyed the dessert aspect of the picnic.


In between the discussions, we did enjoy the views.  The aspen are turning and it's hard to believe that just last week the pond looked like this... 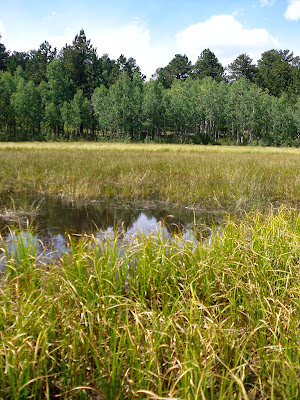 This is what the same area looked like today... 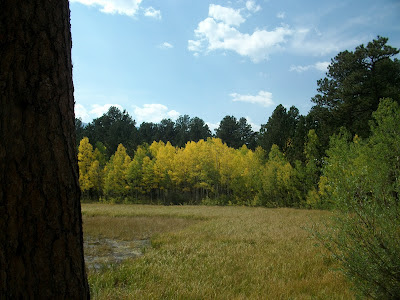 After the picnic, Estes and I continued to have discussions, though they were fewer than on the way out.  I'm guessing that would be because I had come to my senses and we were headed home.

When we got back to the Lodge, Estes very nicely parked herself at the tackroom door for me to dismount.  This time, she didn't go up onto the steps.  I eventually slid off (hey, I was tired and the ground seemed like an awfully long way down) and lead her to the hitchrack, but I didn't bother tying her up.  Once she's "parked" at the rail, she's there until I move her.

Without a second thought, I went into the Lodge through the tackroom door and she followed me right in.  No hesitation like last time.  She just wandered in like she owned the place.


She was showing an interest in all of the people barn this time and headed toward the living room, so Bill hustled out with the video camera.

It didn't take much to encourage her to cross the scary rugs once she saw me standing on them, and I'm really glad her little skitter on the hardwood was with her unshod back feet. I'd still be on my hands and knees sanding the floor if she had scuffed up the floor with her shoes.

You'll be happy to know that when she went back to the rail, I actually hooked her up. I might have created a monster.
Posted by GunDiva at 10:46 PM

Silly girl! She wants to be an inside pet :)

How are the shoes doing for her?

You are so lucky to have trails like that to ride on, and with such pretty views! It is amazing how those trees turned that fast! Here, it is getting cold at night and in the morning, but the trees have not started to change yet.

I giggle over the use of the word "discussions". I sure beats fighting. Your changing colors of fall made our news over here in Arizona. We're still in triple-digit temperatures and plenty jealous. Nice stroll through the lodge.

Estes is a character! Love that big grin on your face, it's easy to see how much you love her.

Yep. That mare is a cool, kick-ass horse!

OH my gosh - I love love LOVE her! I mean, I love you guys too, but I wouldn't feel quite so awkward squealing when I see her and telling her that Bay Girls are my favorite :)

Adore the video - must see her do it in person! ;)

And those aspens... sigh.

Haha, I love the video, I've always wanted to bring my horse inside my house :)