The first part of the ride is here.

I try to have a goal for each season.  My goal this season is to ride the one-hour trail bridleless.  To that end, I've been practicing dropping the reins when we're out on the trails.  Estes was doing so well on this ride that when we hit the bottom of Pinky's Wash, I decided to try to ride back home entirely without using my reins.


We did okay.  Not spectacular, but okay. I had three times I used the reins.  The first was to reinforce the whoa.  Even that was good.  Estes is a very forward horse and we've been working on her whoa all summer.  I knew there would be no way in hell I could go bridleless without a good whoa.  She and I have had some pretty good battles over whoa this summer.  This whoa wasn't one of those battles.  I gave her the verbal command, sat down hard with my seat and she didn't stop, so I reached forward for the reins and slid them back on her neck toward me.  She stopped.  That's a huge step.  You can see in the picture how relaxed she is and how much play I still have in the reins.  I never even picked them up, just slid them toward me.


I don't have a picture of my second rein touch because Bill and Ranger were trying hard to keep up with us.  I'd moved her into a trot, which was really nice until she realized Ranger and Bill were trotting along, too.  Then the horse race was on.  Before it really got out of hand, I had to rein her in.  With Bill bouncing along on Ranger's crazy lope (he looks like a porpoise), there wasn't an opportunity for a picture.

After we got them back down to a walk, I dropped the reins and away we went.  Into a tree.
Since she wasn't able to scrape me off on that tree, she tried a different one.  I figured I could duck under the first set of branches, but then I got a look at the second set of branches and there was my third rein touch. 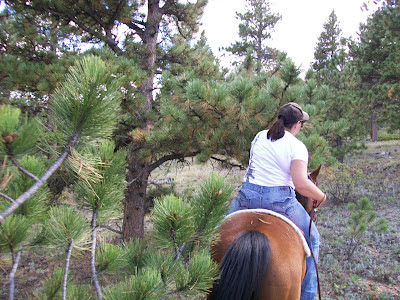 I feel pretty good about that touch, too, though.  It didn't take any mouth pressure to move her off the tree, simply rein pressure across her neck.  One of the things I'm going to do when I do my bridleless ride is to use a neck rope like the one Julie Goodnight has designed.

Only, I don't own one of Julie's yet, so I'll probably use braided twine until I buy one of hers.  Since I'm planning on using a neck rope, I was happy to see her respond to just neck pressure.  Yes, she's trained to neck rein, but when she gets stubborn (not that that ever happens), I have to go do direct reining.

The rest of the ride was uneventful, which I was really thankful for.  We'd agreed that we'd go to reins to cross the highway, just for safety's sake.  Our "rule" is that the bridleless riding will begin and end at the highway.  Not sure how that will work once I actually leave the headgear behind at the lodge, though.

My plans to continue toward my goal are:
I should note that Bill doesn't have enough sense to bridle his horse and has been riding essentially bridleless forever, so while I get all giddy about riding home without the reins, he's been doing it all along. He's just gracious enough not to rub it in my face.
Posted by GunDiva at 12:32 PM

Awesome! It seems getting to be winter goals are all the rage! It's a good time to set horse goals, I think.

You can do it! And I can't wait to read about it!

Bridleless is all about communication, isn't it? There are lots of ways to ask, and bless'em, our horses are more than willing to give.

Oh yeah- that is *totally* an Eat Shit and DIE face in that one shot!


Bet I can make you a neck rope. And a set of purple reins with scissor snaps to match the pretty halter :) Just say the word, and we'll hook you up!

Looks like you both had fun. I really like that you have concrete goals. As soon as I get my hip in order, ( I fell off Buddy!) I am going to take your example and make some goals with each of my horses.

It would be a whole lot easier to work on some of our goals if we had an arena to work in. I'm not a huge fan of arena work, being an outdoor girl, but things like bridleless riding would be easier to focus on in an arena.

I can't remember the last time I put a bridle on Kona, but that's only been in the pasture... where I know that we're relatively safe unless she crashes through the fence. Again.

So excited that you've gotten so far with Estes! Sorry for laughing at the pic of her barking you...

GREAT ride on your princess! A suggestion for the highway: are you willing to ride her across the highway with a bridle, then pull it off and hang it in a tree near the road? That way you can pick it up again when you're close to home and put it back on.