Alternatively titled: How to Potentially Kill Yourself and Your Horse

A while back, Mrs Mom made a "Trail Riders' Mounting Strap" for people who need a little extra help mounting while out on the trail. 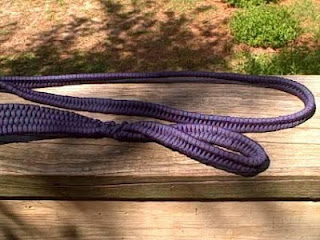 Bill and I tried it with a tow strap, figured out how long we'd need it and I sent off my idea to Mrs Mom.

My Million Dollar Idea came in last week, but I wasn't able to get up to the lodge to play with it, so I told Mom and Bill to give it ago.

Being the good bloggers they are, the remembered to take video.  Bill and Ranger went first...
It might have worked better if Ranger wasn't so ornery.  After the first time, you can see him wait until Bill's ready and then he deliberately steps off the strap.  I love that horse :)


So Bill decided to out-smart him and tie the strap around his leg.


After Bill had success, Mom and Washoe gave it a go.  They started with the strap under the hoof, too, but Washoe was having none of it.


So Mom followed Bill's lead and tied it around Washoe's leg.  Untying the knot looked a whole lot like horse yoga or something.


Yesterday, after I got off work from the Livery, I decided to finally try out my Million Dollar Idea on my own horse.  Knowing Mom and Bill had success, I was ready to go!

I was fairly smug about the fact that I knew Her Highness, Queen Estes would not step off of the strap until I told her to.  All of the hoof soaking we did last year gave me confidence that she'll leave her hooves where I tell her to.  And she did.  She stood like a pro the whole time I tried climbing up.  (And of course Bill didn't get any video of that!  I think he's trying to sabotage me.)

I tried and tried, but couldn't get my arse up. The failure with the strap was me. I don't know if I was just physically exhausted from working or I'm just a dumbass, but I couldn't get it to work out. So I tried the old tie-it-around-her-leg trick that worked for Mom and Bill.


I have my suspicions about why it won't work for me, but I'll hold onto those for now until I get a chance to try it again when I'm not so physically wiped out.
Posted by GunDiva at 6:48 PM

I think it is a good idea!! Dang Estes is tall! Hope it works for you went you try again.

I saw a car sticker the other day that said Estes Park, CO. Reminded me of you and Estes!

LOL Bill and your Mom are sure troopers!!! LOL

Bill looked like he could have put his horse in that ditch and just slid on! LOL He is tall!

I hope you can get it too! LOL

Oh my God, Allison, you SOOOOOOO made my night!

Estes is only 14.2hh, but I'm "fun-sized" at only 15hh. Isn't perspective a great thing? Estes looks so much taller than she really is because I'm so short.

Estes and Ranger are the same height, but he looks short because Beel is so danged tall :)

You and Shy are coming along great! You'll be barebackin' in no time!

LOL Thanks for such entertaining videos. I was cracking up at watching the horses lifting their feet up! Boy, are they smart!
I do, however, think the strap is a really great idea! I guess you just need some refinement!

What a great idea. I wouldn't be able to hike my leg up that high either because of my hip dysplasia and creaky knees. Looks like it could just use another 12-16" in length and it would be perfect. It's such a beautiful purple color! Nice choice!

A couple of ideas: instead of tying it around the leg, make a big loop so that when you do get on just slide the loop down the leg and have them step out of it- no yoga involved! It could be designed with a loop at each end Also, a piece of sheepskin about 6 inches wide around it that you could set where the rope goes around the horse's elbow would be less abrasive on the horse.
Your horses are such troopers!

Shirley, we were discussing adding a clip, so we wouldn't have to untie it, nor would we have to have them step out of something. It's a work in progress (for me, obviously, more so than for my parents).

Of course it's because Estes is a warmblood and vastly taller than the average equine. Of course.

And can I just get a whoo-hoo the Bionic Cowgirl at the :17 mark of her second video. That girl is a ballet star :)