Jelly Bean (Or, The Beginning of My Bionic Mother) 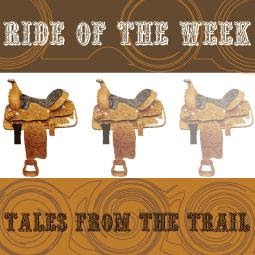 It's been a long while since we've had a ROTW, but Mom was kind enough to provide me with one.  Mostly, I think, because she's going batcrap crazy while healing up from her hip replacement.


Four years ago, we were to visit some friends on their desert ranch in Arizona, for a two week riding vacation. It was March and here in Colorado is was cold and icy, so we could hardly wait to get to sunny Blue Sky Ranch. During our phone conversations with Bucky, he had mentioned purchasing a new “marvelous” mare at one of the local sales. She would be perfect for me to use the whole time we were there, so bring my saddle. He was so delighted with this horse it was all he could talk about.

After the normal 15 hour drive we arrived late and got settled into the bunkhouse. Next morning dawned bright and sunny, just right for a starter ride – and at breakfast all I heard about was this fantastic horse named Jelly Bean. (That name should have been my first clue.) We all headed out to round up horses. My second clue should have been when Bucky said nobody had ridden her yet because he was saving her for me, and letting her get settled into her new home – a very good idea.

We walk Miss Jelly Bean into the round pen, groom her and saddle her with my gear. She seems a tad jumpy, but not excessively so for being in new surroundings and with strangers. I spend some extra time with her and she seems to settle down and starts getting friendly, so I decide to mount up. Bucky is standing beside her head ready to snag her if she starts to walk off, as many ranch horses do. She stands rock solid like the well behaved horse I’ve heard about. I put my left foot in the stirrup and swing my leg over the saddle, gently settling down onto the saddle seat.

Boom! My other foot hadn’t made it to the stirrup when Jelly Bean exploded. She might have been small but she was definitely mighty. I went flying off on about the fourth pitch, hitting the dirt hard. Scrambling up and diving for the fence, I reach for the top rail to heave myself over and get out of this crazy mare’s way, who is now charging everything inside the round pen. That’s when I realize I have done real damage to my wrist. I had smashed it into the base of one of the round pen posts. I have yet to instinctively curl up and hit the ground rolling; I know this is what to do, but…. Just four months earlier, I had dislocated my left shoulder, so I tucked that into my chest and stuck my right arm out in front to protect it. Yeah, not such a good idea in retrospect!

After catching goofy mare and returning her to a pen, we spent the next three and a half hours trying to find a clinic/doctor/hospital that could take care of my wrist, which I thought was just dislocated. Not so, they all said, and continued to send me on to the next small Arizona town. Finally, an ER doc told us who we needed to see, and sure enough, that worked out. I ended up in surgery the next day, Good Friday of all days, and got to finish my vacation with a bandage on my arm. Thanks to a good orthopedist, I have a titanium plate and seven pins in my wrist…and 95% normal usage. Do I roll when I hit the ground now? Nope, still haven’t perfected that, but I am much more careful about strange horses.

Epilogue: Pour Jelly Bean got sent off to an ex-bronc-rider trainer at a ranch nearby. We started assuming she had been drugged at the auction to keep her quiet for the kids to ride around bareback. The trainer rode her for several days, doing his ranch work, without incident. Then he put his wife on her (a non-rider) for a ride and they loved her. A couple weeks later the trainer again got on her and said, “She broke in two the middle I hit the saddle; nearly put me on the ground. That horse can buck!” They wouldn’t tell me what happened to her after that, but she never got to come back to the ranch as a dude horse.

GunDiva's notes: What Mom left out of this story was that she took two ginger root capsules (!) for inflammation/pain control, and after they drove all over creation trying to find a doctor/clinic who could handle her injuries, she returned to the ranch to help feed.  One handed.  With no true pain meds.  She refused pain meds, saying that the ginger root was doing just fine.  She's either the toughest person on the planet or the craziest - I haven't decided yet.
Posted by GunDiva at 8:51 PM

Labels: Ride of the Week

OY! I was already flinching at the part where no one had ridden her yet!

And my very first mare was like that! Drugged at showing, then an psychotic beast the next day.

So glad you weren't hurt worse (by the charging!)

And because I've broken my wrists three times, I'm gonna go for "crazy"... because I don't think Ginger Root can quite touch that :) Sorry Juanita... you're one tough chick! :)

Um wow. I would have been leery with the not ridden comment yet too lol. I am so happy nobody was hurt worse. I can't understand how people can be so conniving to trick people that way. What if that horse was for a child you know. Anyway, it makes you wonder about Jelly bean huh?

Good lord. Stories like this are why I am extremely reluctant to ride other people's horses, especially other people's new horses. Also, narcotics are the universe's consolation prize for getting injured - should I ever suffer anything worse than a busted tailbone, you can bet I will be blogging stoned on Lortab. Your mom is totally metal!

I'm pretty bad about not riding other people's horses--that Jellybean sounded a little nuts! Glad you survived it!

This didn't sound good from the start. Jelly Bean is definitely not my kind of horse.

Glad to know the shoulder injury didn't get worse. That would have really added to an already big mess.