I posted about my ride on Sunday with Monster and then realized that I never posted about his first ride on Estes.

Monster and Estes share a special bond that came from out of nowhere.  Estes decided she loved Monster and he became her human, not-so-subtly removing me from the "favorite human" standing. 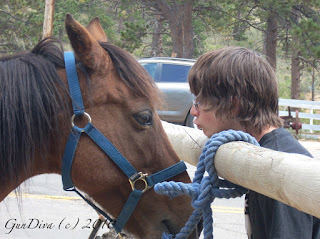 Monster's not really a horse guy.  He's a skater dude.  He had no interest in horses until Estes chose him as her human.  He'd probably ridden less than fivetimes his entire life and hasn't enjoyed it much, so imagine my surprise when he told me he wanted to ride Estes.  Estes is not a beginner's horse.  Not even close to being a beginner's horse.  In fact, I was terrified to ride her and then I fell in love with her.  Ashinator is my horse girl and she has no desire to ride Estes.

I was worried about Monster riding Estes due to both his lack of experience and her tendency to be rather mare-ish.  But then I watched them together and realized that she wasn't going to do anything to hurt him, so I grabbed Ranger and we got ready to go. 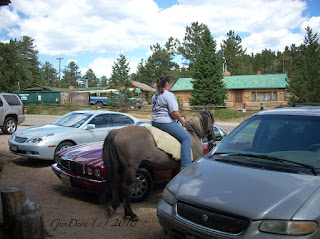 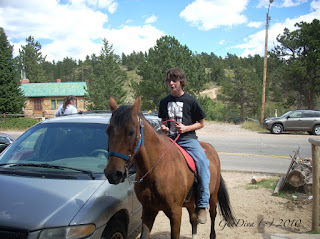 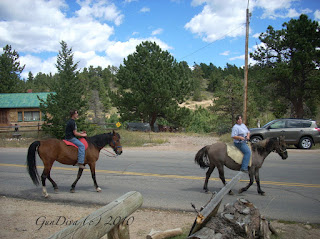 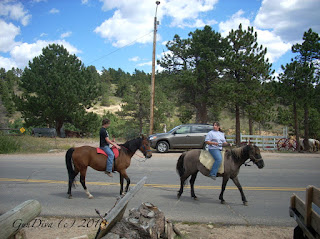 I don't know if it's because of the extraordinary balance he has to have to skate or if he's just a natural rider.  We went around the block and called it a day.  But the riding bug had bitten Monster.  He's gained a lot of confidence in just a short period of time.  The second time he rode, he rode in just a halter and lead rope (which I haven't been brave enough to try yet).  The third time, he and Bill trotted more than half a mile.  Sunday's ride was only the fourth or fifth time he's been up on Estes and he decided to tackle the trail.
And he's done it all bareback!
He spent the beginning of the ride asking when he would be able to canter on her.  I told him that he'd have to wait until he got a little bit more experience under his belt before he could attempt a canter - so he agreed to wait until next summer.
We'll see what new goal he sets for himself next weekend when he's working.
Posted by GunDiva at 6:00 AM

I love it when a horse picks their person... and the person responds too :)

This kid is a real natural on horses, even down to knowing when to stay on and when to get off. His behavior was perfect with her when she acted up on the mountain. Some of that stuff takes years for people to learn, and he just seemed to know what to do. It helps that there is no fear in him; after helping take care of her on the ground, he now 'understands' her and the fear has gone away.
Juanita

My issue with not wanting him to canter her yet is that she's a "take the bit and take charge" kinda gal and he's not comfortable with that part of her yet.

Also, she's been on injured reserve and is just now starting to feel better - she's got a lot of pent-up energy that I'm hard-pressed to handle - I'm not sure Monster would come out unscathed.