The Birthday Ride That Wasn't

Despite last week's misadventures, we had a really great ride and I couldn't wait to get up there for my birthday ride.

Skeeter was easy to catch, and stood at the rail like a broke horse. In fact, I was so proud of her, I had to take a picture.

I started with her right front, but she kept offering her left front, so I switched up. Getting her boot on her left front was a breeze (relatively), so I was confident that I could go back to the right and it would go on as easy. Silly me. She wanted nothing to do with lifting her hoof, going so far as to lean her right shoulder onto my back. Bill came over and attempted to lift her foot. After a couple of tries, she gave him her foot, but then set back and sat on her ass. Such a mare!

Eventually, between the two of us we were able to get her hoof cleaned out and her boot on. I was starting to get frustrated and wanted to just say "screw it, if she doesn't want to go out, we won't". However, this was my freaking birthday ride and I'd just driven an hour and a half to get to the lodge so we could ride. By God, we were going for a ride.

Last week, I attempted to ride Skeeter up the switchback and it didn't go well, so this week I decided I was going to lead her up it and then mount up. I really hate having to hand walk her from the lodge to the top of the hill, but it seemed like a lot of work to mount up, ride to the switchback, dismount, lead her up the switchback, and then re-mount. Copper and I have been walking a mile or so each day for the last week, and we didn't walk that morning before Jay and I headed up the hill, so I thought I'd just suck it up and walk.

Skeeter was being pretty good as we walked toward the switchback. She only snatched a couple bites on our way up to the road and was walking very nicely behind me. About halfway to our crossing point, I felt her head go up and a pop. I was turning to see what had happened when Mom said that she'd stepped on and broken a rein. As I usually do, I had crossed her reins over her neck and just let them be while I was leading her.

I stood there, along the side of the road, just looking at the broken rein. 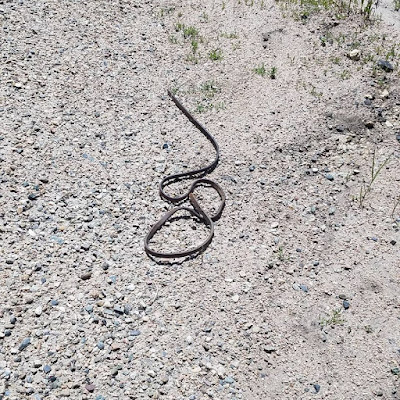 For the second time in less than ten minutes, I considered aborting the ride. First her refusal with the boots, then the rein. A smart woman would have thought maybe God was telling her something and listened. But I'm not a smart woman. I mean, clearly, this was a sign that the ride was not to be, but this was my freaking birthday ride and I'd just driven an hour and a half to get to the lodge so we could ride. By God, we were going for a ride.

We use scissor clips on our reins so we can quickly switch them out if necessary. Mom suggested I take one of her reins from Washoe and move her lead rope to her bit. It was a reasonable, and easy, solution to now being down a rein. I didn't want to mess around with it right then and there since Alloy was getting antsy and we needed to get across the street.

The fight started when we reached the actual trail at the top of the switchback. Skeeter parked herself. Just stopped and said, "no" *. No, however, was not acceptable to me, so I swung my lead rope and drove her forward until she was moving nicely. After about 50 feet, she stopped again and said, "no". Again, no was not acceptable to me, so I drove her forward. After another 50 feet she stopped and parked herself.

This time, I saw the big flashing neon light from God telling me to abort the ride. A smart woman would have paid attention. I am not a smart woman. This was my freaking birthday ride and I'd just driven an hour and a half to get to the lodge so we could ride. By God, we were going for a ride.

When I was done swearing at Skeeter, I realized that what I was doing wasn't working. Over, and over, horse trainers say not to fight with your horse, and not to work them when you're angry. It's the kinder, gentler method of training**. However, I also knew that she shouldn't be allowed to "win" by being stubborn. I looked up and saw Mom, so I had a brilliant solution: Mom and Washoe could pony Skeeter while I got my anger under control.

Mom agreed and rode up to take Skeeter's lead rope. I stomped walked up the trail ahead of them to give Mom room to get Skeets straightened out and moving. I heard Mom say, "oh", and turned in time to see Washoe broadside to Skeeter and Mom hanging off his side like a slow-motion trick rider. Skeeter had set back and sat down on her ass, head in the air, and Washoe was struggling to keep his footing. Mom made the wise choice to let go and fall. Unfortunately, she fell flat on her back with an "oof", but Washoe was able to get his balance and did not get pulled over on top of her.

As soon as Skeeter felt the pressure give, she stopped and parked herself. Stupid mare.

The fall hurt, but Mom is the Bionic Cowgirl, so she got up and dusted herself off. After I made sure that she wasn't dead, broken, or bleeding, I grabbed Skeeter's lead rope and said, "That's It! We're not freaking riding today!"

I'm pretty certain I heard God's eyes roll and a muttered "about time".

Mom mounted back up and I stomped my way back down the hill to the lodge. Funny thing, as soon as we aborted the ride, things quit going wrong. There were no more "misadventures". Mom took stock of her injuries once we got back to the lodge. She landed on two rocks: one at the back of her head, and one at her tailbone. Currently, the knot on her head is mostly gone and it only hurts when she pushes on it. The tailbone is still pretty painful. She thinks she might have broken it, but there's nothing to do even if she has broken it.

Throughout all of Skeeter's silliness, Alloy was a rock star. He's a pretty impatient horse - when he gets moving, he wants to stay moving - so this is good patience training. It's not maybe the way Bill prefers to teach him patience, but we take the opportunity when we can.

Bill and I have plans to ride again on Thursday, but we will just ride Ski Road instead of trying to go up on the hill. It'll be boring (hopefully), but it's a good "remember your brains" ride.

~~~
* Ironically, I just wrote a blog post titled "No Means No. Always". Should have taken my own advice.

** Next time I'm mad at Skeeter, she's going to know it. Kinder, gentler works for a lot of horses, but a stubborn black mare like mine? Sometimes shes need to know when she's in trouble. If I'd gotten after her instead of trying to look for another solution, Mom wouldn't have been pulled off of her horse.
Posted by GunDiva at 6:23 PM

Not laughing laughing. So glad your mom is ok. I broke my tailbone once, took over 8 week to heal at the age of 20. Gah. Owie. Also glad that metal llate in her head prevented....wait, she doesnt have metal there..oh dear. Ps. In the wild, was Skeeters dad an ass of some sorts?

Hope your mom is ok!
Here's a tip for your reins- loop them on the horn with a clove hitch instead of laying them on the neck. Only takes a second and saves from stepping on them.
I'm having a similar issue with Gussie right now- normally she crosses the river when asked but the last 2 times I asked she flat out said no. Not too sure what to do about it as I usually ride alone. May have to wait for another rider to go in front of us before I ask again, a river is no place to pick a fight!