The day after the parade, I again headed up the hill to go for a ride. Mom had taken Skeeter out on a ride with J and her horse General the day before the parade, then we had the parade, but I hadn't yet been on the mountain. Since Mom got to ride two days in a row, it was Bill and Alloy's turn to ride with us.

Skeeter was apparently kind of a shit for Mom when they went out with J and General two days before, but then took a shine to General and claimed him as her new boyfriend, so we had no problems going out with them.

Ever since Skeeter backed off the switchback last summer, we haven't been able to ride her up it. We have to get off and lead her up the switchback. It's rather annoying, but if I fell off the trail it would take me some time to gather the courage to attempt it again. Knowing that she still won't ride up the switchback, I decided to just walk her from the lodge to the top of the switchback. Good Lord, what a mistake that was. She was excellent for the walk. However, my lungs and legs reminded me very quickly that I'm sadly out of shape.

The ride started out beautifully. You know, after I huffed and puffed my way up the switchback and to the top of the hill where I could find a place to mount up. Skeeter's only an inch taller than Estes, but that one inch really makes a difference when I'm trying to get my leg up into the stirrup. There is a rock at the top of the trail that is just the perfect height for me to climb up.

And that was about the last thing that went smoothly for a while. As we were riding down toward the trench trail, I snagged the brim of my HellHat on a branch and popped it loose. The more I tried to fix it, the worse it got, until I finally gave up and took the damn thing off.

The problem with taking off the brim of my HellHat was that I hadn't put any sunscreen on my face and we were just starting our ride. I anticipated getting burnt to a crisp, but the helmet alone offered more shade than I'd anticipated. I still ended up sunburned, but not crispified. I tried putting the brim on Skeeter while we were riding, so she could carry it, but I couldn't quite get it.

Bill and Alloy lead us down toward the trench trail and up through the aspen grove. Man, I love riding through there. Not ten feet up into the aspen grove, I felt Skeeter stumble and looked down in time to see one of her boots go flying off. I called a stop to the ride so I could climb down to recover it. The trail at that point was mostly sand and I knew I'd never be able to get it all brushed off and cleaned out of Skeeter's hoof, so I didn't put the boot back on. Also, Alloy doesn't do well with sit and wait, so I figured the sooner we got going, the better. J offered to tie it to her saddle, along with the brim of my HellHat. I took her up on her offer and mounted back up, leaving Skeeter's other boot on.


We continued up the trail, heading toward the top of the ridge, so we could ride above the beaver ponds. Our order changed a few times - it's good for the horses to learn to ride in any position in a line, so we encourage swapping places. Because of this, I ended up in the middle, with J riding drag. It's a good thing she was, because another 3/4 of a mile up the trail, she noticed that Skeeter had thrown her other boot and was now completely barefoot. Ugh, that mare! I probably wouldn't have noticed until Skeets started tippy-toeing on the gravel road.

We turned around and J lead the way back down the trail in hopes we'd find the other boot. No such luck. But since we were back at the trench trail, we took it over to the creek. I was a bit nervous that more things would go wrong. I mean, seriously, how ridiculous is it that my hat brim came off, and Skeeter lost both boots? I squelched my nerves because nothing that had gone "wrong" was bad, just kind of "OMG, really?".

It took about three steps on the trench trail for me to forget my nervousness. Skeeter was doing amazing and the scenery was breath-taking. 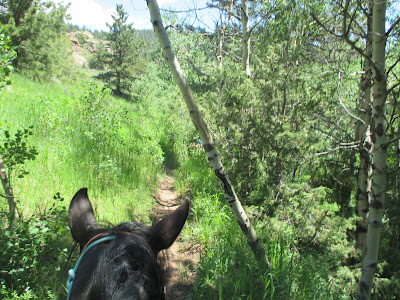 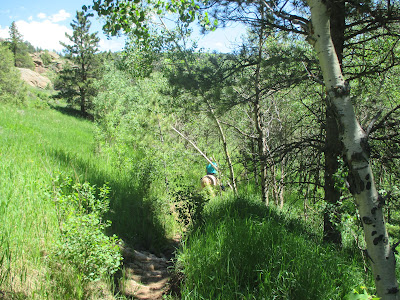 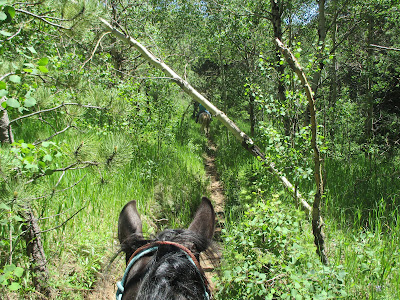 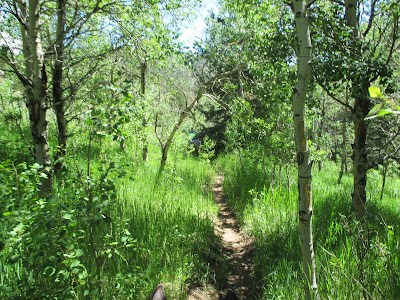 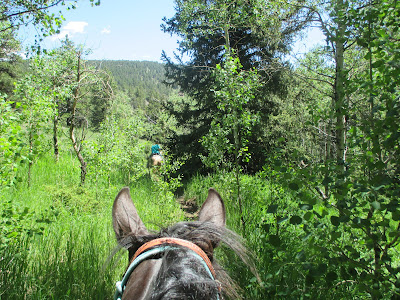 We struggled last year with getting Skeeter to cross the creek, but I figured out a way she would enter the water without balking and was confident we wouldn't have any problems. And we didn't! Well, other than her snatching grass from the bank when I gave her the opportunity to drink. 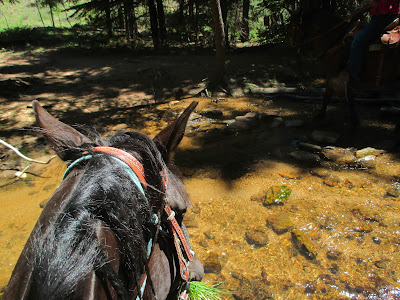 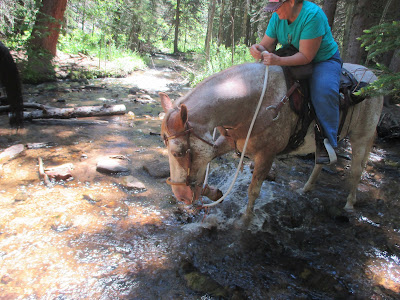 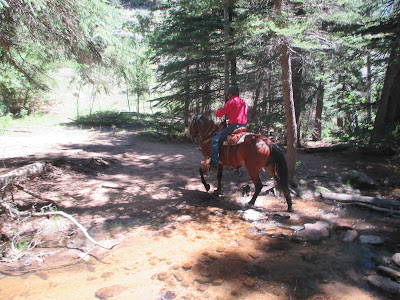 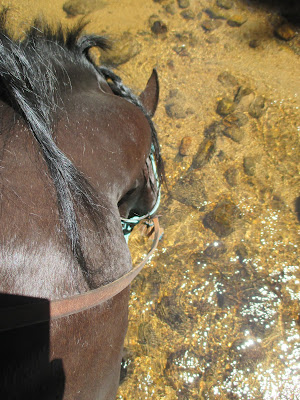 I was super proud of Skeeter not giving me any grief about crossing the water. It's fairly shallow, but we definitely had issues last year, so it's progress. Since the ride was going so well - we had all of the "bad" stuff out of the way - Beel decided that we'd head up to the pond to check it out. Normally, in July, it's starting to dry up, but thanks to the long winter, it was still very full. Sadly, there weren't any "Rocky Mountain Alligators" (frogs) singing, but it was still astoundingly beautiful. The pond is one of my very favorite rides. (I know, I say that about a lot of our trails, and I'll continue to, probably.) 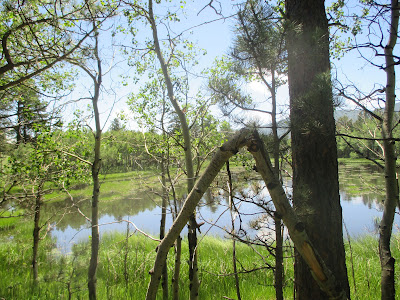 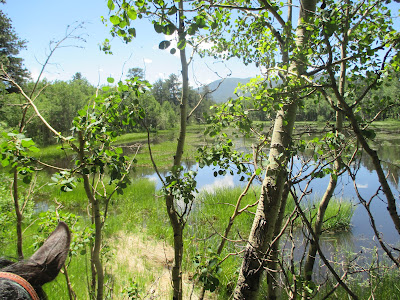 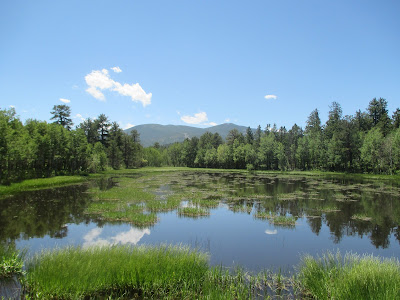 Just as we got to the pond, I took a look at my clock and realized that we needed to head right back to the lodge. As much fun as wandering was, I had a posse shift to cover and I needed to leave around 1:00 p.m. to make briefing. We headed back and arrived at the lodge just at 1:00, but I made Beel take a picture of me and J. It's not every day I get to ride with someone who not only is a member of HCTAA, but who has read my book. You know, besides Mom and Beel, and they don't count.