In August, we did a mare swap: Pearl went up the hill for two weeks while Skeeter went to the trainer's to get some buttons put on. Skeets is really good at trail work, but to do posse stuff she has to be able to do "fancy" stuff as well: sidepassing, turning on the fore and hind. She didn't know how to do any of that. The first trainer update was encouraging:


"Well skeeters pretty damn smart. No buttons when I got on her but by the end of the ride we could sidepass without standing at the fence, pivot both ends, stop within one panel length instead of half a round pen lol and we lope both ways on the correct lead. Usually a sidepass is a 3-4 day ordeal without the fence to help. We also learned to stay 2-3' behind me on the lead rope no matter what I do."

Since the posse arena is Skeeter's kryptonite, the trainer (who is also a posse member) hauled her over there a few times for work, and I had the chance to go have a lesson in the round pen at the arena. I also sent Autobot to do a lesson at the trainer's since she was riding Skeeter so much more often than I was.

The mare re-swap timing didn't work out quite as well as the first time, which was fine with me. I got to have my girl home for a day before she went back up the hill.

She did great at the trainer's, but we were both happy to be back up where our hearts belong. I thought I was getting a rare treat in riding with both my parents, but it turns out it was just the first of many rides I got to take with them both this year. 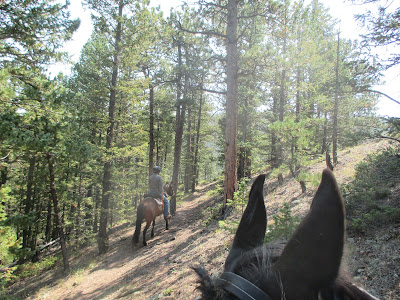 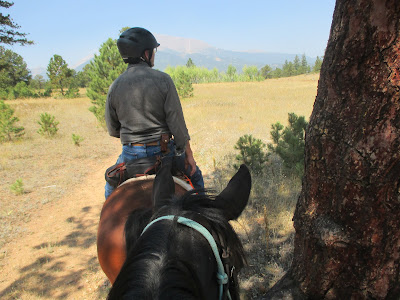 I wouldn't have believed anyone who told me that I'd get to ride out the rest of the summer with both Mom and Bill, but it was true. I think there was only one ride in September in which I didn't have both parents with me. The month started off beautifully. Both of us were thrilled to be back up on the mountain.

We took a long ride down to Rock Creek, which involves some pretty serious descents and ascents, then we looped around the top of the ridge to overlook the beaver ponds. As usual, Skeeter was a rock star. (I should probably mention that Alloy was also a rock star and accompanied us on most of our rides throughout the summer.) 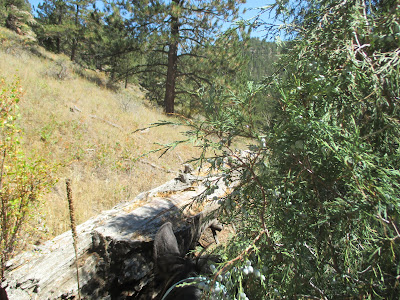 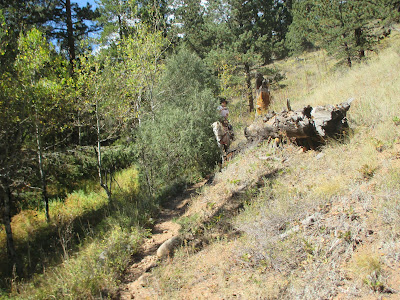 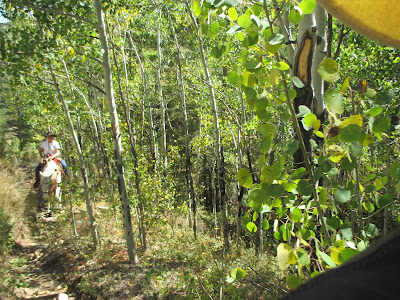 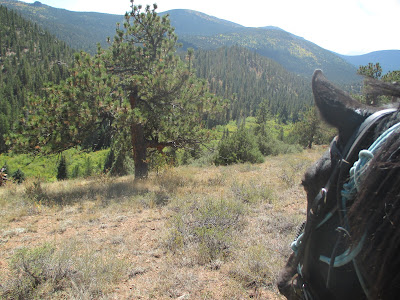 Autobot stopped by my work a couple of days after our amazing ride tell me that Skeeter had backed off the switchback. Skeets was okay, just sore, and Autobot had managed to dismount before Skeets went over the edge. Luckily, she didn't flip over and hurt herself, she just slid down on her belly, shook herself off when she got to the trail below and took off down toward the highway. A car had seen what happened and stopped to help. Skeeter wasn't really intent on going home, thought that she should introduce herself to the new human on the highway, and was easily caught. Thank God. It was the best possible outcome all around. As a result, though, our next scheduled ride became a walk around Ski Road just to keep her loosened up. 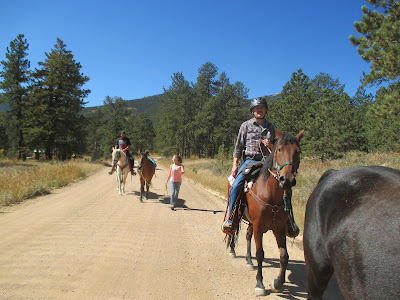 We don't know what caused her to back off the switchback, but there had been a lot of construction recently in that area (a new house is going up on the mountain) and they had practically undercut the switchback to run the utilities. Where there used to be a small rock "wall" delineating the edge of the trail, there was now nothing. It could be that Skeeter backed up to make the tight turn on the switchback and didn't realize the "wall" was gone. But we'll never really know.

I skipped a weekend of riding and ran away with Jay to go look at the amazing fall colors. Autobot continued to do some light riding on Skeets, just to keep her moving as she healed from her mishap. Skeeter, though, had definite ideas about that switchback and would not go up (or down) it unless she was being led. There was no way she was going to carry a rider up and down that switchback - that's something we'll have to work on next summer.

Since Skeeter wouldn't carry a rider up and down the switchback, I had the opportunity to try to get pictures of the "scene of the crime". Unless you've ridden it, it's not going to be very impressive, but falling off that damn thing has always been one of my fears. 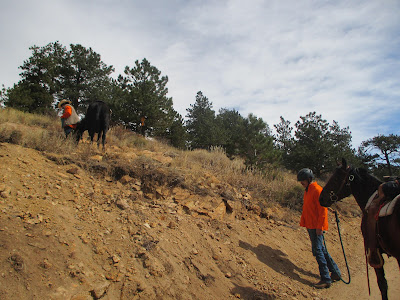 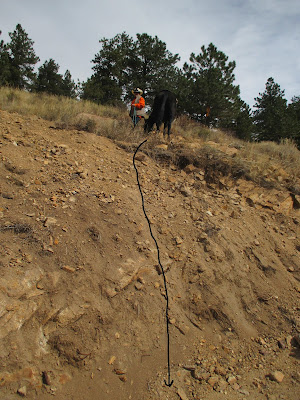 The end of September means the beginning of hunting season, so we broke out our blaze orange for Skeeter's last ride of the year up on the mountain. Despite having to be led up and down the switchback, we had a great ride. 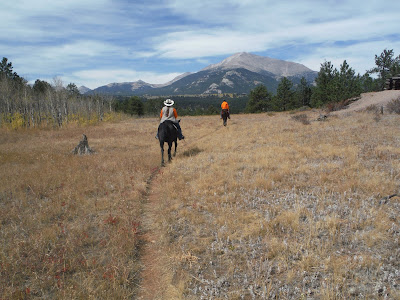 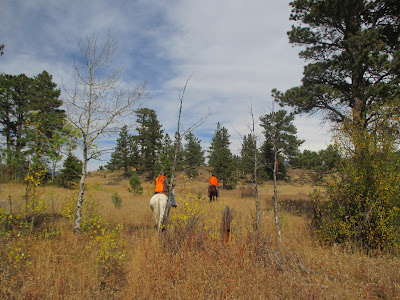 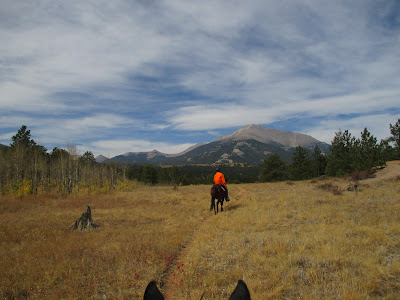 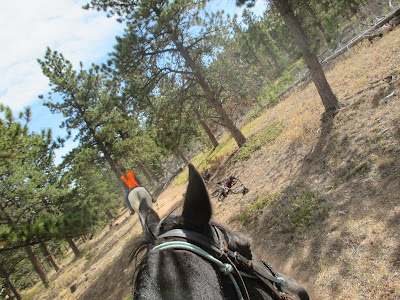 October meant Skeeter got to come home for a bit. Copper was so happy to have his sister home that he wouldn't let me near her. Every time I'd try to love on her, he'd get between us. Normally, I am not a fan of that type of behavior, but I knew exactly how he felt. 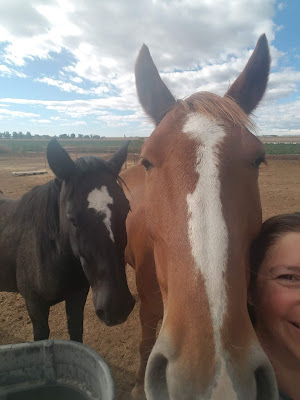 Sadly for Copper, Skeeter was only home for two days before I sent her back to the trainer's for some fine tuning. She'd had all those fancy buttons put on her, but then went right back to trail work and we didn't do any reinforcement of what she learned at the trainer's. We got a great text from the trainer that made my heart swell (not that I had anything to do with it, Autobot, Mom, and Bill did all of the daily work - I just went up and rode each week).


"I have to give you guys props. Skeeter is one of very few that left and came back and when she came back she was even better than before. Great job I love it when I can say that."

The HallowEquine party, hosted by the local chapter of the U.S. Wild Horse and Burro Association, was the perfect time for Skeeter to come home. But, first, we had a blast playing on the obstacle course at Spirit Dancer Ranch. As a volunteer for USWHBA, I was busy doing things on the ground to keep the event moving along, so we sat out most of the games, but after lunch we went down to the obstacle course to play around. Mom, Bill, and Autumn all came down to play with us. 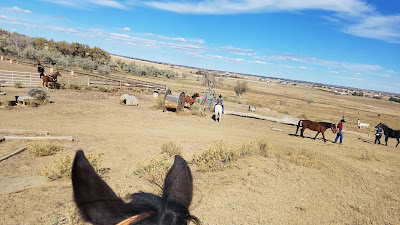 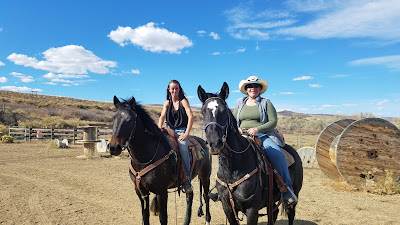 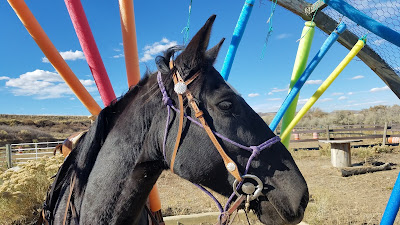 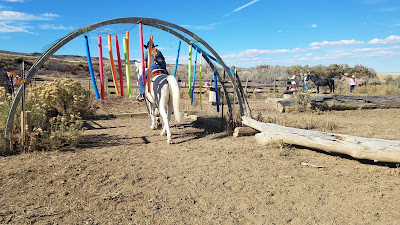 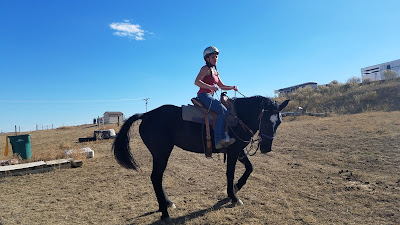 We've all heard of No stirrups November? How about No riding November? Because that's exactly what happened for us. Not one bit of riding. We did try on Pearl's new saddle to see if it fit Skeets. I mean, it is Pearl's saddle, but don't sisters steal each other's clothes all the time? Her black saddle isn't comfortable for either of us any more, so we thought we'd borrow Pearl's. It fits well enough if we shim it that we shouldn't have any issues.

In December, we lost Ranger. It's been a blow to everyone, and I can't imagine how hard next spring is going to be when it's time to move the horses home from winter pasture.

On 12/23, I'd ridden for just a few minutes in the backyard and Skeeter really, really wanted to go for a trail ride down the farm road, but we were the only ones home and I don't like to ride off property without telling someone where I'll be. It was an impromptu ride. I'd pulled her to play Christmas picture dress up and decided to throw the saddle on. Then I decided that five minutes or so would be good for both of us. 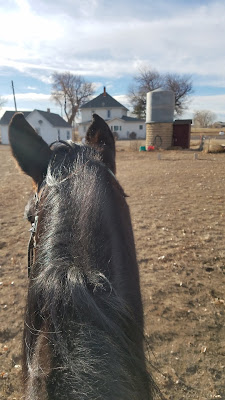 L.E. had some free time over the weekend, so we went across the street to our neighbor's arena. After two months of not riding, I was a bit nervous to climb back up (I can't even tell you how much I miss the fearless cowgirl I was fifteen years ago!) even though I know Skeeter takes such good care of me. We didn't ride long on our first trip over. Another rider joined us shortly after we started riding and since I'm not an arena rider and don't know all of the unspoken rules, I didn't want to get in the way.

The weather was even better the next day, so L.E. and I went back. The other rider joined us, but I was less worried about getting in her way this time. I still tried to be aware of where we were in relation to the other horses and not cut them off. We had a really good ride and I wish that the weather hadn't been so crappy today so we could have ridden again today.

Yay! So happy for you. Your bond is stronger each ride.