Jay and I kept getting ads on Facebook about an upcoming tack auction, but the local one happened to be the same night as the EMM finals. It was a no-brainer as to which auction we were going to. I was a little disappointed to miss the tack auction, but got over it pretty quickly.

Well, Tuesday, lo and behold, we get another ad on Facebook for the same auction, just held at a different site. I remembered that the original ad said there would be multiple auctions, so Jay and I made a date of it.

We had a vague idea of what we were looking for, but we were mostly just going for fun. Since I have a black saddle, I thought maybe I'd find a black headstall for Skeets. Even though Pearl has joined the family, we weren't looking for things for her. We wanted to wait until we have our first lesson with Jessica to get an idea of saddle size before we bought one for her.

We got to the auction with only about 15 minutes to look through the inventory, so we kind of ran through and made mental notes of what we'd like. One of the things that caught my eye was a good wool/gel saddle pad. There was also a cute red synthetic kid's saddle that I thought we'd bid on. I was willing to pay $30 - it went for $105, so no kid's saddle for us.

The auction started and the floodgates opened. In the end, we had purchased a whole lot more than we intended to, but we got screaming deals on everything. 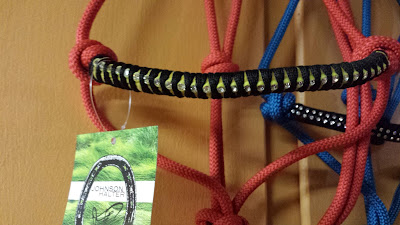 This was the last tack auction. The auctioneers were tired of the whole damn thing and it showed, so items went for next to nothing. We watched custom saddles, normally $2,800 go for $450 or less.

They finally pulled a row of saddles lined them up on the front tables, bid for choice and they went for $250 each. Then they'd add saddles to the front tables and bid for choice again. They did that over and over again, until all of the 100 saddles were sold. Some brand new saddles went for as low as $120. If we had known which ones would fit Pearl, we probably would have picked one up.

There was one lady there who was buying like she'd just won the lotto. She had to have spent $10,000, easy. At first, we thought she had a large herd she was buying for, but with the quantities she was buying, we changed our mind and decided she owned a store and was buying stock.

Despite the buying frenzy we were in, we managed to spend less than $450, which is pretty darn good considering what we brought home.

Now I can't wait to go play dress-up with Skeeter and Copper tomorrow!
Posted by GunDiva at 10:33 PM

I can't believe I forgot to add that we bought four saddle covers, a good leather punch, and a pocket knife for Jay. 22 items total for $375 (not including service fees and tax).

Yup, buying the horse is the cheap part.

The rope halters and the Batman (Aussie) saddle ended up going to the consignment store. We had to clean out our tack room so we had some space. As much fun as the bling rope halters were, they had to go.

We also took some of the tack that we aren't currently using. Jay's Justin Dunn sidepull did not work at all for Copper, so it went, and I gave up Estes' headstall. I loved that headstall, but it was time to move Skeeter into her own tack.