I've been looking for horse toys to keep Skeeter occupied.  Now that she's completely settled into home, she has to be kept busy or she eats things.  I can't be there 24/7 to keep her entertained and my work schedule is going to get crazy for the next four weeks.

Jay and I had a movie day planned for yesterday and stopped by the dollar store to pick up some candy.  Right outside the store were pool noodles, $1.00 each, so I had to pick some up.  I figured I could hang them in her shed like the "car washes" so popular with competitive trail classes.


I figured nosing them around and moving through them might hold her interest for a while.  Since she likes to chew on everything, I even thought she'd keep busy by trying to catch them in her mouth.

Skeeter, being so curious and helpful, wasn't at all afraid of the noodles and kept getting in our way as we tried to tie them to the rafters in her shed.  I finally took one of the noodles and started dragging it along the ground to keep her interest.  She looked like a 900# cat chasing the noodle.  I'm just thankful she didn't try to pounce on the damn thing like a cat, too.  I might have shat myself if that happened.

I only bought three noodles and we hung two of them in her shed. She inspected them, tried them out to see if they'd work for a back scratcher (they don't, much to her displeasure), and then ignored them. 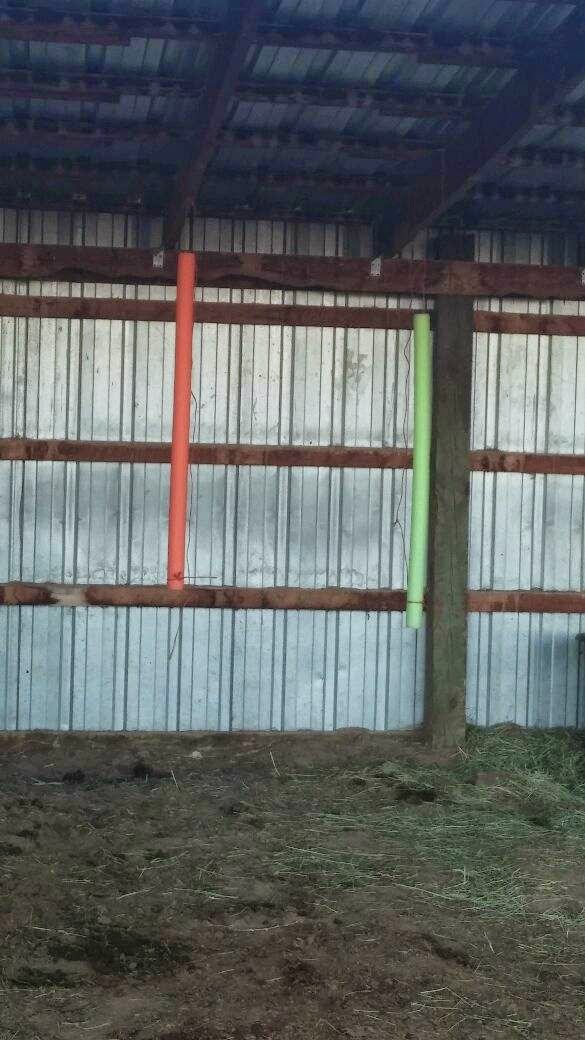 The third, since she was having so much fun trying to eat it, we hung on her panels as a roller.  Trying to tie it up while she was playing with it was a lot like trying to knit with a kitten.  Fun to watch, but not necessarily productive.  Finally, we got it secured and she went to town rolling it. 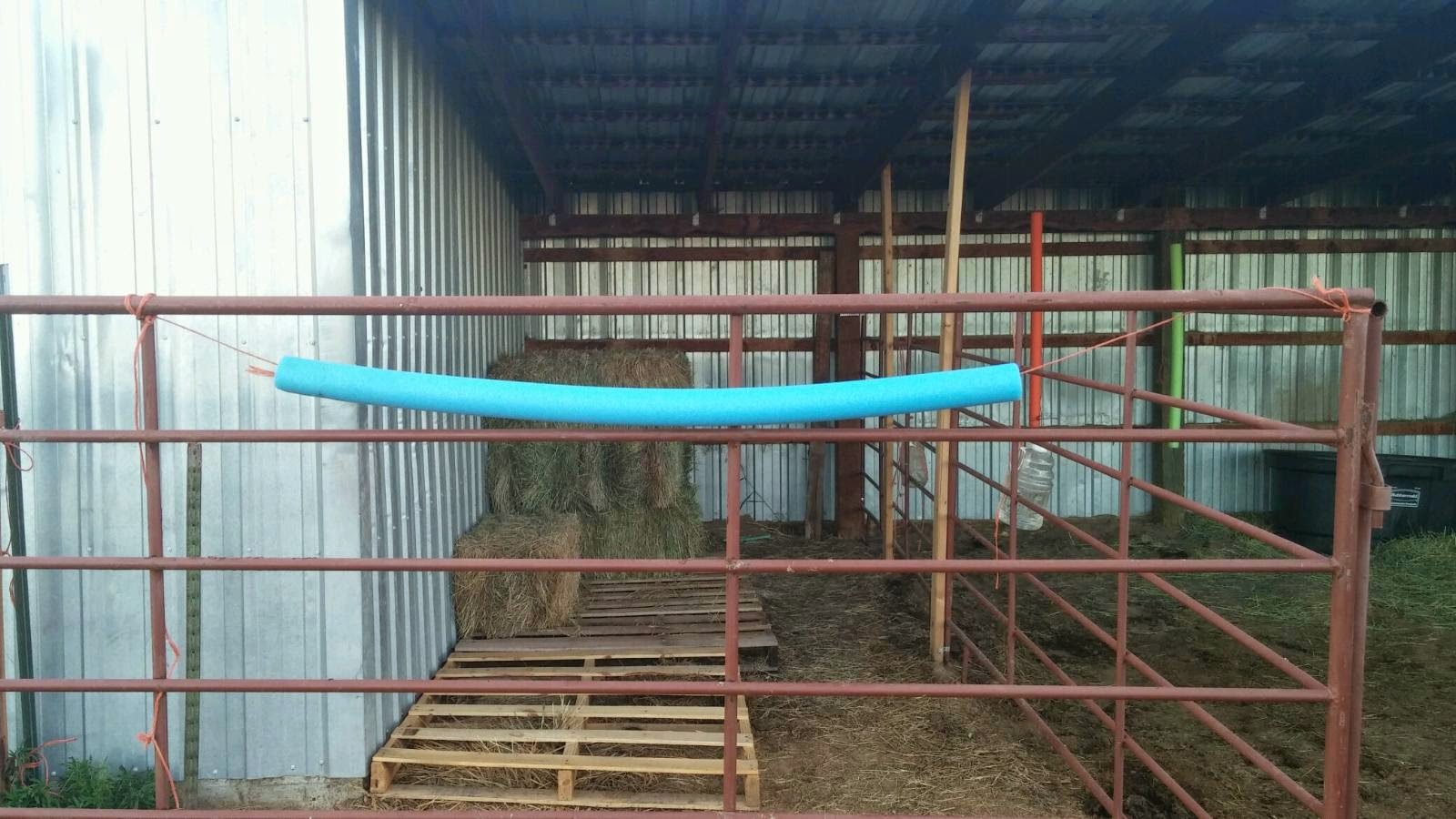 Tonight, when we go back over, we'll see how the pool noodles fared, but they were cheap enough that even if she destroys them, I won't be too upset.  If they live through the next few days, they will be used in a different training capacity once we get to the "hang crap off the saddle" stage of training.

We'll also tie the tarp to one of the outer panels this evening so she can get used to the sound of it before I start "torturing" her with it.  God willing, she won't eat the tarp once she realizes it won't kill her.

On a slightly different note, I have a question for you: who has used automatic bug foggers/sprays?  The flies are pretty well kept in check by the fly predators, but the other flying critters are not.  I thought I'd mount one of the automatic sprayers in her shed, but want to know if anyone has experience with them.

Update: When I went to see Skeeter today and she killed one of her noodles. 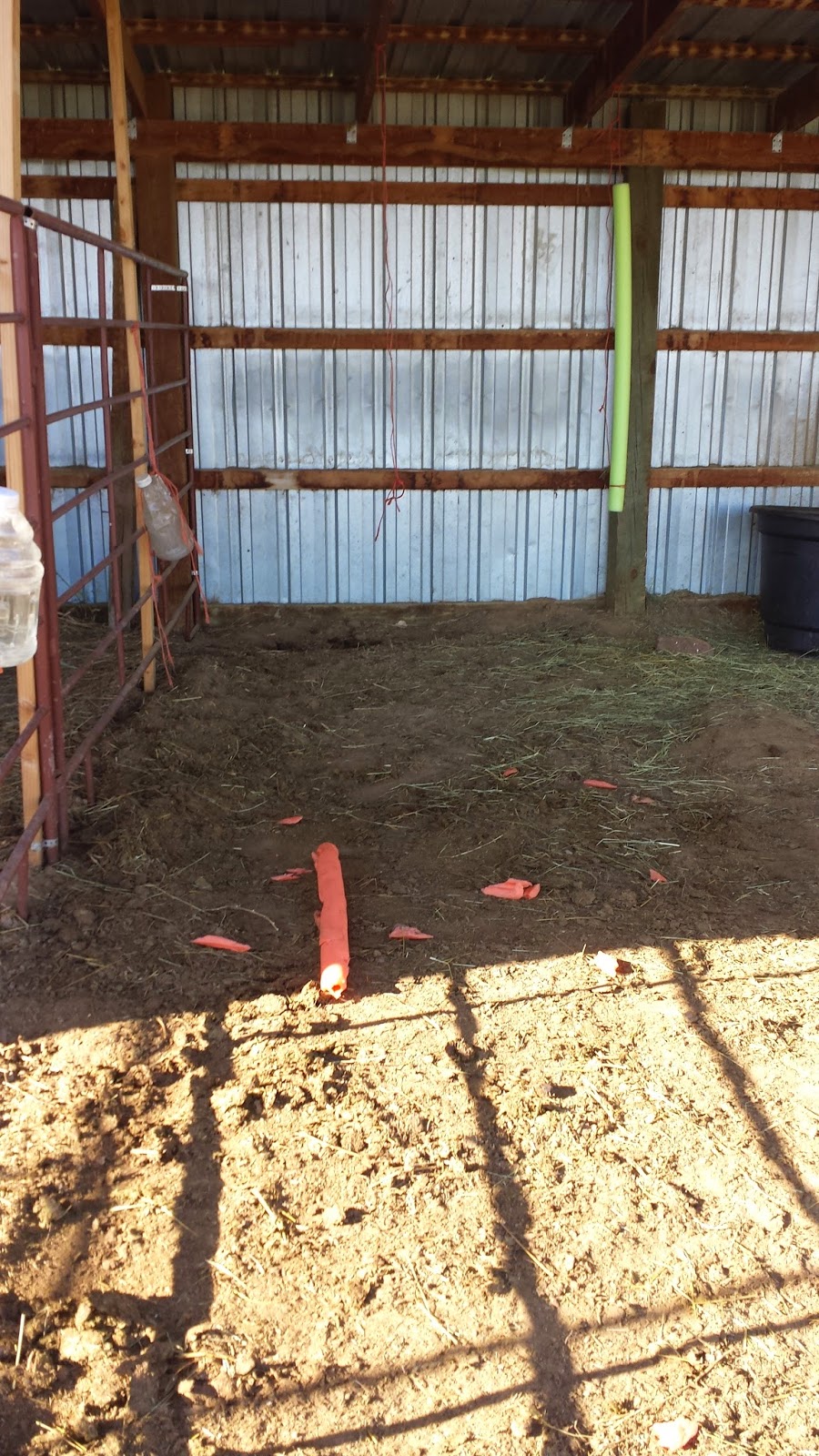 I went to pick it up, but Skeeter put her hoof on it and told me she was still playing with it.  As long as she doesn't start ingesting the noodles, she can keep them.  Right now, she's the queen of chew and spit, and I'm okay with that.
Posted by GunDiva at 11:36 AM

Rio would eat those!
Skeeter sounds like an intelligent horse- most horses who are curious are real thinkers.
Good luck with the bugs- I use a smudge when they get bad.

Skeeter sounds like such a character! I love her personality already. I look forward to following your progress. :D

I'm finally caught up! I went back to the beginning of 2013 and read all the way through current so I could see what all I missed. I got you added to my blog list so hopefully I won't get so far behind again. Thanks for commenting on my blog and reminding me hehe.

Where's the pool???? I wanna see the pool!
Skeeter's Grandma

She has to wait until payday to get a new pool.

Years ago we used an automatic bug sprayer in our porch. Wasn't much good. I'm sure they are much better now though. Great idea the noodles are.