Beel and I went for a short ride on Saturday (I know, I know, I've got a lot of other blogs I'm supposed to be writing, but I'll get around to those.  Eventually.).

Beel took Estee out earlier in the week, but only got to the top of the switch-back before he decided she was hurting too much to go for a ride and walked her back.  I know she's got arthritis and I've just been giving her enough bute to make her comfortable until she gets warmed up. Once we get those old joints moving, she feels so much better.  I liken it to the first thirty minutes of my workout - I hate it, hate it, hate it, but then everything loosens up and I'm good to go.  If we don't exercise her, I'm afraid she'll get stove up and we'll all be sad.

I haven't started her on any joint supplements simply because I can't get to Murdoch's before they close or my time is too limited when I'm racing up the mountain for a ride.  After Saturday's ride, though, Mom and I went through a bunch of supplements online and settled on a liquid glucosomine/chondroitin thing-y.  We'll give it two weeks.  If it works, I'll buy it in bulk, if not, we'll try something else.

Anyway, I buted Her Highness and gave her about half an hour for it to kick in, then pulled her to go out for an hour.  Beel finished up his chores just as I was getting ready to mount up and decided to join me.

Even though she was hurting, she didn't hesitate to step out on the ride.


We chose a fairly easy trail, what used to be the kids' short one-hour ride for the livery, but by the time we got back to the Y headed home, she was hurting a lot.  I dismounted and opted to walk her back.  She was gimpy on the wrong foot.  I'm used to her being gimpy on her club foot, but her other front foot was bothering her, as well as her left hind.  I don't get it.

I walked with her down to the creek crossing at the livery and then I faced a conundrum.  With all of the moisture, the creek is too wide for me to jump across and with all of the livery horses walking back and forth across it numerous times a day, it's a muddy bloody mess.  Beel told me I should re-mount just to cross the creek, but I didn't want Estee to have to carry my weight across and deal with the slippery mud.  Beel tried to convince me to "dead indian" it - lie across Estee's back just long enough to cross, but I thought I might be able to sneak across using the grass along the edge.  He warned me that he'd tried the same thing when he walked her back a couple of days ago and that he had sunk in the mud.

I should have listened. 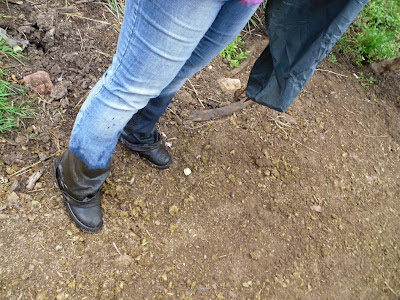 He had a good laugh and I admitted I should have hopped up on Estes for the four steps it would have taken her to get across.

I'm going to have Dr. Dave adjust her when he's up next to see if that helps loosen her hips up and hopefully we'll see some improvement with the supplement.  Until then, no riding of Her Highness for me.  I'll go up on Wednesday for my ride, but Her Highness will get ponied for her exercise, not ridden.  I suspect I'm grounded for at least a couple of weeks until we figure out what's going on with her.  I'll take video on Wednesday and post it.  Maybe you all will have some ideas.
Posted by GunDiva at 10:07 PM

Yup. Same thing happened to me.

Poor girl! She should definitely be loosened up after an easy hour ride. You're right, there's something else going on. Hopefully your chiro can straighten her out!

I hope so. She hates the chiropractor, but I'm at a loss. She was perfectly sound two weeks ago. Well, as sound as she ever is with her club foot.

Poor girl! I hope the chiro can fix her up! Shy's has done wonders for her!

I know you won't like this, but maybe it's time to find yourself a younger horse and put your beloved mare in semi-retirement. I said Semi! I'm not riding Beamer much this year because he has a mystery swelling above his left knee that won't go away. So I'm riding Gussie more and just riding him when I need to, like when kids come around.

Where's your mudder? Send some of that rain! And I read the other story first so I know Estes is Ok. Tee hee. I cheated.