I've already admitted to hand feeding Estes, though I don't do it often.  But when we're out on the trail and the mood strikes, I'll share whatever I have with her.  She was pretty sure that if I thought it was edible, then she'd like it a whole lot too.

A different day, again with Bill (my rides with my mom are so much less adventurous - in a good way), we had tied up at a hitch rack in the Wild Basin area.  Rather than trail mix, I had the Handi-Snacks Cheese 'n Breadsticks.  You know, the one with the "cheese" in one compartment and the crunchy breadsticks in the other. 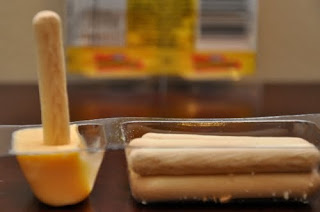 Miss Estes thought that she might like one of those little breadsticks.  So, being as trainable as I am, I gave her one.  Oh, she thought that breadstick was the bee's knees!  She loved it, so we shared a little.  I'd dip my breadstick in the cheese and eat it, then I'd feed her a plain breadstick.
She was okay with that until she realized that she wasn't getting exactly the same thing I was eating.  When I offered her the next breadstick, she very pointedly looked at the cheese, "What're you trying to do? Cheat me out of something?"
Really, it was that pointed.  And, being trainable, I scooped up a good bit of the cheese on the breadstick and offered it to her.  She took it and immediately her eyes bugged out of her head.  She curled her upper lip back, which had the cheese on it, and shook her head trying to get rid of the cheese she had asked for.  When the cheese wouldn't come off, her eyes got bigger and you could see the wheels in her little brain churning.
She tried backing away from the offending cheese, but was tied fast to the rail, so she didn't get far.  She tried shaking her head and snorting, but that nasty cheese just wouldn't come off.
By this time, Bill and I were practically peeing ourselves laughing at her, so neither of us was any help at all.
I can still plainly see in my mind the moment she saw the upright for the hitchrack.  Her eyes locked on the upright and she thrust her head toward it.  It took me a second to figure out what she was going to do; about the time I figured it out, she was already busy scraping the cheese off of the inside of her lip with the upright.
I can't recall when I've ever seen that little mare look so proud of herself!  Once she got over her moment of pride, she gave me a look that clearly said that she couldn't believe that I would eat that crap.
I offered her a plain breadstick as a peace offering and that little brat had the audacity to turn her nose up at it!  I'm pretty sure she hasn't eaten one since.
Posted by GunDiva at 11:34 PM

I think I love your horse. That is great.

if i were a horse I would probably be estes. :-) loves ti!

Too too funny! Such a smart girl though. Who says horses don't have deductive reasoning. LOL

I was riding a friend's horse Spic on an endurance ride in California, and got off to walk down this long rocky road. I pulled out a Luna bar and was eating that, and Spice wanted a bite. I gave her one, then she wanted more! so we shared to Luna bars as we walked down the trail. geek!
- The Equestrian Vagabond