Wow, my last post was kind of a downer, wasn't it? Yikes. I guess I should have been better about updating the blog. I've posted snippets on the FB page, but haven't taken the time to sit down and write an actual blog post. Skeeter's doing amazing on the mountain, Pearl is doing amazing in her lessons with L.E., and Copper and I have taken on a new project.

Since Copper's got a hitch in his get-along, we can't ride him much (in fact, I think he's only been ridden twice this year by Mom and Autobot). However, he still needs exercise. As much as he loves being a pasture pet, the lounging around and eating all day isn't good for him, so I knew we needed to start doing something with him, I just didn't know what.

Just over a month ago, I was working at the range and was carrying a case of ammo from the storage room down to the deck and was dying. So very out of shape. I mean, I knew I was out of shape, but being surrounded by a bunch of fit cops will really drive the point home. As I was huffing and puffing, trying not to show that I couldn't breathe, I decided I needed to join a gym, so I started thinking about it. There is an incredible community center that is very reasonably priced about five miles southeast of our place, but I knew I would not drive past our house to go work out. I needed something closer. I had pretty much decided on re-joining the gym that is on my way to work, but hadn't actually stopped in.

Scrolling through Facebook one night, I saw an ad for a virtual race. Normally, I would have scrolled right on by, but the theme of the virtual race piqued my interest and I looked a bit deeper into what a virtual race was and what it entailed. I could pay my registration online and run the race wherever I wanted to. A plan began to form. I could kill two birds with one stone here - Copper and I would both get the exercise we desperately needed and the X-Files-themed race made me happy. Before I could chicken out, I registered both of us for the race.

I dusted off my Ease Into 5k app and we were off!

Who am I kidding? Nothing's that easy.

Copper's well trained in ground work. The kid knows how to lead at all gaits, so I didn't think there would be a problem. I was wrong. While he enjoyed the walking part of the training, the running part was a ... challenge. I completed our first two training runs with a 1000# anchor. You know those crazy people who run with parachutes attached to them to increase their resistance? Yeah, this was kind of like that, only the resistance was in the form of a cranky gelding.

Only, I can be a lot crankier than he can, and by our fourth training run, I was D-O-N-E with his attitude, so we went to work. When he balked, he got to do some circling exercises, and then I started driving him from the shoulder during each of the run portions of the training. It's a lot more work to have to run in circles than just jog alongside Mom, is what he finally decided. I still wasn't able to do much more than a quick shuffle during that training run, but at least I wasn't dragging a boat anchor behind me either.


After a couple of days to think about it, our fifth training run went much better. I still had to drive him, but circles weren't necessary and for the first time since we started running, I was able to RUN. Leg-stretching, lung-burning run. It felt wonderful - and I *hate* running. The euphoria came from not having to fight him. I swung the end of the rope at his shoulder, clucked and he stepped up into a nice trot. It was heavenly. You know, for running, which I hate.

Once he understood that he was going to have to trot whether he liked it or not, he began to enjoy it and my workouts got a lot harder! Running next to a trotting horse is HARD! Like, really hard.

Two to three times a week for the last four weeks, we've been doing training runs. Copper is enjoying them far more than I am now. I still have to "encourage" him with our first run each time out, but then he trots alongside like a well-trained dog. Once or twice he got charge-y and pulled on the lead rope, but making him back quickly fixed that. It's funny, I literally have him dragging his feet behind me during our five minute warm up, and then after our first run interval, he's looking for excuses to trot. Traitor.

A couple of weeks ago, I was physically hitting a wall. Getting up to go running was an incredible chore and it took everything I had to lace up my running shoes. I was considering scratching from the race (and losing the $54.00 in registration fees), but a little bit of retail therapy lit the fire under my butt again.

I'm still not completely thrilled with this whole running thing, and wish I could say after a month that I'm feeling stronger physically, but that would be a lie. However, Copper *loves* it, and psychologically, I feel good. If only my 47 year old body would get on board that would be great.

Technically, tomorrow is race day, as it's the 25th anniversary of the day X-Files was released, but the beauty of virtual races is that you can do you race at pretty much any time. I have work and Posse stuff tomorrow, so I chose to do the run today. My sister Nebalee, and my niece Asset came out to run it with us, which was fun. 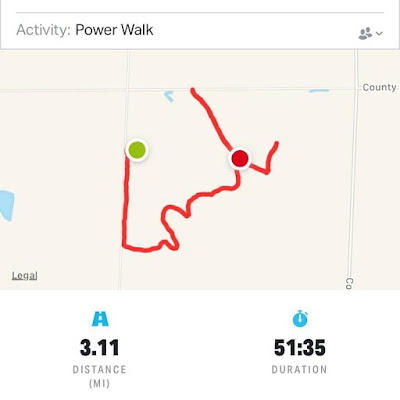 Nebalee and I found discrepancies between our GPS apps, so we went with her Map My Run app for distance, which thousands of people use for race reporting. I reported the time from my stopwatch app, which is five seconds faster than Nebalee's app and I don't know why. Not that this is a sanctioned race, so it doesn't really matter.

What matters is that Copper and I did it. There were times when I was sure it wasn't going to happen, and we did a ton more walking than running in this 5k, but we did it. We have another virtual race scheduled for October 6th, and I'm looking at one for the end of October before we hang up our running shoes for the winter. Copper may not be able to earn ribbons in riding competitions, but he can earn his 5k metals, and we'll proudly display them next to anything Skeeter and Pearl earn.

Wow! Congratulations!! That was a great idea. Anything is a bearable if you have a horse with you...even running. 😂

Linda, I've thought about doing training runs without him and I just can't bring myself to do it. Having my big red dog makes it tolerable, though the last training run on Monday wasn't great. Even then, it was tolerable.

Congratulations... to both of you! I think it is great that Copper has to do some work!!

You're an inspiration! I am also 47 and starting a new carrier as a medic and I'm not fit enough to carry people around so I need to do something, but taking a bus to a fitness center is not gonna happen. I wonder if I could do what you are doing.

What makes me even consider it (I never run) is my horse. It's his favorite thing on earth to trot next to a human who is running. Vet/farrier trot-outs are like taking him to a horse show, he puts his tail over his back and prances, which makes the vet laugh. My horse would be so happy if I could do that with him....

Do I need a smartphone to do it?

Lytha, I do think that you need a smartphone to download the app that I use. I use the EaseInto5K app, but there is also one called Couchto5K. I believe both are free. We haven't been running in the last couple of months, once it starts to get dark early I run out of light before I even get home from work. Copper and I will pick it up again in the spring once we have more than just a few hours of sunlight (and when it's consistently warmer).