Preparing for a Grand Adventure

We haven't said much, because things are just now coming together, but if all works out the horses will be going on a Grand Adventure and we are crazy excited about it.

In January, when Mom and Beel were headed to pick up Alloy, our friend Bucky messaged me and told me to put my horses on the trailer down to his place. Of course, it was way too late to do that when he messaged me, but it did plant the seed.

The Mustangeers need wet saddle blankets, and a lot of them. Bucky runs a dude ranch out of southern Arizona. He's going into his busy time and short on horses. Mom and Beel talked it over with Bucky and his wife to see if they were serious. We were certain they were because Bucky never says anything he doesn't mean, but before we put the horses on a trailer his direction, we wanted to double check. (And we thought it would be a good idea to run it by Mrs. Bucky before we showed up with three extra mouths to feed.)

Turns out this is a mutually beneficial agreement and the horses will become "snow birds" in a week or so, which brings us back to the vet visit.

I was a bit worried about catching Copper, because he's either really, really easy to catch or a complete ass - there is no in-between with him. I decided to catch him first instead of giving him a chance to get upset when I took the girls out one by one. I also decided to stack the deck in my favor and went into the pen with his very favorite brush. He can be a brat, but he's a sucker for a good brushing. He was a breeze to catch, which I took as a good omen.

The vet asked if it would be okay to sedate the horses. At first, I was hesitant, because they were just getting vaccinated and they've always done great for him, but he explained that it was a "needle heavy" visit, so I agreed to sedation.


The vet visit went beautifully. They were saints, even before the sedative, but the drugs made the visit go much faster. They got a four-way, plus rabies, plus strangles and blood pulled for their Coggins. Once their blood work comes back clean, we'll be one step closer to getting them to Bucky's Boot Camp for Lipid Enriched Equines.

After the sedative started wearing off, Skeeter decided to tell everyone what happened at the top of her lungs. The neighbor horses got a blow-by-blow recitation of her vet visit, and I'm sure they were thrilled.

This morning, I looked out the bedroom window and saw this ... 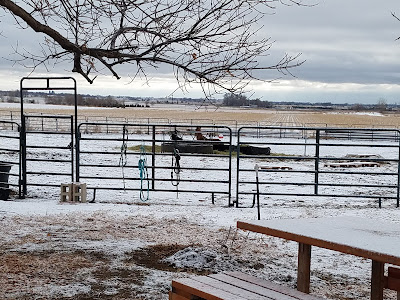 In case you can't see through the fence and feeder, Copper and Pearl are lying in their hay while eating it. They're taking full advantage of their post-vaccines sick day. Turds. 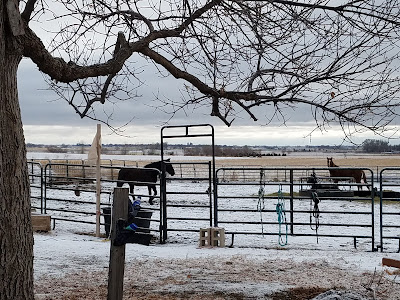 Skeeter made a point to come out of the shed to show me she was a good girl and Copper jumped up once he realized he'd been busted lying in his hay. Pearl didn't give a single damn and continued to eat breakfast in bed. Brat.
Posted by GunDiva at 3:05 PM

Wow! That's cool! How long will they be gone? Where in Arizona? Tombstone area? My grandmother homesteaded a farm between Tombstone and Bisbee, but she died in childbirth. We went back there a few years ago. It's all desert!

@Linda - they'll be down there until May, in Pearce, AZ. It's near Tombstone, sort of. They'll be at my friends place, Blue Sky Ranches.

@Jennifer - yep, they'll be dude horses after their boot camp. Bucky laid out their training plan this morning - they'll make sure the horses are dude safe before they go on the dude string.