Mom and Bill hauled the horses down today to do something we've been planning for a while: go for a ride on the farm road. It's not a big deal for their horses, but it is a big deal for ours. Besides, we have a brand new hitch rail to break in!

First things first, though. We had to put out a new bale, which meant that we got to try out our new anchor post.

Until two days ago, unloading the round bale required us to wrap a ratchet strap around one of the support posts for the shed, attach it to the tow rope, and then driving out from under it. It was truly a two-person job. This anchor post makes unloading practically a one-person job. You know, if the horses would ignore the fact that a new bale was being unloaded, it would be a one-person job.

Mom and Bill hauled their horses down and had them tied to their trailer, so we had three fewer "helpers" than we normally do with putting out hay. It was all Very Exciting, and the 3 Mustangeers had to move their feet. Between having visitors and getting a new bale, they were beside themselves.


Once they were all settled down (read: had their faces buried in the new bale), I pulled Skeeter to put her to work. Eventually, we'll take all three of them out on the farm roads, but we had only three riders and six horses. Some had to stay behind. Leaving any of Mom's herd behind was out of the question.

Skeets did amazing being hard tied to the hitch rail, though I was always in her sight. I've been saddling her one-handed for so long that she wasn't excited about being saddled while tied, but didn't move around too much. With more practice, she'll remember to stand still. 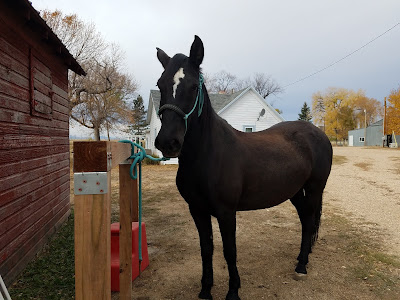 I decided that her black bridle was never going to adjust small enough to be comfortable for her, so I changed to a different headstall that I could adjust better. Even that was too big, so while I went digging around for the leather punch, I handed Skeeter off to Mom and Bill to get a crash course in being ponied. 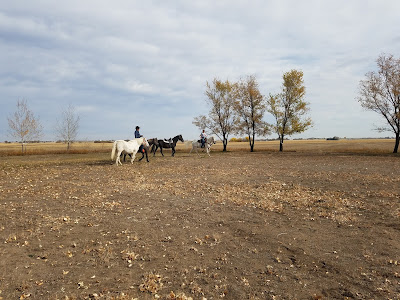 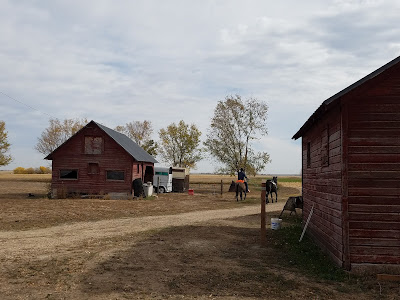 It didn't take long to fix Skeeter's bridle, so I sent her in a couple of circles just to see where her mind was. She was ready to go.

But she didn't want anything to do with the mounting block (yeah, we need to work on that), so with the success of mounting from the ground under my belt from Posse training, I decided that I'd just climb aboard. Little missy had other ideas. She forgot how to keep her feet still and at one point threatened to bite me, so she got to move her feet a lot. There were a handful of times I could have just pulled the running mount out of the archives, but there's no need for that. I don't want to have to spend time breaking a bad habit in the future, so we worked through it.

Foot to stirrup - oops, you moved off, now you work.

Foot to stirrup - oh hell, no, you did not just nip at me, now you work.

Foot to stirrup - you stood still, good girl, back off.

Foot to stirrup - oops, you moved off, now you work.

Lather, rinse, repeat. I have no idea how long we were at it, but Mom and Bill's horses were very patient while we worked through it. Eventually, Skeeter stood still through the whole mounting process. She did move off before I could get my right foot in the stirrup, but my butt was in the saddle and I was settled, so I just pulled her to a stop.

I moved her feet a little bit, doing figure eights both directions in the back yard until I felt calmer and her feet slowed. Once we were comfortable, Mom and Bill joined us in the yard and we practiced wandering around individually, then we followed their horses, and walked side-by-side with Ranger Danger.

I would have been perfectly fine riding in the back yard, but Mom and Bill came down to be my support crew on my first ride off property, so I sucked it up and we headed to the road. I'll admit, I was stressed and worried. Why, I don't know. Skeeter has never been "bad", she's a bit pushy on the ground and unafraid of lots, but she's never given me any reason to doubt her. 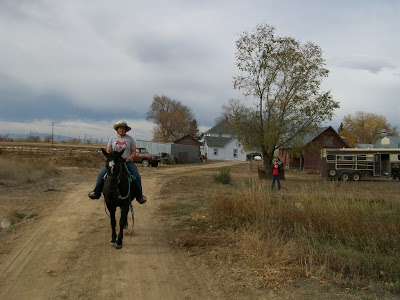 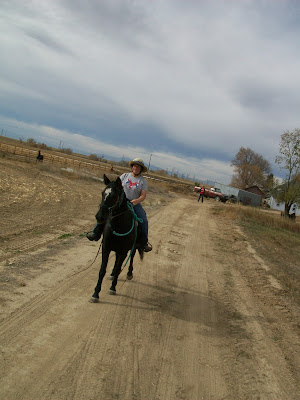 Skeeter completely ignored the fact that there were three other horses with us. On one hand, it's great because she's got the confidence to go out by herself. On the other hand, I've never had a horse so thoroughly ignore other horses in a group. She basically did the same thing at Posse training.

I kept her to a slow(ish) walk, though she really wanted to stretch out and go. I know I'm slow to trust her, and that's my issue, but we'll be working at a walk for a while yet. We rode out only about half a mile. Mom and Bill and their horses could have gone a lot further (and they do at home), but that's about all my nerves would take. I never used to be a nervous rider, but now I can't seem to get out of my head.

Not knowing how Skeeter would react riding home with Copper and Pearl being flying goofballs in the pen, I elected to dismount and walk back. Only ... I have an issue with dismounting that is a new issue. The last two times I've dismounted from the left side, Skeeter has kicked out and I've gotten one of the ridges of my boot caught on the stirrup and haven't been able to get free. I can dismount on the off side no problem. She doesn't care, I don't get hung up, and life is good.

I started to dismount the proper way and just froze - I couldn't force myself to do it. So, I dismounted from the off side. We'll be working on getting us through our dismounting issues in the future, but the ride was going well and I didn't want to screw it up.

We followed Mom and Bill back without a problem, though Jesse wasn't so excited about having us follow them. 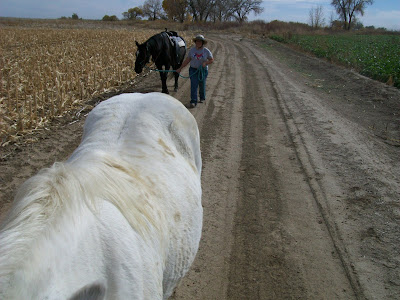 Being on the ground gave me a free hand to take a couple of pictures of Mom and Bill riding together, which made me happy. 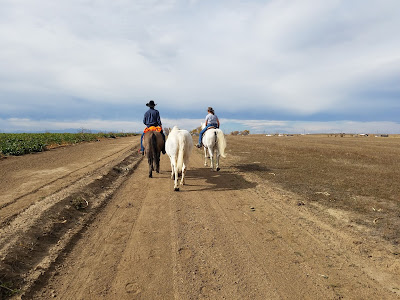 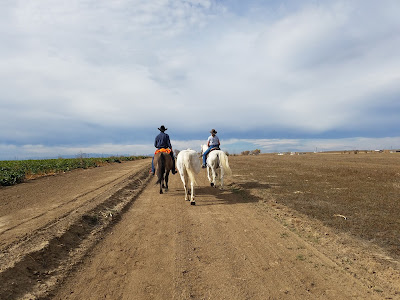 About halfway home, I realized that I'd inadvertently signed myself up for cardio and who wants to do that? They offered to wait while I re-mounted, but that sounded like a whole lot of work. More work than walking.

When Nebalee and Deejo were gymnasts, the gym had a rule about "one last time". Once you finished a trick, you never did it "one last time", because that's when you'd get hurt. I thought it was a good rule and passed it on to my kids. In fact, every time they did something "one last time" someone ended up hurt. I wasn't willing to risk the "one last time" by climbing back up on Skeeter after I'd declared our ride finished.

After our ride, we turned all the horses out together for a little dinner buffet. Introducing the two herds a couple of months ago paid off - there were no fireworks. They all bellied up to the hay bale and dug in. 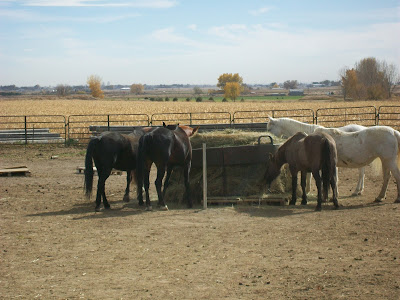 Once Upon an Equine said...

Breathing is the best...if one can remember to do it. :-) I had a couple surgeries this year and had trouble getting my oxygen up in recovery. My husband reminded me to follow my dressage instructor's advice. He said, "Do what Anna always tells you...breathe, breathe." Looks like advanced autumn there. Glad you had a nice first ride off property. Well done.