Yesterday was an unexpected snow day for us! I was so excited to have the whole day off of work and had dreams of being able to take Skeets for a long walk on the farm roads in the fresh snow.

Riding in snow is one of my all-time favorite things to do. There is something so calm about riding a good horse in fresh snow - it's very peaceful for my soul.

I didn't dare to hope that I'd get to ride yesterday, but I did hope for a nice, long walk.

I made Skeeter some warm beet pulp and took it out to her, thinking we'd work after she had some breakfast. 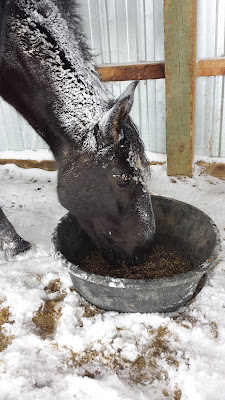 She was pretty thankful for her cereal. Since she's been back from Jessica's, I haven't been giving her beet pulp because she came home at such a great weight and had a whole round bale to herself. Once I got a good look at her, I was glad I'd taken the beet pulp out to her. 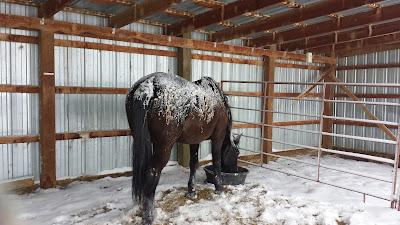 I still had plans on taking her for a walk at least, but those plans went right out the window when I realized how spooky she was. She was careful not to run me over, but several times, she spooked and bolted. I suspect the storm brought out the chupacabra and she was smelling it on the wind. 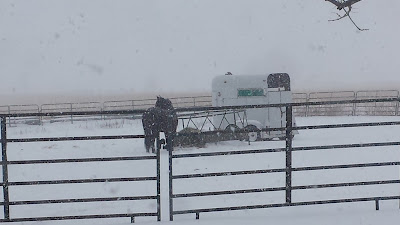 Whatever critter was out there had her watchful and on edge most of the day. We'll have to try again for another work day. Maybe Friday we can have some work time. 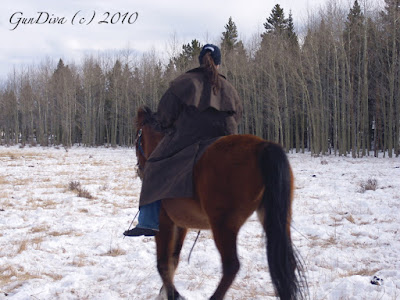 Going from a 23 yo extremely well broke horse to a 5 yo green broke horse is going to take some adjusting - but it happens - and way too fast! My little girl turns 15 on the 1st and I am panicking at not being able to ride her (or just be with her) nearly enough! Enjoy every 10 minute session you can have - because the years start flying by.
Bionic Cowgirl

I just found your blog a couple days ago and am now going back and reading it from the beginning, the wrangler stories. Oh my goodness what wonderful stories! I can't pull myself away, I spent most of my day soaking in the tales, the experiences you had. I also enjoy the guest blogs and discovered one of them is from a Christian Seattle blogger.

I've never been to the pretty parts of Colorado but now I know, from your images, what they look like.

Welcome, lytha!
I'm glad you're enjoying the posts. Many of them ended up in my book, TALES FROM THE TRAIL. (Yes, shameless plug.)
The blog has changed quite a bit over the years, and posting is much more sporadic than it used to be, but I'm sure it will pick up as Skeeter and I move forward with our training.