Last Sunday, we had a great ride and I have a ton of amazing pictures, that I'll get posted but since today is Father's Day, I thought I'd skip ahead.

We (the entire family) planned on a Father's Day dinner with Bill, but I wanted to get up early and go for a ride.  Mom had planned on letting Bill sneak out of work to go for a ride, as it's Kyzzer's weekend to work at the Lodge.  My youngest, Monster, also volunteered to help out so that Papa Bill could go for a ride before everyone else got there.

Digger decided that he wanted to go for a ride, too, so we grabbed Ranger Danger, Washoe the Wonder Idiot, and Her Highness, Queen Estes.

In honor of the day, this is a Bill and Ranger picture day.  I'll share the rest of the ride pictures at a later date. 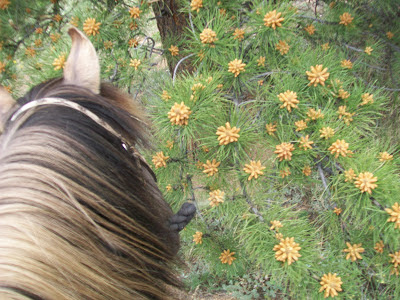 I did notice Ranger was 'ready' for the head-boot this time, just in case.

We had a great BBQ with the family.
Bionic Cowgirl

So I have never seen ears like Ranger's ears. Sort of curling together at the tips. They are too sweet.

Looks like a pretty darn perfect Father's Day - glad you got to enjoy it!