Just Me and My Mare 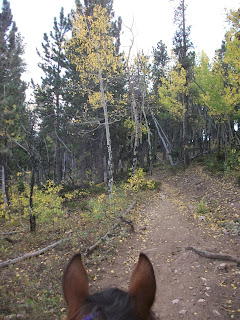 Her Highness and I went out today for a leisurely ride all by ourselves.  I know you're always supposed to trail ride with a partner, but I have to tell you, there's nothing quite like being out on the mountain alone.

I love riding with Mom and Bill. Love, love, love it. But I also love going out on my own.

Since the season is over, the trails are quiet.  I'm pretty certain that we were the only ones on the mountain today.  I didn't hear or see anyone else, not even hunters.  Which is good, because I forgot to put my orange on.  We just meandered around - it didn't feel like we were gone very long, but we were gong long enough that Autobot and Kyzzer got worried.  They thought we were just going around Ski Road - they were pretty relieved when we wandered back home an hour and a half later.

Ida does something with her horses that I don't believe a lot of people do.  When her horses are young, just a couple of years old, she turns them out by themselves for a few months.  When I say by themselves, I mean, alone.  No other herdmates.  They run "wild" with no one to depend on.  I know it sounds horrible, awful and mean.  However, it instills her horses with a sense of independence and confidence that is unmatched.

Mom and Bill took their horses on vacation - Estes was left behind and she didn't care.  She's absolutely relaxed being by herself.  She earned that confidence when she was young - it was an amazing gift that Ida gave her.

In fact, Estes is so relaxed by herself that she could give a damn if I'm there or not.  The only time she looked stressed at all today was when I took her out of the pen and tied her to the rail.  She was pretty certain that the rest of her herd has been magically tied to the hitch rail for the past week, so when we got to the rail and her herd wasn't there, she bitched me out a little bit.  After a couple of good bellows, she calmed down.

The damn livery had our gates and the access trail blocked (again), so we had to ride up through town to get to the highway.  Estes took the change in stride, and marched on out.  Once we hit the switchback, she called for the herd once or twice and then gave up once she realized we were alone.

Then she kicked back and we just meandered.  It was awesome.  I love that she is confident enough to go out by herself and wander with me.  I think we'll need to do it more often next summer, if she's up to it.

Estes is a fairly aloof horse, she doesn't cuddle much, not like some horses I know.  She'll show affection to people she knows, but she's not a cuddle bug.  Because of this, I was pleasantly surprised with the really long, big hug she gave me when we got back from our ride.  She'll tolerate hugs from me.  On ocassion, she'll even relax enough to rest her head on my back.  Even rarer, she'll wrap her neck around my shoulder and give a hug.  Today, I got one of those lovely hugs.

Of course, she might have been looking for treats.
Posted by GunDiva at 10:36 PM

Sounds wonderful!
I think Ida had a good idea. We have some (most) horses at our barn that are so buddy sour, it drives me nuts! Or when they don't see another horse, they get crazy.
Shy is not cuddly, either, but she tolerates me.

What an absolutely interesting philosophy--letting them out on their own. I like it. The best rides I ever had were alone with Cowboy along the Snake River. The alone rides are where we became a partnership. And I would take my phone with me...just in case--though it didn't always have reception.

Ida's brilliant with this alone time :) The horses don't even get human interaction - she goes out and checks on them, but they must be completely independent. The have to forage their own food and find their own water - she's not hauling it out to them twice a day. And then, each winter, she turns the herd loose to fend for themselves on hundreds of acres. Our herd winters with hers - it's so good for their minds to have some time to just be horses.

Wow. I'm not sure I could survive Ida's process with my horse - I'd miss her too much! :) But that is amazing what it does for those horses. Wow.

And that hug... just totally vicariously melted me!

Wow, I had never thought about turning them out by themselves. I will be honest...I see the benefit, but I would have to get over 'me' and how 'I' felt about it. :-)

Wyoming, one of my mustangs, is not a lover at all. We have an agreement. He lets me love on him and he acts like he likes it - then we hit the trail so he can get out to move and see things.