Around the Block with Asset

Yesterday I went up the hill for a quick ride.  I wasn't able to ride last week, so Queen Estes was getting antsy about not working.

Asset, until a year or so ago, was afeered of horses.  I managed to get her to just sit on Estes on Mother's Day last year - since then she's decided that Estes is a pretty good horse.  I'm kinda partial to her as well.

Asset was so excited about going to see the horses that she "helped" me with my boots.  By picking them up and dropping them repeatedly in my lap while I was talking to Nebalee.  I'm sure poor Asset thought I was taking for-ev-ah getting my boots on, but she managed to keep herself in check long enough for me to finish up with Nebalee.

I took Asset over to the pen with me and told her she had to stay outside while I went in and caught Estes.  Jesse hasn't been out in a while either and is getting stir-crazy.  I didn't want to try to keep an eye on a three year-old with two squirrely mares.  For once, Asset stood patiently outside the pen while I took Estes out of the pen.  Asset was so excited, that I just plopped her up on Estes' back and told her to hold onto the mane.

That mare of mine was so wonderful.  She walked slowly and carefully beside me back to the Lodge.  Asset grinned the whole way.

Asset then helped me groom Estes.  Let me tell you...Estes' front legs have never gotten so much attention before.

I had promised Asset I'd let her ride around the block with me, so I sent her into the Lodge to get a helmet on and mounted up on Estes.  Estee got so excited that we were going to go out - and I'm sure she thought she was done having to behave with the chillin - that she almost spun out from under me when I mounted.  I got her back under control and told Nebalee to lift Asset up to me.  Estee was dancing in place, obviously wanting to GO, but when she saw Nebalee pick up Asset, she let out a sigh, squared up and contained herself. 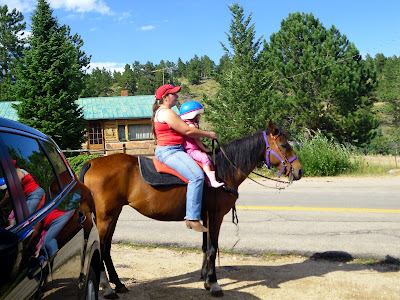 You can tell she's not super excited about the prospect of hauling a kid around, but she's getting soft in her old age.

I love my mare.

When we were done playing nice aunt and her horsie, Estee and I went out on the mountain for a quick ride with Bill and Ranger.  And by quick, I mean at one point I heard Bill behind me holler, "I don't really enjoy loping!"  And that would be because Ranger lopes like a porpoise, up and down with very little forward movement.

Last time Estee and I went out, I couldn't move her into a canter, she just kept stretching out that long, beautiful Morgan gait while Bill and Ranger galloped to catch up.  Yesterday, we went from a stand-still to a canter in about a stride and a half.  Guess she really, really wanted to get out of the pen.

Just in case you missed it earlier: I love my mare.
Posted by GunDiva at 9:22 PM

What a wonderful mare! You're not a bad aunt, either. ;)

Funder said it so well, I say: ditto!!

What a good mare! No wonder you love her. How old is she?

Aw...that was sweet. Love it when the faithful steeds take care of our little ones.