This, for me, was the hardest part.

I worked so hard to make the armor *just so* and it was incredibly beautiful to look at. I was so proud of how it turned out. 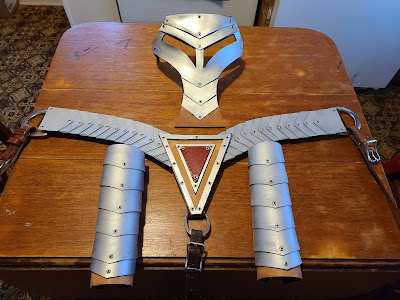 A big part of me wanted them to stay pristine and beautiful. But Skeeter is supposed to be my War Mare, so we needed to do some battle wearing. Jay is the expert here, after painting his Boba Fett rifle, so I acquiesced to his experience and let him lead the way.

It was actually pretty simple. He sprayed a thin coat of black paint on the armor, then I wiped it down with a paper towel soaked in 90% isopropyl alcohol. With his artistic eye, he could see which areas needed a light sanding as well. 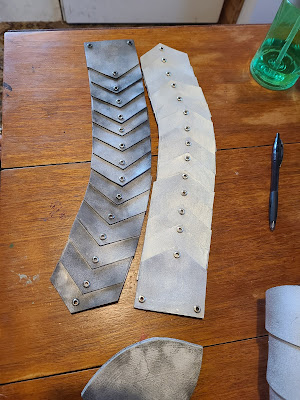 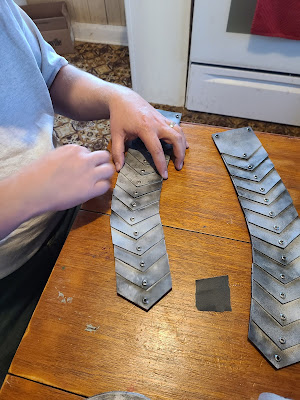 As much as I loved the pristine armor, this final step really added depth and made it look far more realistic. It's still a trip to pick up a piece of armor and have it weight mere ounces instead of what i looks like it should weigh. 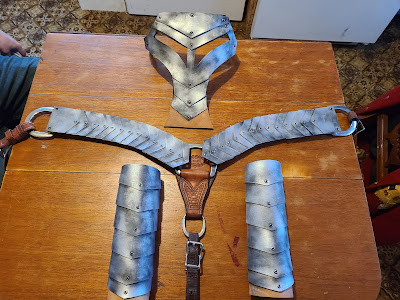 I met my deadline of completing the barding, but didn't get a chance to try it on Skeeter until a few days later, in the beginning of April.

There are some adjustments to be made. First, I didn't take into account that the breast collar would need to bend (yes, Mom, I did recall you saying that after I attached everything as it was laying flat), so the center piece's attachment points needed to be moved. 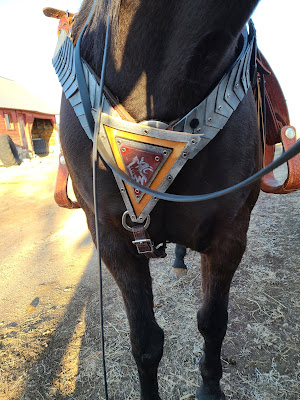 Easy enough. I just took a marker and marked where I needed to move the velcro dots to and made the change that evening.

I did get it to kind of hold up for half a second for another picture, so we can see what it'll look like when correct. 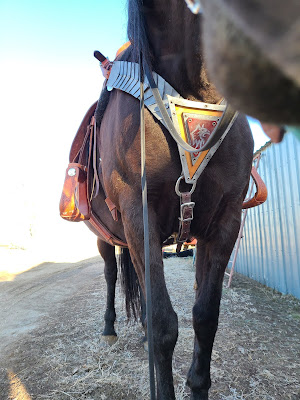 I'm kind of lukewarm about the leg guards after putting them on her. Not sure if I like them or not. I'll still put the straps on and see whether or not I like them as the time comes closer.

The one item I was looking really forward to trying on was the chanfron, but the dots and the bridle weren't playing nicely together. The best I could eventually do was mark where I needed to glue the dots. I think the adhesive on the dots just didn't want to stick to the biothane and it kept popping off. I took the chanfron and the bridle into the house and used tacky glue to attach the dots. Unfortunately, I haven't gotten back out there to stick it back on her face. I decided against having the chanfron sit flush on her face, because she hates a sweaty face, which means I'll still have to rig a strap or two to attach the chanfron to the browband, but that should be fairly easy.

After we were done playing dress up, I let her inspect her barding. She was not impressed, though she wore it very well. 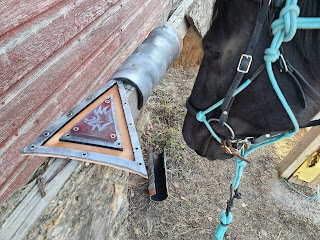 Now it's time to get started on my armor, and that's far more intimidating.