Just over a year ago, Copper and I started doing Ease Into 5K to train for a couple of virtual races. I wrote about the beginning of our journey and our completion of the X-Files 5K, but never got around to updating about our Greased Lightning race.

Again, I bought socks to commemorate the race. I was hoping to find some cool Grease socks, but when I did an Amazon search, all I could find were bobby socks. Nebalee suggested I get some lightning socks, so I did.

Nebalee also was kind enough to come run with us. For some reason, her GPS and my GPS didn't line up, but since she uses hers to keep track of her mileage, we used hers as the official distance/time. For some reason, we were almost four and a half minutes slower in our second 5K than our first. I have no idea why, but there it is. 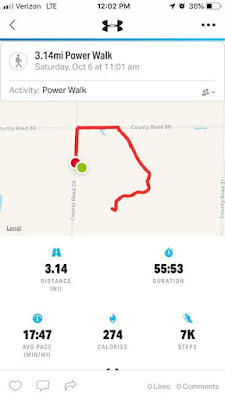 A couple of weeks after I submitted our official race time, Copper's finisher's medal came in the mail. I made him model it. He was not impressed. 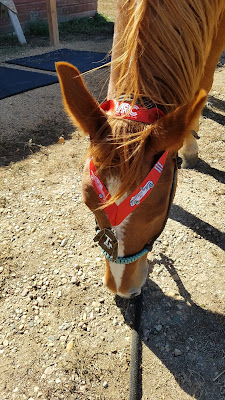 We had one more race planned in October, but I got scheduled to travel for work, so we ditched it. I can't say I was terribly disappointed, but I hated losing the entry fee.

Greased Lightning was the last race we ended up "running" in 2018; in no time at all, it was to dark to run when I got home from work, so we hung up our running shoes until spring.

For some stupid reason, I thought it would be fun to sign up for a cumulative race (121.1 miles) and set a goal to complete it by my birthday in July. It was still too cold and gross for Copper and I to run outside, so I joined a gym and spent a whole four or five trips to the gym racking up four or five miles. Since Nebalee was such a good sister and did my virtual races with me last year, I agreed to run the Bolder Boulder 10K with her in May. I figured those six miles would help chip away at the cumulative race. Unfortunately, crazy shit was happening at work and my training went out the window. I did complete the Bolder Boulder with Nebalee, but it sucked big time.

I realized there was no way I was going to complete the cumulative race by my birthday, so I threw that goal out the window and once life settled down, started back up with Copper in July.

Slowly but surely, Copper and I started chipping away at the miles. Sometimes, Copper and I go out by ourselves and do some run intervals. Other times, L.E. and Pearl join us and there's no running involved (I kinda really like those mornings). 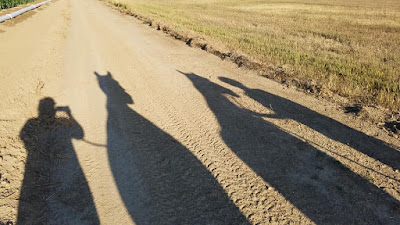 Slowly but surely, with almost daily walks, we're making headway with on our race.

I took a screenshot on 8/5 of our progress, so this is a little outdated. As of today, we've completed 32 workouts, 45.5% of our race, 55.1 miles. I was disappointed that we were not able to walk today because last night's storm turned the farm roads into a muddy, mucky mess. Hopefully, tonight's storms will bypass us and we can be back at it tomorrow.

Last week, Facebook memories was kind enough to show me our first night of Ease Into 5K. The caption still holds true!
Not only does the caption still hold true, but Copper still hasn't gotten past the fact that I literally have to drag him for the first few minutes of our walks. I wish I was kidding, but I'm not. He hates the beginning of the walk, but then loosens up and walks/trots nicely next to me.


I tried to officially start Ease Into 5K the other day, after doing a month of my own random walk/run intervals, but it did not go well. Copper was in a mood and it was like we'd regressed a full year. I was Not Pleased. We'll start again on Monday, after we've had a few more walk/runs under our belt. Maybe by then his full moon pissiness will have passed.
Posted by GunDiva at 8:35 PM

Copper we'll figure it out. Copper is a good dog.