A few weekends ago, Skeeter and I had Posse training. I've been working many long hours, and haven't had any time to work with her, so Mom and Bill have been helping me out. I had hoped to get her loaded on the trailer on Friday, just as a dry run, but Wyoming moved down here to Colorado and brought its wind. The wind just wouldn't let up, and we decided not to try to load her. The wind had all of the horses riled up and we decided it just wasn't worth the fight.

Unfortunately, the wind didn't let up, so on Saturday morning, I figured I'd try to load her, but didn't have any real hope that she'd get in the trailer. Jay came out and helped - it took about half an hour and half a box of oat 'n honey granola bar bribes, but she got in the trailer without a fight. There was hesitation, and there was a lot of getting halfway in, but we didn't fight or get frustrated with each other. Under normal circumstances, I'd call it a win, but considering the way the wind was blowing, I felt like we won a gold medal.

We pulled into training five minutes before it was to start and were met by one of the trainers, who advised us of a change of plans because of the wind. It wasn't a big change of plans, but I had the option to leave Skeets in the trailer, leave her tied to the trailer, or move her to her pen while we had our meeting at a different location. I opted to leave her in the trailer. I knew she wouldn't like it, but at least she'd be safe. I put her hay net in the trailer with her and went to the meeting.

Leaving her in the trailer was the safest option, but her least favorite. By the time we were done with our meeting, she had worked herself into a tizzy and I decided that between the howling wind and her crankiness, we'd do our training on the ground. We've got time - I'm not planning on this volunteer job being a short-time gig - so I'm not in a rush to get us certified as a team. When we do get certified, I want us to be rock freaking solid.

We joined the rest of the posse in the arena for warm-up and then everyone headed over to a different arena, which has three tall walls (really the stadium seating) to block the wind. One of the trainers offered to pony Skeeter over to the arena, and I jumped at the opportunity. The other arena is maybe a half a mile away from our training arena, and there's a concrete bridge that the horses have to cross. I could have walked her across, but partnering her up with a steady eddy horse just made sense. 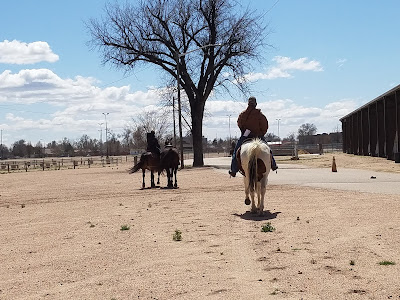 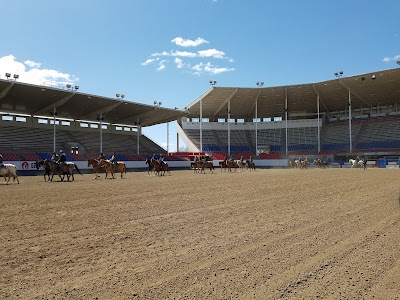 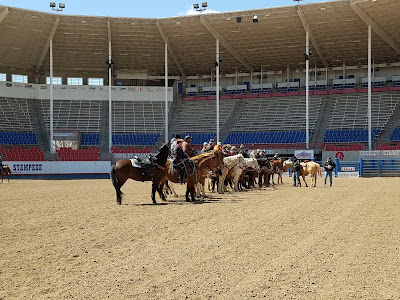 I'm so thankful that the trainer offered and was willing to work with Skeeter, who was ... distracted ... by everything going on. If the only training we got in on Saturday was the first two hours, it was so worth it. Luckily, there was still a day and a half of training to go.

At lunch time, I tied her to the trailer with her hay bag and went to the meeting room for our working lunch. Skeets was okay when I left her at the trailer, but apparently a box blew by and she lost her mind. That was pretty much my worst nightmare, but since I was already in the meeting room a quarter mile away, she had to deal with two "strangers" calming her down. She didn't get away from the trailer, thankfully, and did calm down pretty quickly.

After lunch, it was back to the other arena. There was some set-up that needed to be done, so Skeeter got left with a new "uncle" until her pony horse was ready.

Training after lunch got way more intense by adding in toys and a cop car. We've done a LOT of desensitizing with the Mustangeers. A LOT. One of my favorite things is to think of ways to torture the horses, so after a rough morning, Skeeter shone when it was time for the desensitizing portion of training. Umbrellas, tarps, giant soccer ball ... she just looked at all of those and said, "bring it".

But the sirens - those gave her pause. We just don't have many sirens out where we live, so she jumped a bit when they first started, but within minutes was fine. She circled the car both directions, touched it all over (I'm glad I didn't have to wash all of the horse prints off of the car at the end of the day), followed it as it drove around the arena and led it. (Of course, it wasn't just her doing this, it was the entire mounted unit, about 40 horse/rider combinations.) 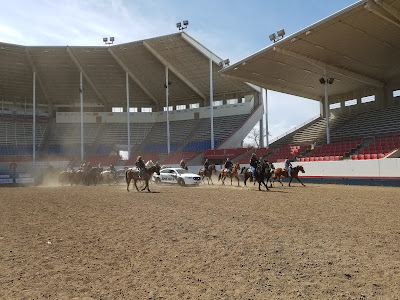 We'd had a big day by the time we called it quits and I settled Skeeter into her room for the night. 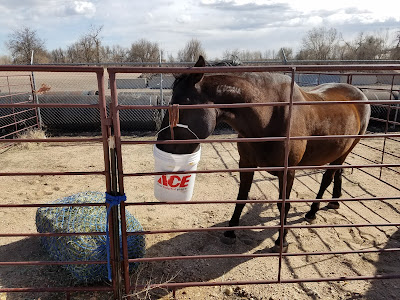 Most of the posse members stayed at the arena in their LQ trailers or travel trailers, but since I don't have either, I went home. After her blow up at lunch, it was hard for me to leave her in a stall with other people to look after her, but I knew she was as tired as I was. Maybe more so.

Throughout the day, the wind never let up.

That much wind is exhausting even when you're not trying to learn new things; the combination of the two wore us plum out, and we still had another day of training to go.
Posted by GunDiva at 9:52 PM

Dude, Wyoming wss just trying to give you some fresh air. You know with that green fog you got looming above, it is bad for the horses. Nice post and love the pics. Nice to see you enjoying yourself. And Thank You for serving!